A great idea into my head came creeping


In this magical age of YouTube, everything comes around again. These Children's Record Guild rediscoveries are recordings I thought I'd never hear again. As a kid, they were epic tales that seemed to go on forever, so I'm surprised to see how short they are, some of them having only three or four minutes per side. Though I didn't post it here because it's in four parts, the Children's Record Guild version of Cinderella is full of the music of Prokofiev. It wasn't familiar to me then (for in spite of my classical music upbringing, the only Prokofiev I knew was Peter and the Wolf), but many years later I discovered, or rediscovered the ballet and got the strangest prickly feeling all over: yes, I had heard this music before, embedded in a story, or was the story embedded in the music? It took me a while to put the pieces together, and when I hear it now I realize how cleverly Prokofiev was adapted and spliced together with a minimalized version of one of the world's oldest fairy tales. 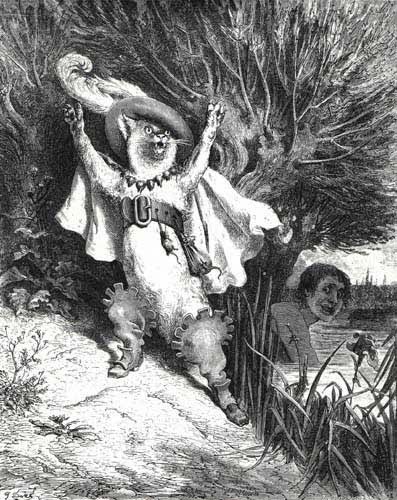 The Emperor's New Clothes, A Midsummer Night's Dream, Sleeping Beauty, Robin Hood, Build me a House, Grandfather's Farm, Pedro in Brazil, Slow Joe, Let's Have a Party, and. . . the immortal Travels of Babar, that one was the best of all:

"I am an elephant actor." (Trumpet fanfare)

Greek chorus: "This elephant actor is going to make believe he is the brave King Babar."

"I am an elephant actress." (Trumpet fanfare)

Greek chorus: "This elephant actress is going to make believe she is the beautiful Queen Celeste." 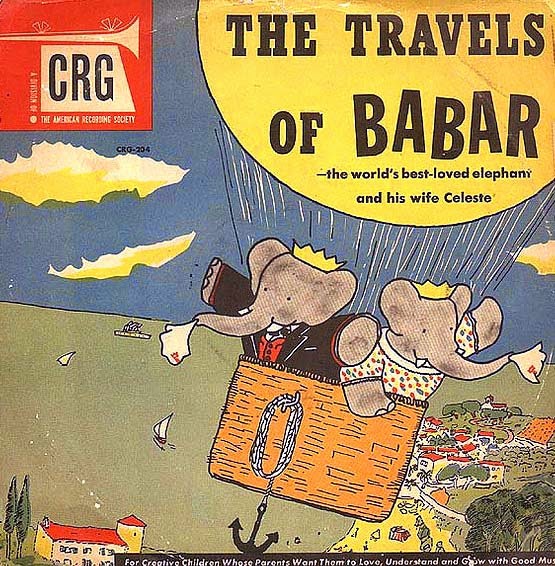 These weren't just records, they were things to hold on to, companions, a means to get away from the hell of school and the scorn of my so-called friends. They come around again now in this unlikely form, something I couldn't even have imagined ten or fifteen years ago, and they're different somehow - they changed somewhere along the line. The character of Puss, once beloved, is now a smart-ass con with a thick, nasal accent, perhaps working-class Boston or New Yahhk. The cleverness of the songs and the way the stories move right along (they HAD to, at 3 1/2 minutes per side) are more apparent to me. I'm now the storyteller, not the "tellee", so I know a thing or two about the craft.

(Next day.  All this seemed familiar, as if I had written about it before. And lo, when I went digging, I found this:)

There is another association with articulate animals: the Children's Record Guild recording of a very strange, adulterated version of Puss in Boots. We had a number of these recordings, which originally came through the mail as a sort of record-of-the-month subscription. But this set of maybe thirty or forty records was bequeathed to us by someone who didn't want them anymore. Obviously they hadn't been played much: there was hardly a scratch on them. We soon took care of that.

Through the wonders of the internet, I've found some of these records and listened to them again for the first time in more than (blblblpphhht) years. The Travels of Babar, Slow Joe, Build Me a House, Robin Hood, etc. I even found a bizarre version of Pinocchio with Paul Winchell and Jerry Mahoney which we played half to death (though my recent posting about the hellscape of Winchell-Mahoney Timeexpresses my abhorrence of that particular entertainer, who always struck me as a son-of-a-bitch).
These reborn-through-the-internet kiddie records are miraculously pristine, with no World War III going on in the background. Someone must have preserved them in a vault somewhere, or found some way to remove all the scratches. Anyway, the one I most happily happened upon was Puss in Boots, the strangest re-imagining of the story I've ever heard. Puss, a cheeky little feline in seven-league boots, adopts this person named John and somehow renders him into a Prince by wangling an audience with the King. Sort of like that. But first of all, John is totally gobsmacked by the fact that THIS CAT CAN TALK!

Here is the Ballad of Puss, which we used to sing to each other endlessly. I just listened to it again (I had to convert an unplayable MP4 file into an MP3 for this, which took some doing), and made an effort to transcribe it: for you, precious reader, the gardenia that blooms in the innermost Eden of my heart, deserve to share it with me today.
When I was just a teeny-weeny kittyEveryone told me that I looked so prettyThey said, 'beautiful eyes'They said, 'lovely fur'But all I could answer was 'meoowwww' or "purrrrrr"My coat was black, my eyes of course were yellowPeople always said 'what a charming fellow'I wanted to thank them, but I didn't know howFor all I could answer was 'purrrrrrr' or 'meow'

Then one fine day as I was lying sleeping
A great idea into my head came creepingA pussy cat that could learn to say 'meow'Could say just 'me', by leaving off the 'ow!'So I said me, me, me, me, me,Then as you plainly can seeFrom me to he to she to weWas just as simple as it could beI practiced daily for a weekAnd that is how I learned to speak!

And the following: more links to CRG recordings.

Posted by Margaret Gunning at 11:36 AM No comments:

Hello, and welcome to your first lesson in German Expressionism. Here we have a very creepy fellow who doesn't look at all like a proper vampire, but nevertheless, that's what he's supposed to be.

Here at Ten-second Cinema, we stick to the good part. It saves a lot of time. Nosferatu really is creepy but anyone's standards. It all has to do with the lighting, and the apparent stillness of the creature.

Here we have Ed Asner in an earlier incarnation, grabbing what must be a mosquito out of the air and eating it while a scientist and a dismayed constable look on.

Since it's hard, if not impossible to tell a story in ten-second snippets, I grab whatever arresting images I can find. Everyone's on edge here. Nosferatu seeks a creamy neck, and WILL find one soon.

I don't know why they don't just put him in the slammer here and now. He's obviously a pervert.

No one can explain why the titles are so crooked in this thing. But it gives away the ending. Critics have mentioned the eroticism in the story, and it's true that "offering her blood freely" is creepily - no, I won't say sexy, but fraught with something-or-other. The implication in vampire movies has always been that fear is entwined with desire. To be honest, if I had my pick, I'd choose Bela Lugosi. Or maybe even Grandpa Munster.