I try to resist cute cat videos/gifs whenever I can. but it's been a hard week, and it's only Tuesday. I literally have a pain in the ass - it hurts when I sit down- probably one of those nuts things of old age. But I loved this one, most especially the way the cat lies back at the end, displaying the elegance of the hood with an attitude of cattitude.

I just find this one aesthetically pleasing, the border around it and stuff. Cute cat, too.

AWWWWW poor dog. If I liked dogs, this would be the type of dog I'd like.

I ain't gonna work on Meow-ggie's farm no more.

What if the cat jumped off? Don't jump off, kitty.

Can anyone read cat lips?

Way down upon the Furball River. . .

How I love the smell of Meow Mix in the morning!

Posted by Margaret Gunning at 10:31 PM No comments: 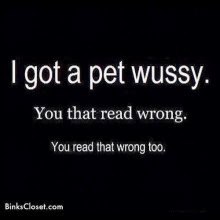 That's what they are. Dirty poems. Funny, though. Probably go back a long way. 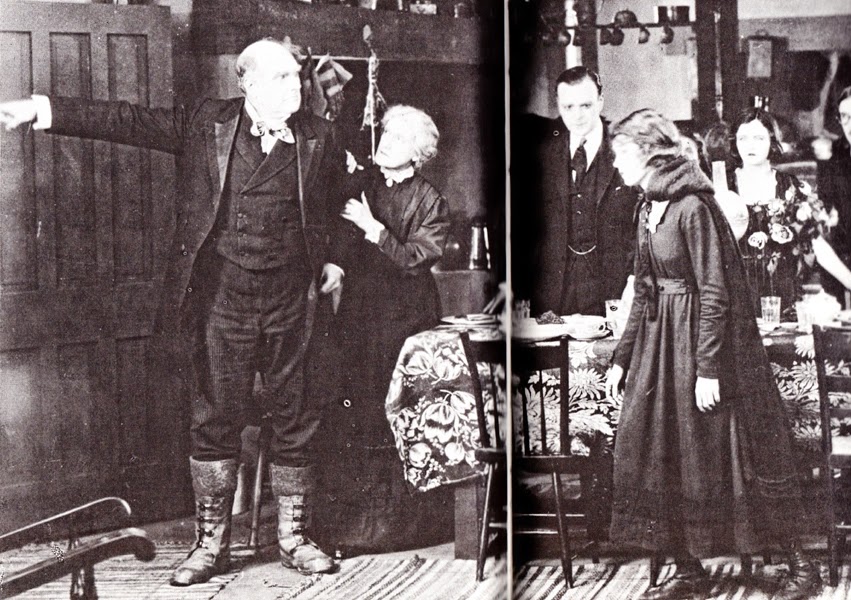 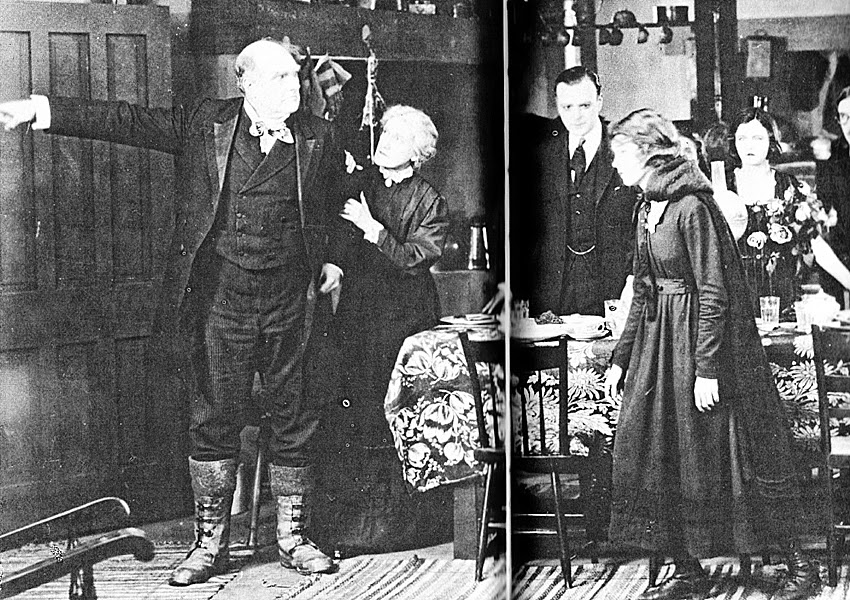 This is a most inferior way of making a point. My book The Movies, which I just received yesterday and disappeared into (I don't want to get dressed, go out, etc., but why should I anyway? Give me one good bloody reason to get dressed), has yielded up some photographic treasures, along with some duds. This was a tricky one, as it involved a classic scene from a silent movie called Way Down East. Believing she has had an illegitimate baby (and of course, she hasn't - she has been secretly married to someone the family doesn't approve of), Papa throws Lillian Gish out into the storm. I am not sure this caption even appears in the movie - I didn't see it when I watched it for the first time on TCM fairly recently. But perhaps it should. 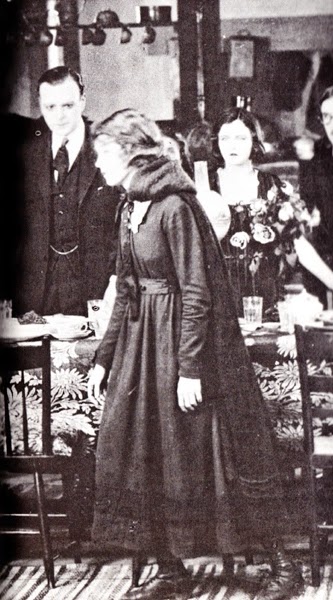 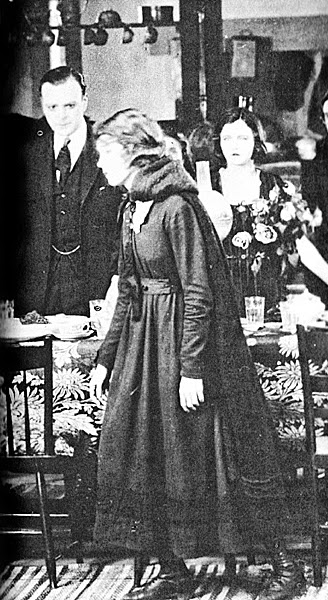 The point is, however, that only a bit of tinkering brought out a startling amount of relief (meaning detail) in this smudgy old photo. This is only fully visible when the photos fill the screen - in fact, I realize now you can hardly see the differences and this whole enterprise, which took me about five hours, was an almost complete waste.

But never mind, the differences are there, if more subtle in this reduced size. Compare the sepia-toned original with the black-and-white "corrected" version. Faces which were an overexposed wash now have some features, and some expression. Every fold of clothing is visible, such as the wrinkles in Lillian's sleeves and the folds around her waist. The tooling at the top of Papa's boots is now plain. And so on. Were all these details buried, embedded in the original? They can't have been created by a primitive scanner and ridiculously simplistic photo program. Uncovered, perhaps?

I've spent the morning on this, not even eating, my back aching. I am in somewhat of a slump. Call it "white depression" rather than black (it comes in all colours, did you know that?). So I bury myself in this. There are other surprises: how stunning some of the minor stars like Mae Marsh and Dolores Del Rio were. 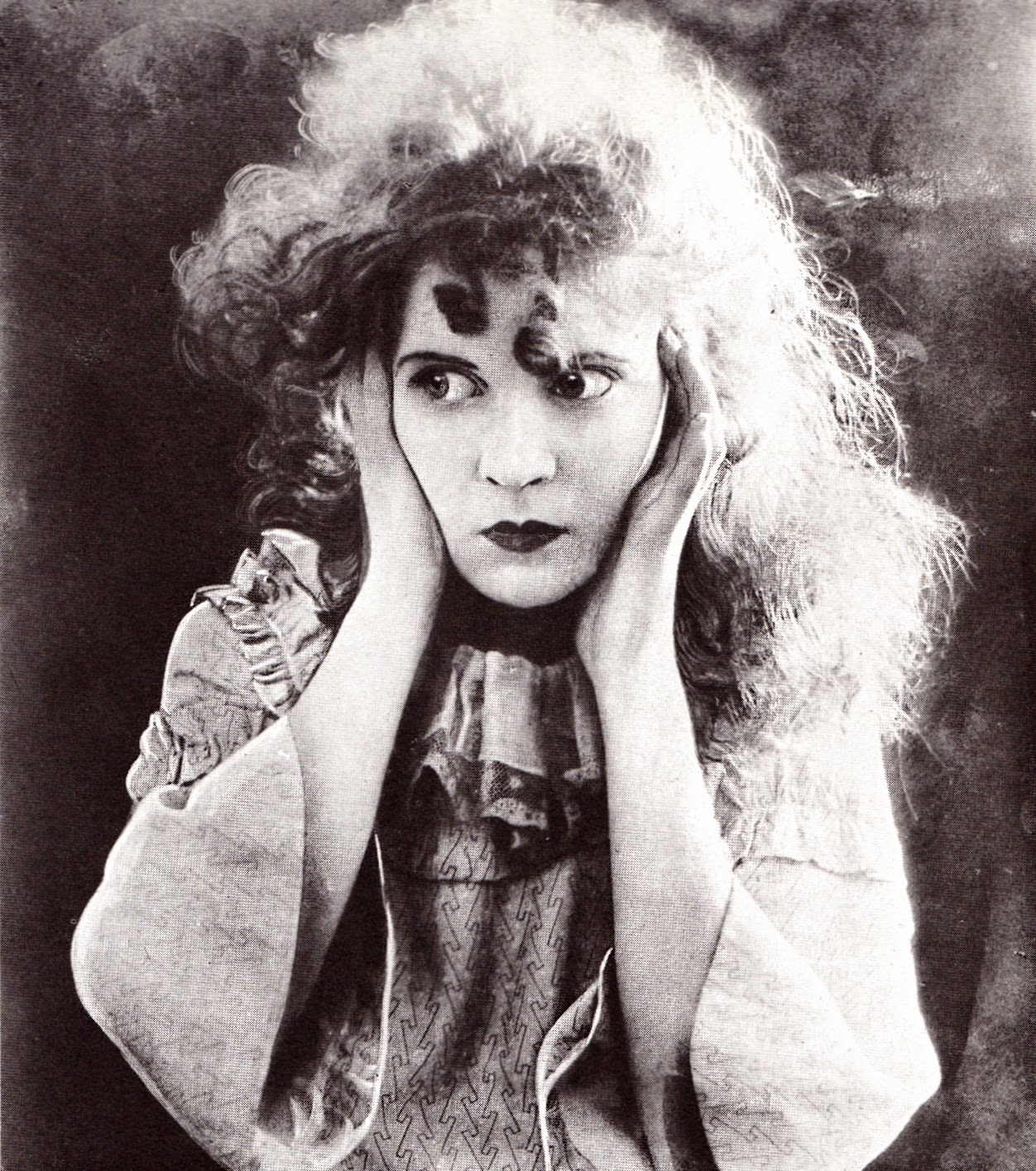 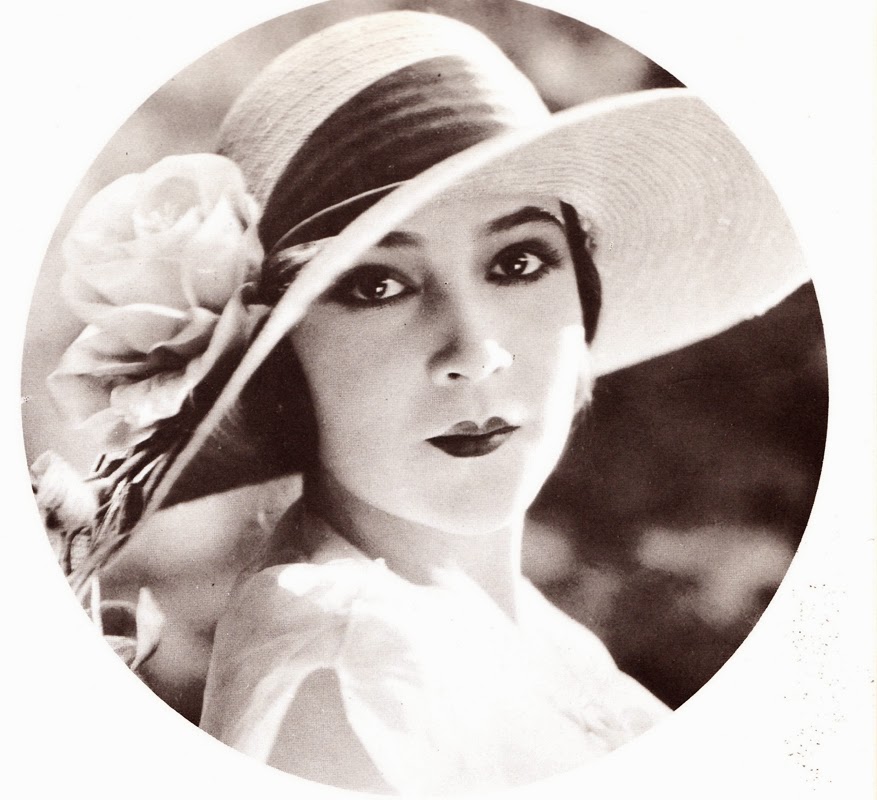 A different style of beauty, of course - and they all had those "bee-stung" lips, carefully made up, bowed and tiny, so unlike the blown-up blubber-lips of the collagen-injected stars (or is it fat from their butts?) that it's downright refreshing. But you sure would not be able to eat or drink. 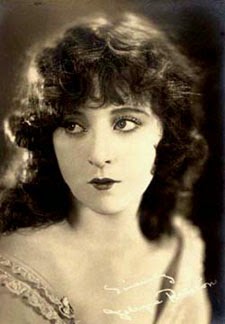 I also notice just now that Del Rio resembles Jobyna Ralson, one of Harold Lloyd's leading ladies (though I wasn't even going to mention Harold - we're divorced now, did you know that?) 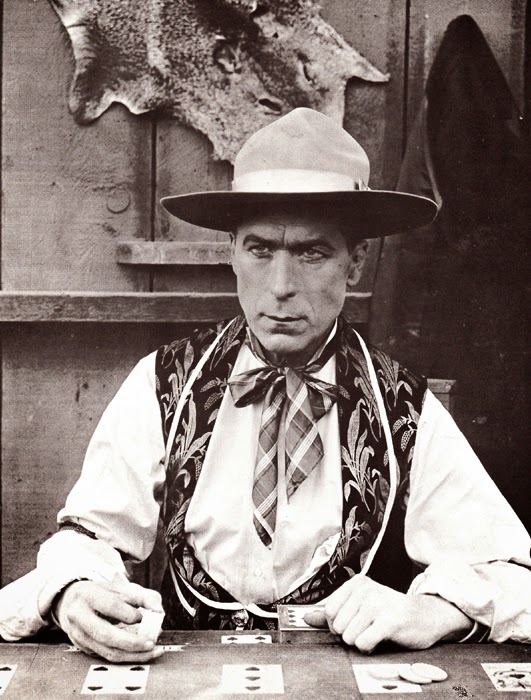 This is a beautiful photo of early cowboy star William S. Hart, whose Westerns may have been the most realistic ever made. My Dad loved to do facial impressions of him, pulling his face down into a stony expression. 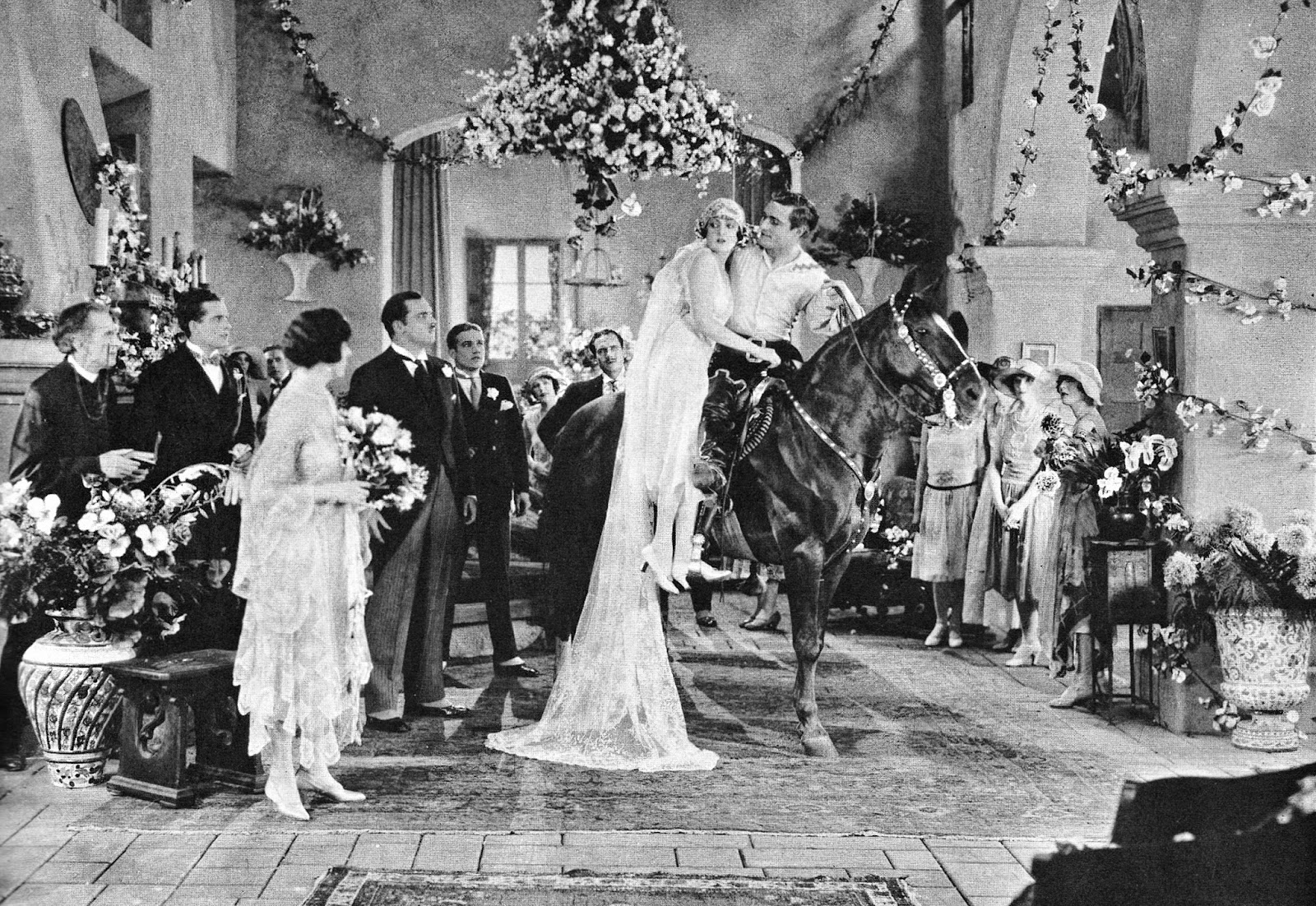 Tom Mix's wedding ceremony, on horseback. Mix ws the Roy Rogers of early cinema, slick and glamorous. His movies were as addictive as those old Zane Grey novels I used to read. 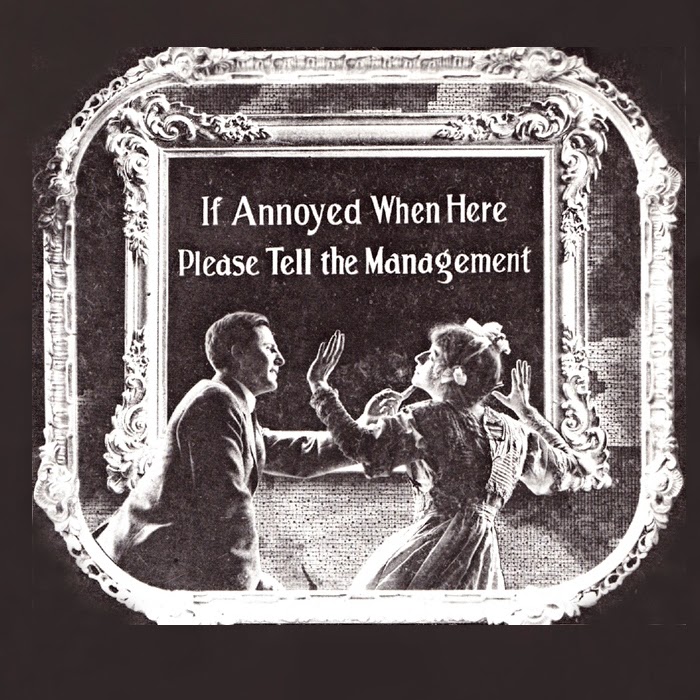 One of those old theatre signs, similar to "Ladies, Please Remove Your Hats" (with a picture of a man climbing a ladder behind the offending hat) or, even better, "If You Expect to Rate as a Gentleman, You Will Not Expectorate on the Floor." As for being annoyed at the theatre, let's bring those signs back, shall we? 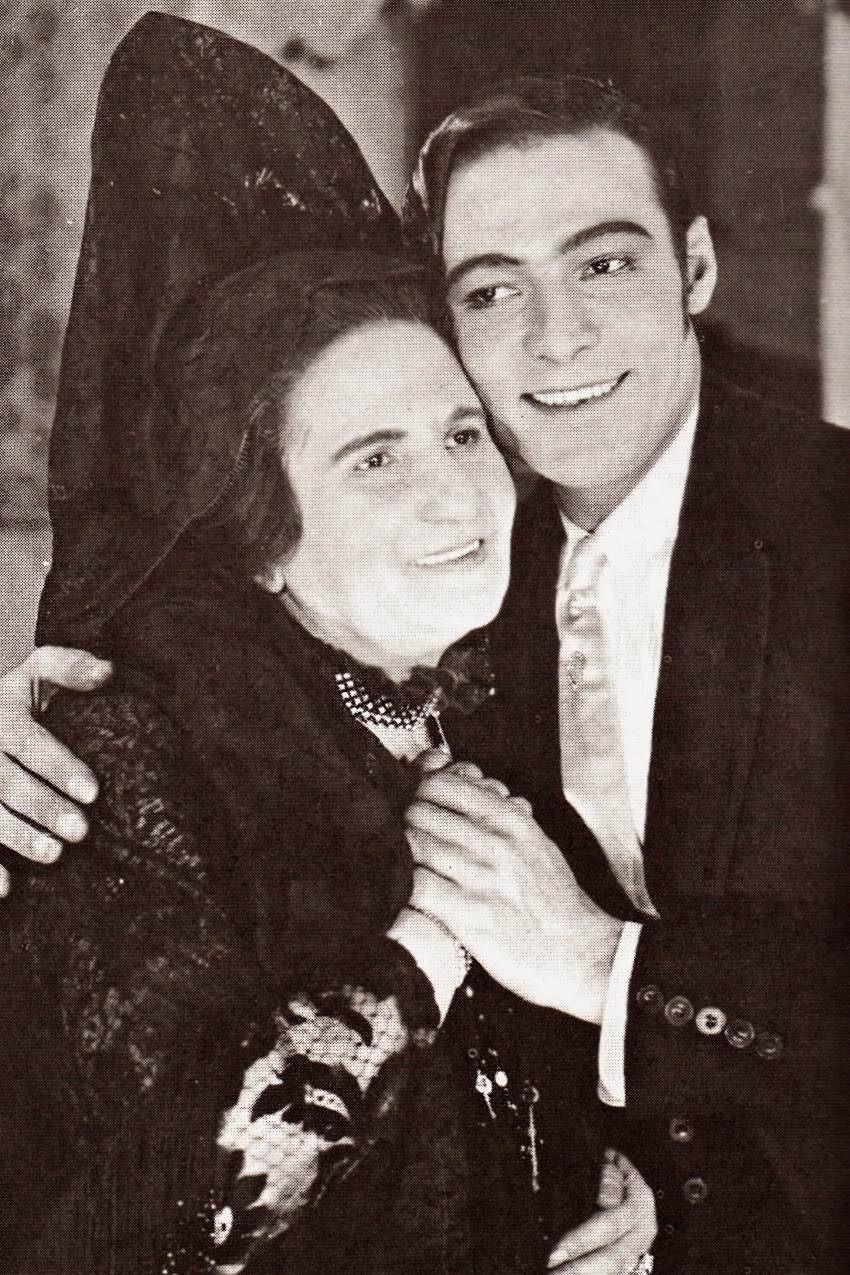 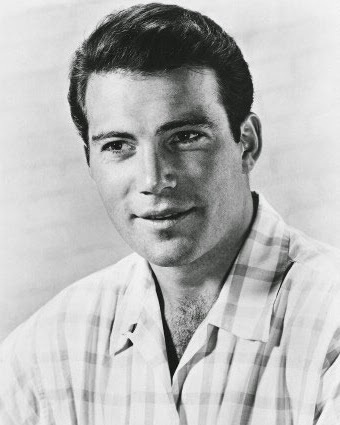 This was startling. One of my first silent movie obsessions, back when I was a kid I mean, was Rudolph Valentino. Can't tell you why. I decided not to include Sheik pictures because there are approximately one billion of them on Google images. But this quaint shot is sweet, and brings me to one of my Separated at Birth thingies: to me, he looks quite a lot like a very young version of a well-known leading man.

There are lots of other shots, but I'm too tired to dig them up.

Posted by Margaret Gunning at 1:00 PM No comments: