Dear sir or madam, will you read my book

Posted by Margaret Gunning at 5:08 PM No comments:

Sometimes the ridiculous is sublime


I think a blog has to have, if not a subject, then certain core subjects that are visited again and again. Since I can't draw worth a tinker's dam (and that's dam, folks - look it up), I live vicariously through the efforts of others.

Here we have an example of early Disney, well before Mickey came on the scene and stole the show. I never liked Mickey Mouse: too bland, too ordinary, even though it could be argued that he was the Harold Lloyd of animation, just a regular mouse. Disney experimented with all sorts of strange things, including a series of Laugh-O-Grams, combinations of live-action and animation which were so bizarre that they almost worked. The star of these was a little girl named Alice, with Pickfordesque corkscrew curls.

It's interesting to see the evolution of Disney from a run-of-the-mill animator with an uninteresting character (Oswald the Rabbit) to the so-called king of animation. It's kind of fashionable to diss Disney now, maybe because of what happened with his empire, the way it evolved into a mega-corp which often seems to lack heart. But the animation goes on, including the mega-blockbuster Frozen which FINALLY provided some strong, interesting female lead characters.

I'm fascinated with the early jumpy, smudgy, quivering, flickering images, post-Gertie the Dinosaur who was supposedly the first real cartoon. I'm fascinated with Fleischer and his surreal clown Koko jumping out of the inkwell. I like the early, gritty Popeye cartoons with their gorgeous rotographic/ stereo-optical backgrounds, which my grandchildren are now fascinated with. They want me to sing that weird skeetin-scattin' Popeye song, which I can't.

(Just look at this, from 1934! A very early Popeye cartoon called King of the Mardi Gras. The background was actually built by hand and mounted on a turntable, then slowly revolved and filmed. Somehow or other the animation was layered on top of it. Who needs 3D?)

I don't know if all this goes back to my childhood, when I sat on the floor (I was probably just a toddler then) and watched the Mickey Mouse Club, which came on every day and padded the live-action clubhouse segments with Spin and Marty episodes and VERY old Disney cartoons. I sat there drooling down the front of my bib and absorbed it all. It was a little bit scary, and it still is, primitive, with a spooky magical energy. Pen-and-ink drawings come to life.

Now we have YouTube, with just about every cartoon ever made, and I drown in it sometimes. My husband growls at me to get out of my office and enjoy the day. And I should.

(Note my radically new ad campaign. I doubt if it will work any better than the old one, which I am not discarding. But at least *I* had fun with it, or some of it. Took me most of the day, in fact. Damn. When I get to the end of it all,  I guess I'll say, . . "Too late.")

Posted by Margaret Gunning at 2:13 PM No comments: 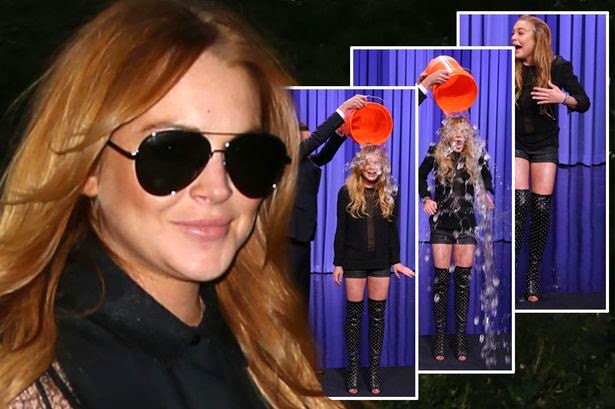 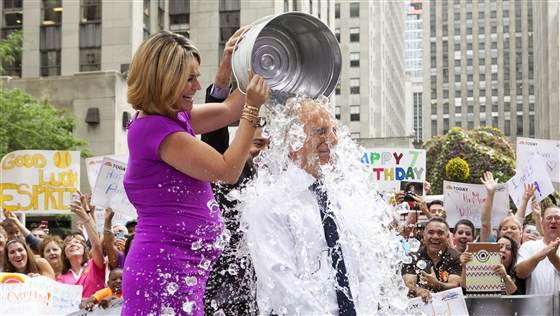 The ALS Ice Bucket Challenge is bad for you.

I don’t mean you will catch a cold (you won’t), or look like a craven sheep (you will). I mean that when you are inspired by a viral fad to donate your limited dollars to a charitable cause, you ignore the diseases that genuinely threaten.

As a result, the ALS Association has received more than $70 million so far, compared to only $2.5 million during last year’s campaign. It is a great way to raise money — but it is a horrible reason to donate it.

We, as individuals and as a society, have finite resources to donate to medical research and other worthy causes. When we decide where to spend our charitable dollars, we need to consider three factors.

1. Where is the greatest need?
2. Where will my dollars have the greatest influence?
3. What is the most urgent problem?

The ALS challenge fails all three of these tests.

First, ALS research is not an especially great need in public health. It is classified as a rare disease and, thankfully, only about 600 people die from it every year in . That sounds like a lot, but that is not even close to the top 20 most fatal diseases according to StatsCan (the top three being cancer, at 72,000 deaths per year; heart disease, at 47,000; and cerebrovascular disease, 13,000). 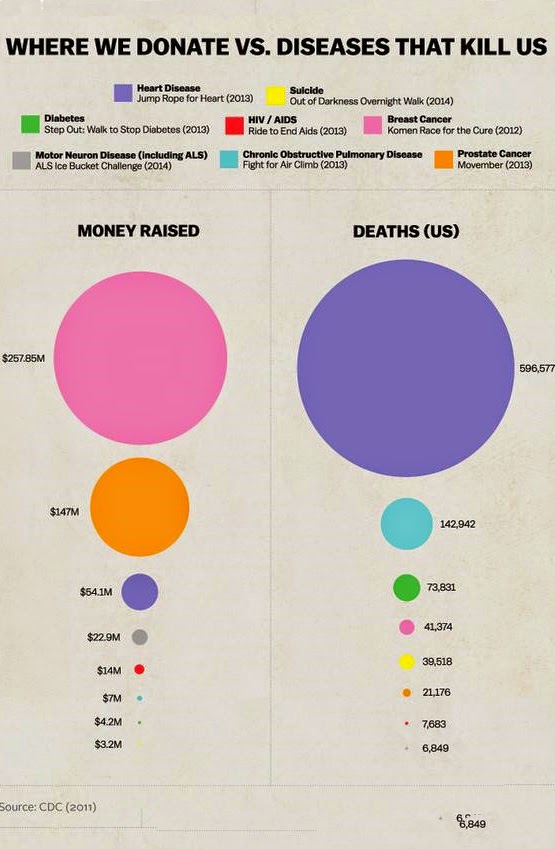 Second, it is already extremely well funded. As this chart from CDC data shows, last year ALS killed 6,849 people in the , and attracted $23 million for research (a ratio of $3,382 per death). Heart disease, by contrast, killed 596,577 but only raised $54 million (a paltry sum of $90 per death). If you want your donation to make the biggest difference, fund the diseases that need the most money.

Finally, ALS research is not an urgent need. If you want to help where time is of the essence, then look to Syria (greatest international refugee crisis in a generation), Ebola(now a full blown global health emergency), or the Central Africa Republic (quietly bleeding to death unnoticed by the world).

We aren’t rational, though. Typically, you will spend more time considering where to order a pizza and what to put on it, than you will deciding where to donate your charitable dollars. As a result, the real threats, the diseases that are far more likely to kill you and your loved ones are ignored. This is why the ALS Ice Bucket Challenge is bad for you, and me, and all of us. Instead of supporting what is most needed, we support what is most amusing.

But you can change this. Print the simple reminder below, fold it up, put it in your wallet. And the next time you reach for your credit card number, pause and actually think.

Scott Gilmore is a former diplomat and the founder of Building Markets.

Readers reply: Follow this link to a selection of their feedback. 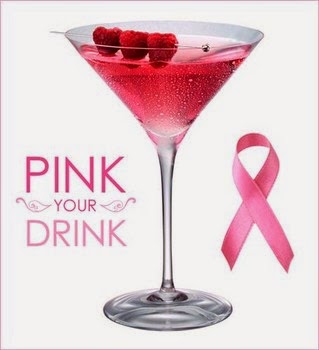 My thoughts. I love this piece and wish I had had the chops to write and publish it. I simply couldn't put my feelings into words. I was not allowed to say anything to people about this, unless I wanted a shocked sideways glance ("Huh?", meaning "I can't believe what I'm hearing"), a headshake ("I knew you were pretty negative, but about THIS?"), or a sense people were embarrassed for me. What a party-pooper! Such a great cause! All that money! Hey, it's just water - what are you griping about? Some people hate everything.

As with breast cancer, donation is lopsided because of public perception and a bandwagon approach. The pink ribbon juggernaut has already taken much-needed dollars away from the number one killer of both men and women: HEART DISEASE. Do you hear of heart disease runs or tshirts or any of that? It's just not a sexy disease. ALS isn't either, so I am surprised that this even got started, and I don't know how it caught fire the way it did, but I am almost certain the roots are in celebrity. If you're famous, you're the lead goose in the flock. This includes brain-damaged idiots like Miley Cyrus and her goddamn ass-shaking and disgusting tongue. 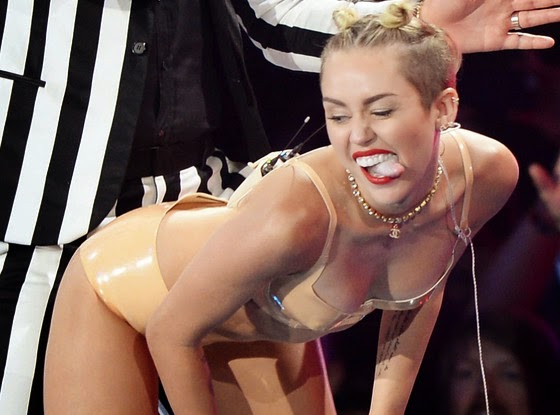 What I'm trying to say is. . . oh never mind, it will never happen because too many people don't THINK. I know from being on Facebook that most people don't, would rather not, but the thing that scares me most is that they don't even know they aren't thinking. If they did, I doubt that they would care. Just jump on the bandwagon, because it's fun! Meantime, whatever funds you may have set aside for charity are spent for the year - but never mind, if it's making all these millions, if so much attention is being paid, ALS must be our most pressing health problem, right?

Excuse me. I'm going to go have a heart attack.

Posted by Margaret Gunning at 12:50 AM No comments: