IT'S A LIE!: The plump juicy raisin scam 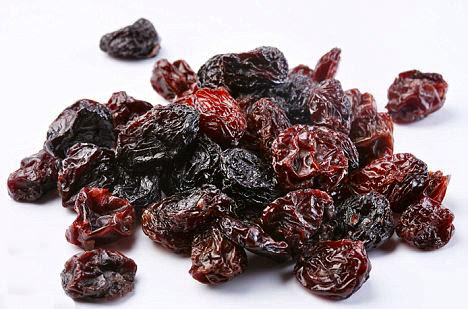 I've already spent too long at the computer, and have "keyboard finger", in which my arthritically-swollen right ring finger twinges like a toothache every time I hit a key. This finger has such a major swelling in the knuckle - the one nearest the nail - that it pushes the end of my finger inward, almost sideways. It's permanent, i. e. nothing that will ever go down. And all my other fingers are following suit.

But in spite of that, I have something I've wanted to say for a long time, and now I must say it. 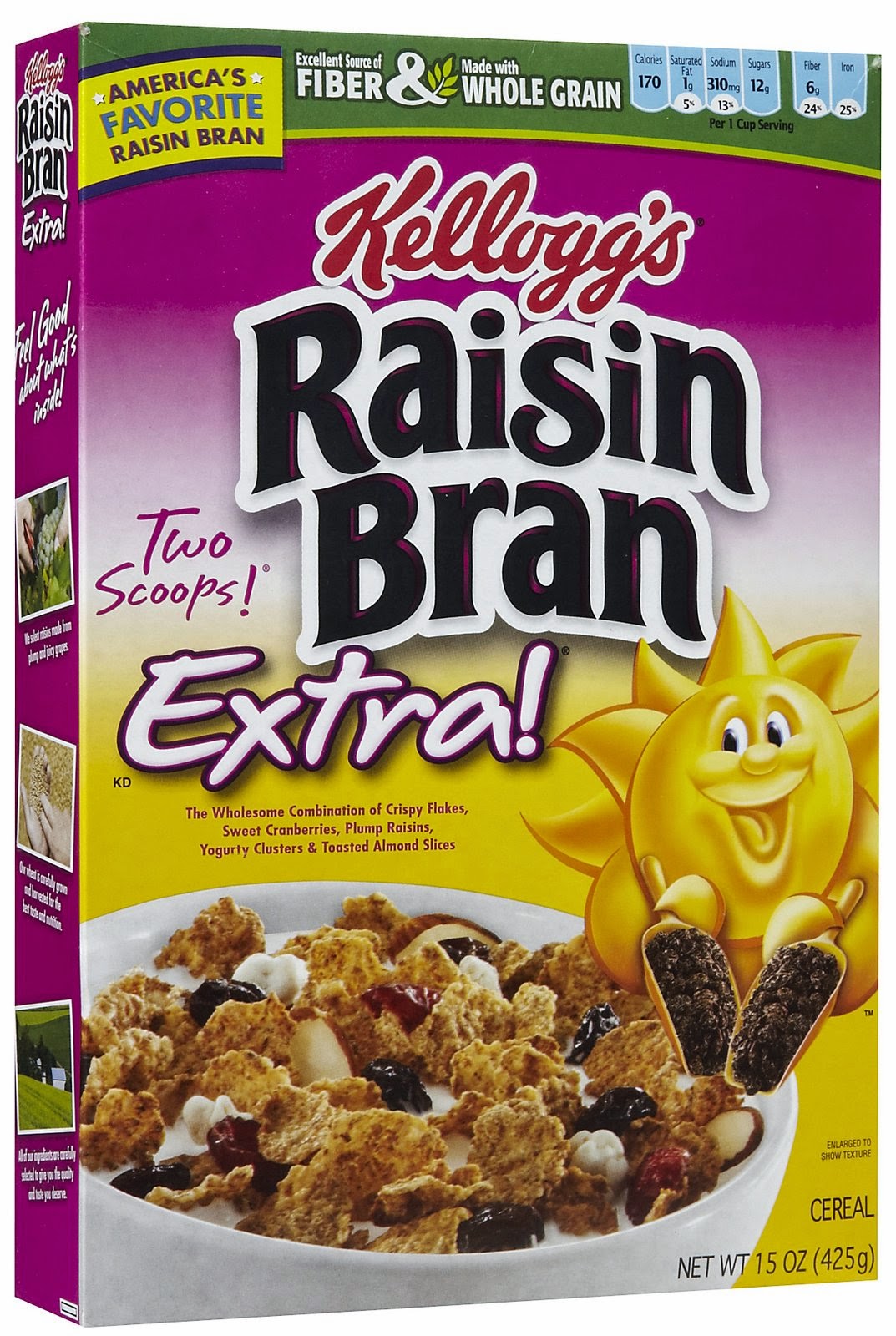 You know Kellogg's Raisin Bran with their cute little ads? For years now, they've been talking about "plump juicy raisins", and no one is saying a thing about it! I can't even find a rant on Google. In fact, if I go on Images, I get mostly decorative pictures of raisins in bowls, presumably looking Plump and Juicy.

SINCE WHEN IS A RAISIN PLUMP?? They are brown, sometimes even black, deeply wrinkled (worse than pruny, since the new pitted prunes are more flat than wrinkled), and dessicated-looking. That brings me to JUICY. Try to extricate an atom of juice from a raisin. Just try it! 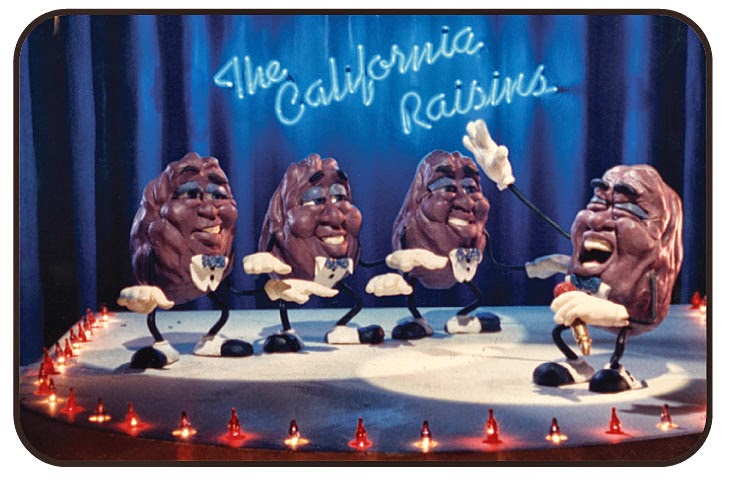 California Raisins - In 1987, the advertising world was taken by surprise with the popularity of a group of animated singing raisins who pushed the goodness of sweet, juicy California raisins.

And yet, here is a snippet of the copy describing the nightmarish California Raisins. And yes, there's that word again: JUICY. A juicy raisin!

Doesn't anybody THINK any more?

Why does everyone accept this "plump, juicy raisins" crap without question? The same reason they accept a lot of other things. Huh? Duhhh? WHY aren't they plump and juicy? They're raisins, aren't they? 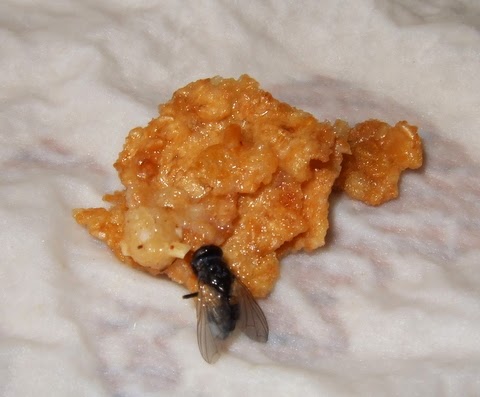 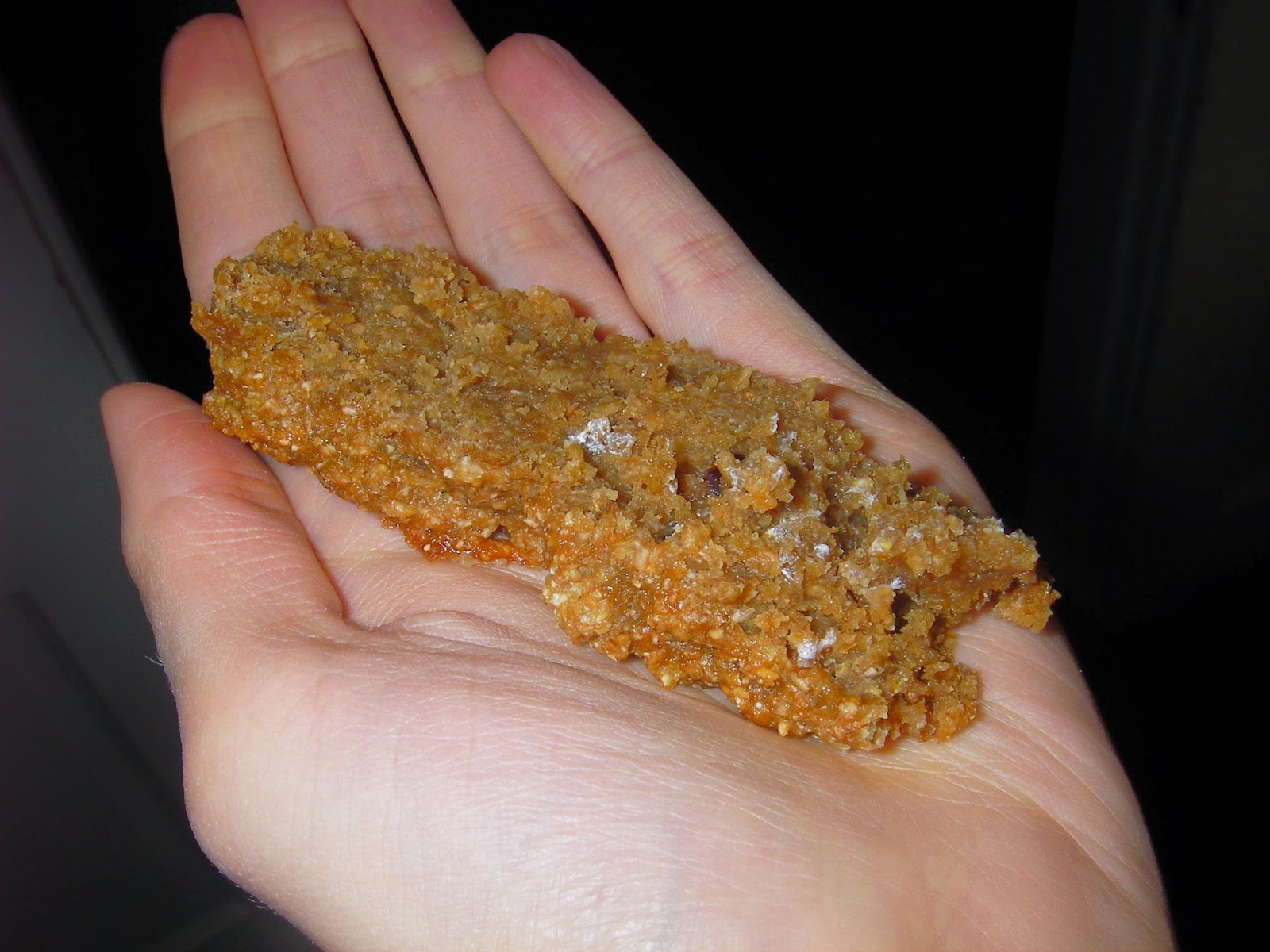 I hate Raisin Bran and their goddamn ads, their "the rai-sunniest brand under the sun!', implying, nay, ADMITTING  these things have been baking under the scorching sun in Fresno. Baking until they are dessicated, meaning DRY, NOT JUICY. "Plump" is even more mind-boggling, like saying Kate Moss is plump. Another ad had something like, "Plump goes east, Juicy goes west. . . " 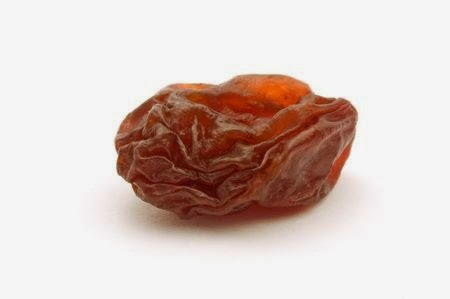 These things, hard, dry, wrinkled, brown or black, often with teeth-jarring unpleasant grit in them that you can't get rid of, are meant to be a (heavily sugar-coated) chewy relief from the crumbly disaster that is bran flakes. We have a problem with bran flakes, All-Bran, bran muffins,and all other bran-containing products. We all know what they are designed to do, and not only that, THEY LOOK THE SAME WAY GOING IN AS THEY DO COMING OUT. They look pre-digested, processed, and spewed out. 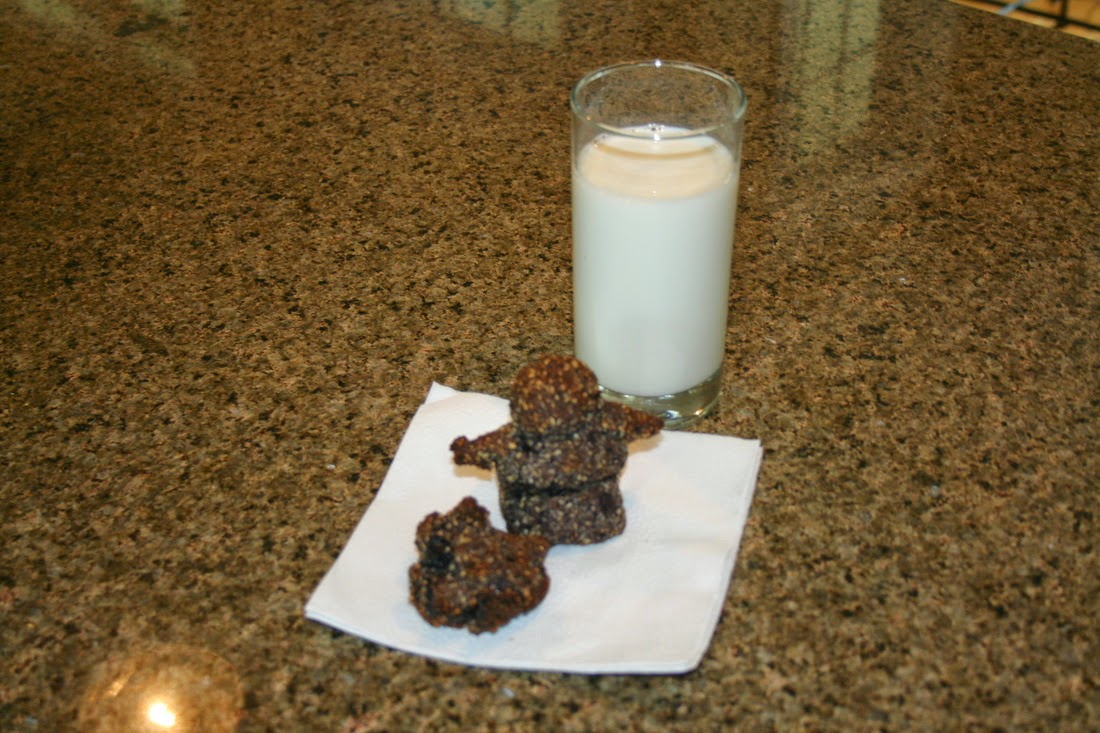 Bran muffins might as well be meadow muffins, as far as I am concerned. They look like something a cowboy would fnd along the trail. The only thing in this world more turd-like is the prune, and NO ONE talks about "plump, juicy" prunes, do they? That is because they are a DRIED fruit, not a FRESH fruit. A DRIED fruit has almost all of its moisture removed, which is why it wrinkles up like that! 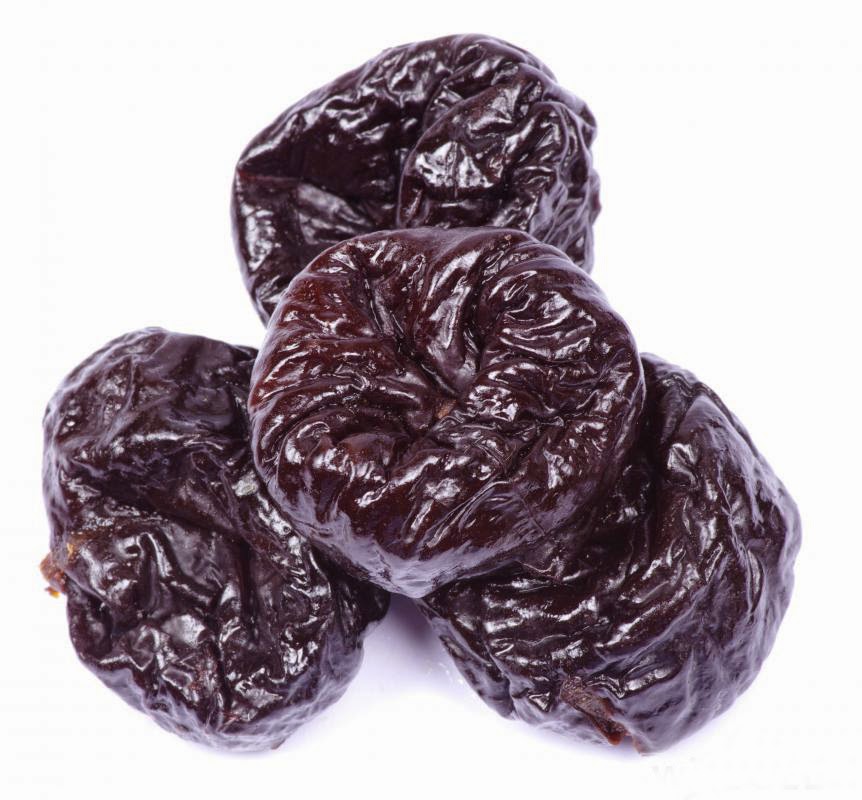 Someone should slap the Kellogg's ad executives upside the head, but no one will, because by now, the public seems to AGREE that raisins are "plump" and "juicy". Most of the Google images I found, depicting dry, wrinkly, dessicated raisins, were under the heading "plump and juicy!". Big Brother (or should I say Big Bran) has triumphed once again.

Full marks if you can guess where this came from. I stumbled upon it during my late-night gif-image crawl. Looked like it might lend itself to some experimentation.

I don't have the capacity to do too much here. In fact, it's rare I that see any gifs that have real technical merit, and most are only one or two jerky seconds. (Ahem.) This is the slow-mo version, making me wonder if the animator somehow transferred actual writing to the screen. Well, they must have! I know almost nothing about animation and have to limit myself to 15 seconds max.

This backwards version is also interesting, as the title eats itself. It seems a bit jerky, and faster than you would think at "slow" speed, but it's probably only registering a few frames per second.

All right, this is the last one, at "normal" speed, but it plays very fast. Reminds me of someone sucking up a wet piece of spaghetti.

For some reason I love these. They remind me of the old "fill-ums" we saw in the basement of McKeough School in Chatham, Ontario when I was in Grade 3. These "fill-ums", though paralytically dull (hygiene, geography, National Film Board stuff) were a nice break from classes that were even more paralytically dull.

I like this, too, a sort of reverse countdown. Countdowns remind me of the astronauts, of course. Gus Grissom and the like. There are a lot of phony countdown headers on YouTube, and you can tell they are phony because they go down to 1, which a real header NEVER does (don't know why). This is from some Paramount thing, and once I slow it down you will be able to see the details.

I think I see "SMPTE UNIVERSAL LEADER" before the countdown. The top one is the hardest, because the brain will more quickly recognize a real word and its meaning. I have no idea what the captions mean, some sort of arcane code. Is it a real header or "leader"? Is it really from Universal Studios, or does this mean it's a sort of generic leader? Now that I look at it again, yes, I think so, though SMPTE makes no sense at all.

There is a reason why it was effortless for me to memorize High Flight for school. I already knew it. Anyone who had ever stayed up past 11:00 p.m. knew it. For reasons which are now completely incomprehensible, many TV channels used it as a signoff before the long "boooooooooop" that ran all night and used to scare the hell out of me. Most things scared the hell out of me then.

There were a couple of other things about the intro that scared me. The way Clark Kent morphed into Superman was scary. In this case it's reversed and in slo-mo, so it appears that Superman is morphing into Clark Kent (who, as we all know, was partially inspired by Harold Lloyd. Though how anyone can be "partially inspired" is anyone's guess.)

I was maybe three or four, five tops, when this show would come on, and it was already in syndication. My brother had a Superman costume that he'd put on, and he would lie along the back of the sofa and go "Pssssshhhhhhhhhhhh!" I didn't know it was an American flag flapping behind Superman, in fact I didn't know what the hell it was. The announcer, who turned out to be Bill Kennedy, a B-picture actor and host of a long-running Detroit movie program, had a note of hysteria in his voice that just mounted: "Superman. SU-perman. YES, it's SUUU-per-mannnnn!" Last night when I played the clip over and over again,  looking at the menacing flag flapping around, I was reminded of Nazi Germany: "Is vee not zee Super Race? Super Duper Super Race!"

I think this housewife has had too much coffee. This was a demo of the new television technology: the remote control! It had a cord on it, which is carefully hidden beneath her wrist. I converted a faded color print into b & w for effect, though the announcer, who had the strongest Bronx accent I have ever heard, kept talking about "culluh teck-NAHHH-la-gee".

Very early Disney, in which Walt himself does Mickey's voice. This was so freaky, I had to see what it looked like slowed down.

(Special Bonus gif. You thought there wouldn't be a Special Bonus Gif? There are literally thousands of snippets on YouTube of completely unknown provenance. I mean: where do people GET all this stuff, old ads, old TV shows and cartoons, and even TV station signoffs from 70 years ago? This one is for WABD, New York's Window on the W(blkphtdbt).  WABD was on the Dumont Television Network, which for some reason reminds me of Milton Berle, whom I never liked. I was two months old at the time. Dumont bit the dust a long time ago, and back in the 1940s its logo was mighty strange, quavering and flashing, with Lady Liberty's torch cut off at the top. No one called it TV then, and it was common to refer to viewing as "looking at television".)