Sex for a buck? 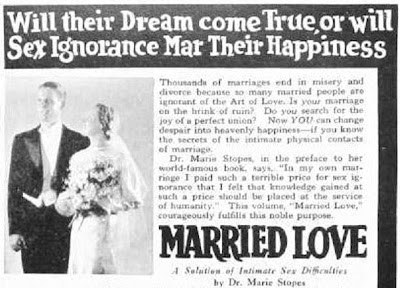 This-here vintage ad for a marriage manual, a classic of enlightenment and orgasmic edification, is going to require a little translation. I PROMISE you I am not adding anything or taking anything away, though deciphering the bleary grey letters may prove to be a challenge.


Will Their Dream Come True, or will Sex Ignorance Mar their Happiness
﻿
Thousands of marriages end in misery and divorce because so many married people are ignorant of the Art of Love. Is your marriage on the brink of ruin? Do you search for the joy of a perfect union? Now YOU can change despair into heavenly happiness -
﻿
if you know the secrets of  the intimate physical contacts of marriage.

Dr. Marie Stopes, in the preface to her world-famous book, said, "In my own marriage I paid such a terrible price for sex ignorance that I felt that knowledge gained at such a price should be placed at the service of humanity." This volume, "Married Love", courageously fulfills this noble purpose.

Editor's note. I didn't think they were even going to use the word "sex", what with all those references to the Art of Love, "perfect union" and "intimate physical contacts". This Marie Stopes is painted as a sort of Albert Schweitzer or Madame Curie of the fuck-book set, selflessly sharing all the hot gyrations she learned (somewhere, certainly not in her marriage) with mankind.
The thing is, these books use such remote, stilted, even clinical language that it's hard to even fit it together with the sweaty realities of sexuality, the squeezes and groans, the slippery. . . oh never mind, let's go on.

Partial Contents
The practice of restraint to please the wife.
Surest way to prepare wife for union.
The marital rights of the husband.
What the wife must do to bring her husband's physical desires
in harmony with her own.
Regulation of physical marital relations.
Sleeplessness from unsatisfied desires.
Nervousness due to unsatisfied desires.
Charts showing periodicity of natural desire in women.
The essential factors for the act of union.
Greatest physical delights in marital union.
How some women drive their husbands to prostitutes.
Natural desire for physical union.
Joys of the honeymoon.
Ignorance of the bride and unwise actions of the groom.
The man who has relations with prostitutes before marriage.
Causes for unhappiness in marriage.
Frequency of marital relations.
Stimulation of physical desires.
The problem of the strong-sexed husband and the
weak-sexed wife.
Positions.
Physical relations during pregnancy.
Problems of childless unions.

All this makes me long to get my hands on a copy of this thing, but I am sure it has gone out of print by now. Also, this looks suspiciously like one of those ads in the back of a comic book. Good grief, imagine exposing our innocent youth to such a thing! "Joys of the Honeymoon"? What sort of filth is this? And prostitutes are mentioned not once, but twice. When you think about it, however, if virginity is assumed for both "bride" and "groom", then who the hell is going to know anything about this at all? It will be like the poor bloke who kept shoving himself into his wife's belly button and wondering why he couldn't get her pregnant. 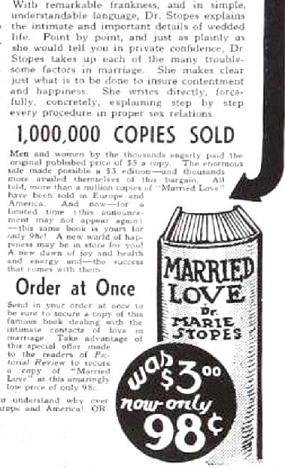 With remarkable frankness, and in simple, understandable language, Dr. Stopes explains the intimate and important details of wedded life. Point by point, and just as plainly as she would tell you in private confidence, Dr. Stopes takes up each of the many troublesome factors in marriage. She makes clear just what is to be done to insure contentment and happiness. She writes directly, forcefully, concretely, explaining step by step every procedure in proper sex relations.

This whole thing reminds me of that old vaudeville routine, "Niagara Falls! Slowly I turn. Step by step. . . inch by inch. . . " Though this may sound like instructions for building a birdhouse, it's actually a guide to ecstasy and spasmodic, flailing pleasure for both Bride and Groom. It's just that they had to use this sort of clunky, unsexy language to leach out every trace of erotic content. "Point by point", "step by step",  "directly, forcefully, concretely": this sounds like something from some sort of 1950s home repair manual. But my favorite is the last line: "explaining step by step every procedure in proper sex relations." If these proper procedures had been followed to the letter, the whole human race would have died off by now.

Can't read this worth a darn, but it seems to be saying there was some sort of "ban" on this obviously filthy, salacious material and that now it has been lifted. Could this be a ploy to get people interested in this smut? The federal judge, who looks like Andy Hardy's dad, is obviously reading the back cover with great interest. I am also intrigued that to get this book, you have to send your 98 cents to the American Biological Society on East 34th Street in New York. I wonder what it looked like.

(P. S. That picture of the book - at least I think it's the book - the spine of it, I mean - at first I thought it was a spray can - then I wondered what would be IN that can. This was long before the days of Reddi-Whip.)