Sea-Monkeys: so eager to please


Honest to bloody God, I was going to postpone this 'til tomorrow or just forget all about it, being tired and crampy and out of sorts. But more and more evidence kept piling up. I went from one bizarre manifestation to another. You can still get these things, see - in fact I think a couple of my grandkids experimented with them. Which is what they are - a science experiment, or at least a biology experiment. These little suckers might be interesting to watch under a microscope. My brother similarly kept amoebae and paramecia in his room, feeding them on Brewer's yeast that was the most disgusting-smelling stuff that ever existed. 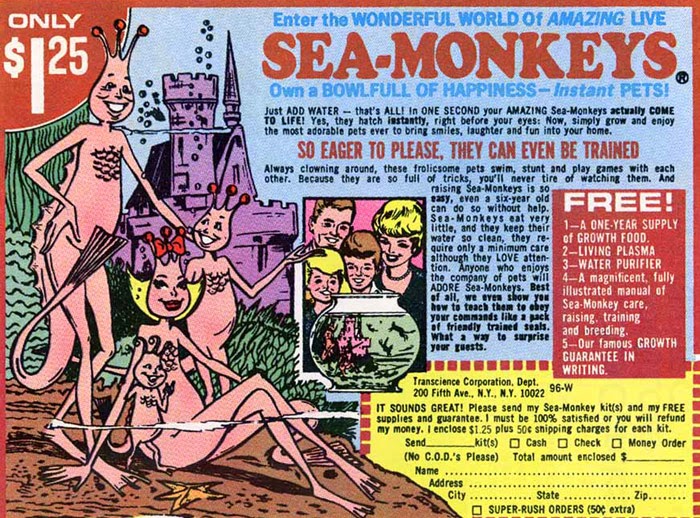 Being a kid of the '60s who read comics a lot (especially Archie, True Romance, Prince Valiant, and the nice fat Jimmy Olsen Annual that we always took to the cottage in the summer), I was aware of these sorts of ads. They looked absolutely brilliant and magical, and of course I never sent away for them. I never sent away for anything. Not Onion Gum. Not the Joy Buzzer. Not X-Ray Specs.The addresses were American and intimidating, and besides, I could never scrape together $1.25. It all went on Pixy Stix, sherbet fountains, Danish troll dolls, Beatles cards, and whatever else obsessed me at the time.. 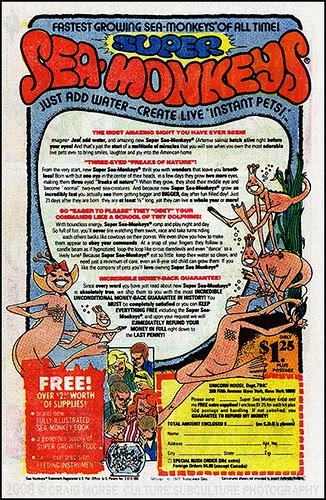 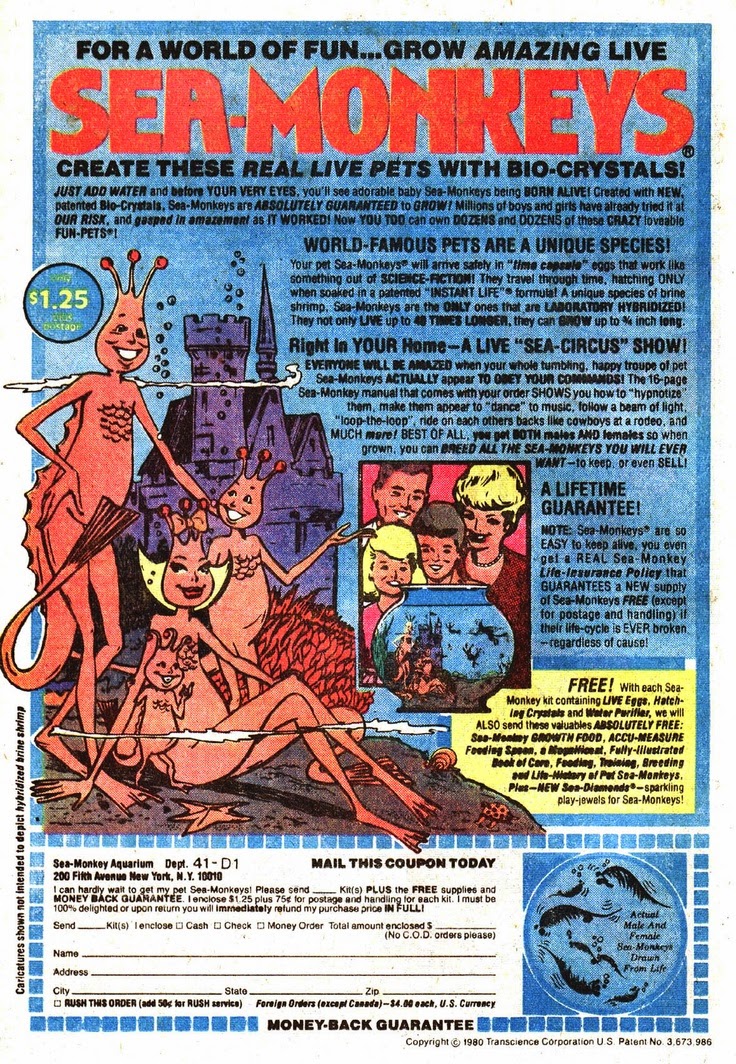 So I knew about these things, I was aware they existed, but it was a long time until I found out what they really were. I didn't see how these plump little creatures could emerge from a seemingly lifeless dry powder, as the ads claimed. Well, they didn't. They didn't lounge around on the patio sipping daiquiris and keeping up with the Sea-Monkey Joneses, either. The truth was far more sinister. 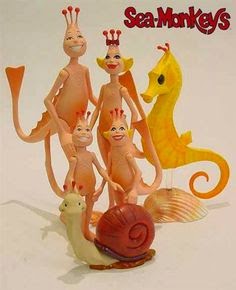 Though there were all sorts of these depictions, usually featuring beaming families with majestic castles in the background, I was suspicious. I was born suspicious, and it has served me better than any other trait I possess. So inevitably, the truth began to leak out. A friend of my brother's DID send away, and boy was he disappointed. Hardly anything hatched out, but what did hatch out was more like this:

It didn't seem to matter, because by then a whole Sea-Monkey Universe had sprung up, with competitive cycling, fox hunts, Olympic diving, swimsuit competitions etc. Whether or not this was fair to the organisms involved was debatable. 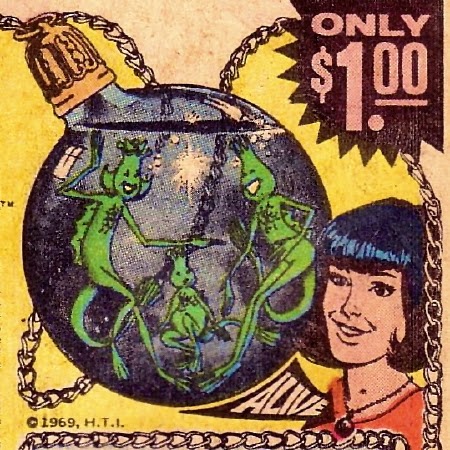 One of the most fascinating bits of Sea-Monkeyana I found was this thing that looks like a Christmas tree ornament. I thought: oh God, please - surely not! It turned out to be a bauble you can wear around your neck. How you get the Sea-Monkeys in there is anybody's guess, unless they hatch out inside it. Your friends would run screaming. 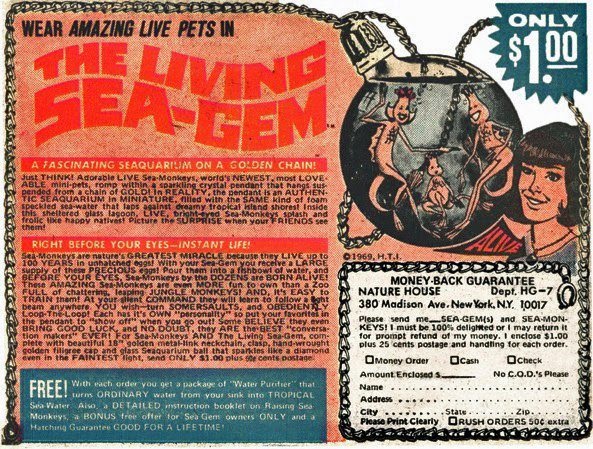 It took a long time for me to find the whole ad, but in my usual bloodhound fashion, I tracked it down. It's hard to read the bleary text, but we don't really have to. Our Sea-Monkey friends, still grinning hilariously, are crammed into this little ampule thing, not seeming to notice that they will soon suffocate. It's puzzling that in the smaller ad the Sea-Monkeys are green, a strange thing because the poses are exactly the same. (In fact, this is the only time I've seen Sea-Monkeys that aren't sickly pink.)

Though the paraphernalia has been somewhat modernized, Sea-Monkeys are just as hokey as ever. There's some sort of wrist capsule you can put them in, subjecting them to the same sort of torture as with that necklace thingie. They have become "cool" on the internet, leading to such bizarre phenomena as the Sea-Monkey Worship site. This has got to be the strangest site I've ever seen, if not the ugliest, but it has bad poetry about Sea-Monkeys in it, so it ain't all bad. Check it out, why don't you: 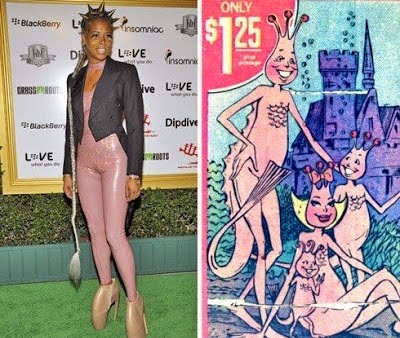 There was an overabundance of  material on this subject, although a few years ago there was hardly any. I found LOTS of pictures of people dressed up like Sea-Monkeys. Most of them were so plug-ugly I didn't include them, but this chick, whoever she is, is rather fetching. For a Sea-Monkey. 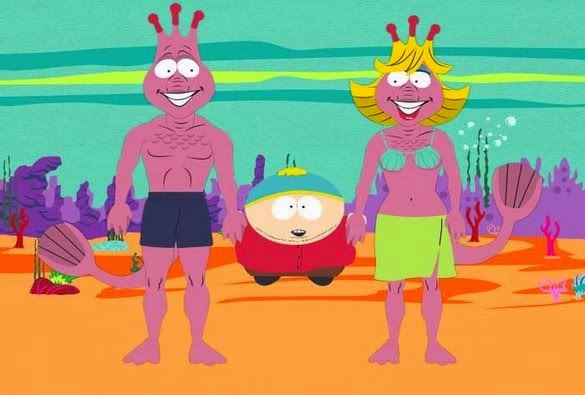 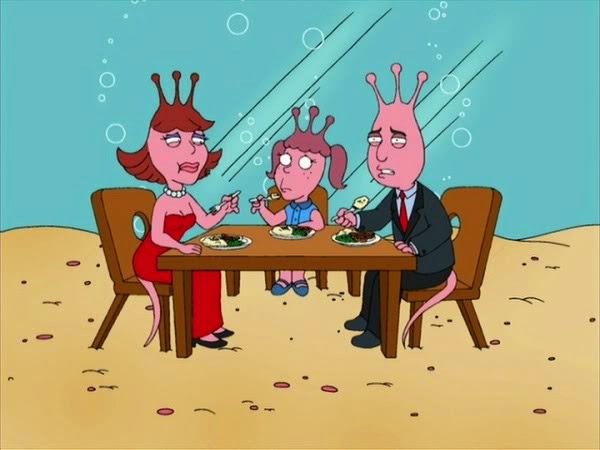 These would appear to be animated Sea-Monkeys from South Park and (I think) The Simpsons, in which the family refuses to behave like the promised Bowlfull of Happiness. Bowlfull of Angst is more like it.

"So eager to please," goes the copy, "they can even be trained." Trained to crash into each other? 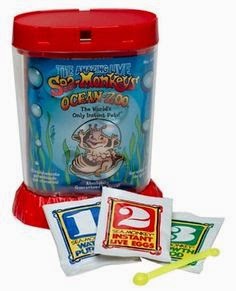 Trying to "train" these, get them to ski or ride bicycles or do any of the other tricks in those ads, is kind of like trying to teach a sperm to walk. These things have about the same mentality. I mean, a sperm knows enough to swim upstream - or swim somewhere (actually, like Sea-Monkeys, I think they just swim randomly), and that's it, that's their whole bag of tricks. Sperm are sort of alive. Aren't they? Good God, of course they are, or there wouldn't be a human race! (Come to that, I wish they WEREN'T such good swimmers, but never mind). So if they're alive, do they have a brain? Do they have a nucleus, even, anything at all that drives them, that makes them "go" in their spermy little way? Ah, uh, probably not. So if the very essence of life, or half of it anyway, has no brain, WHAT SORT OF BRAIN DO THESE LITTLE BUGGERS HAVE? Dick-all! 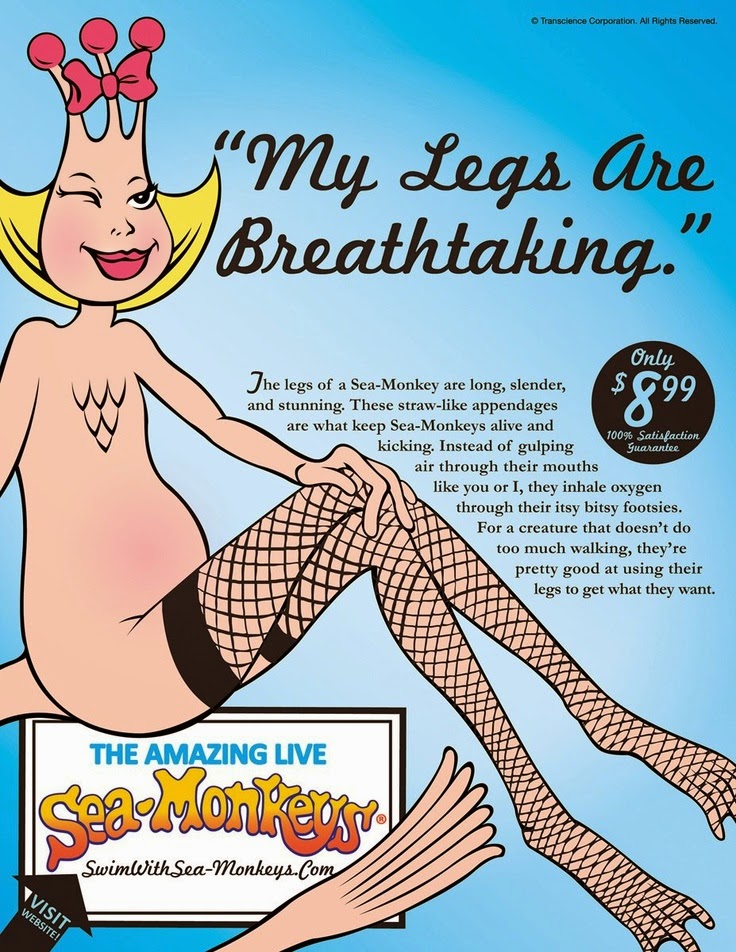 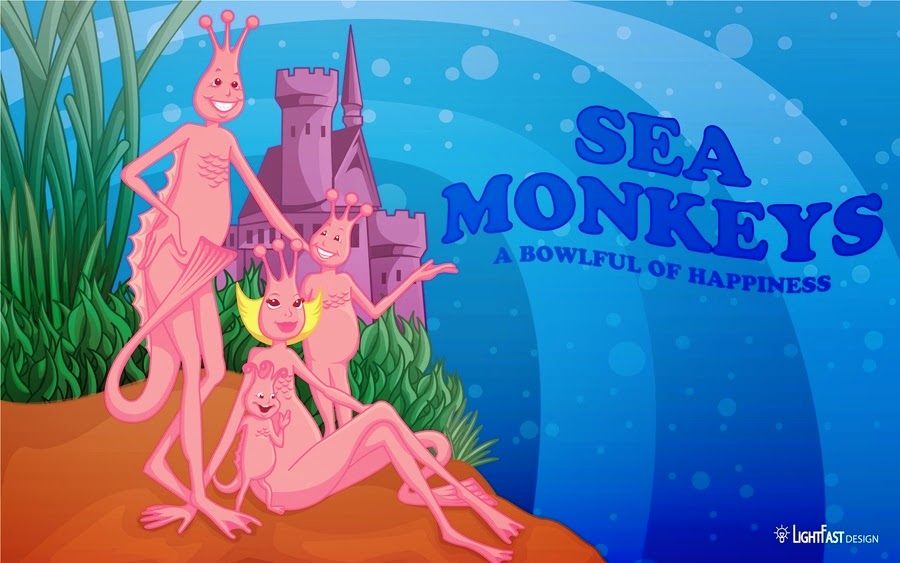 The colors may be gaudier, the ads sexier, and the cost inflated, but a brine shrimp is still a brine shrimp. You might be able to make a mosquito jump through a hoop, but seriously - would you want to try?

Oh No, here comes Rhakeem looking for some gold
Now he has spilled my monkeys, they were only 1 hour old
Now Sasha comes along thinking it some silly game
She turns the tank upside down and makes sea monkey rain
Nancy thinks its a snow globe and she stops by to shake it
I don't know if my poor sea monkeys are ever gonna make it
Please don't touch my monkeys, or spill them anymore
I started out with sixty, now I have only three or four
Stay away from the aquarium if you know what's best
I don't want any more sea monkeys dying in a puddle on my desk

Sea-Monkey gone!
My Sea-Monkeys have simply gone!
Disappeared, forgotten, had the gong.
Oh, look! There in the water see;
One just as happy as can be!
There's another! I'm happy too.
"Now I can live well, just for you!"
"There are two more of your kind,
That I myself have managed to find."
Four! My grief has turned to joy!
"You each will have a different toy."

Written by Jill S. M. Hunter. You can see my stories at the Wall O' Grief

I have a batch of Sea Monks,
I love them so, I do,
they swim around, swim
in circles above their little
green tank, so green, and
I love to watch you, to see
your little bodies swimming,
and to see your eyes, your
tiny little eyes, staring,
staring, staring at me
through the plastic that
is your home, oh how
I love you so,
my strange little pets

roses are red,
sea monkies are not
Submitted by Kali

monkey you are!
oh, how i yearn to be your pal
never leave me, little gal
keep me in your heart and soul
ever swimming in your bowl (tank)
yippiee!

Tally-ho! It's the Sea-Monkey Fox Hunt!

Posted by Margaret Gunning at 7:51 PM No comments:

I wasn't going to write about Robin Williams

I had a thought. Everyone's having thoughts about these things now, because there it is, out in the open. It isn't just his endless need or requirement to be entertaining every second. It was the sheer volume of work, the movies, so many of them classics, back to back to back - WHO could maintain that level of intensity and not crack and drain out the bottom? That last photo of him was horrifying. He stood in the Dairy Queen, his face grey, probably twenty or thirty pounds underweight. There was no expression on his face. The staff in the Dairy Queen did not recognize him. What happened?

No one uses the term "burnout" any more. It's an expression that was popular oh, some time in the '80s, was it? It means - well, I don't need to explain what it means, do I? Frazzled wires, blown fuses, so much energy forced through the system, so far beyond its carrying capacity, that one day the whole thing blows up or melts down.

He was simply done. Or thought he was. The vessel was empty. I remember a line from Bob Dylan: "as you stare into the vacuum of his eyes". He was in the minuses now, so tapped out that you could see through him. He could walk through walls and haunt people before he was even dead.

Several times since the news, I've flipped into a frilly and frizzled state that I recognize all too well, the gaiety of grief, a mini-mania that can actually be quite enjoyable. Except that it isn't, and just under it is an exhaustion so profound that you can't begin to describe it. Times a million, and maybe you've got his plight. No one could do what he did, and then, at the very end, he couldn't either. 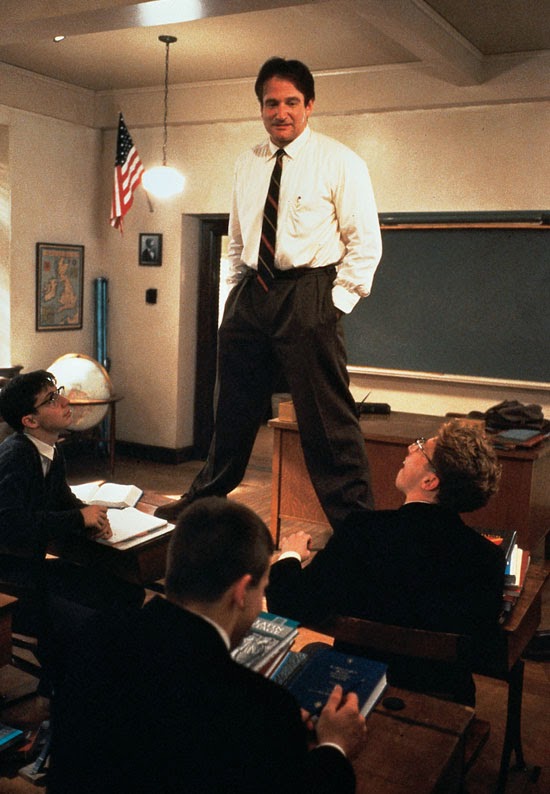 O Captain! My Captain! our fearful trip is done;
The ship has weather'd every rack, the prize we sought is won;
The port is near, the bells I hear, the people all exulting,
While follow eyes the steady keel, the vessel grim and daring:
But O heart! heart! heart!
O the bleeding drops of red,
Where on the deck my Captain lies,
Fallen cold and dead.
O Captain! My Captain! rise up and hear the bells;
Rise up—for you the flag is flung—for you the bugle trills;
For you bouquets and ribbon'd wreaths—for you the shores a-crowding;
For you they call, the swaying mass, their eager faces turning;
Here captain! dear father!
This arm beneath your head;
It is some dream that on the deck,
You've fallen cold and dead.
My Captain does not answer, his lips are pale and still;
My father does not feel my arm, he has no pulse nor will;
The ship is anchor'd safe and sound, its voyage closed and done;
From fearful trip, the victor ship, comes in with object won;
Exult, O shores, and ring, O bells!
But I, with mournful tread,
Walk the deck my captain lies,
Fallen cold and dead. 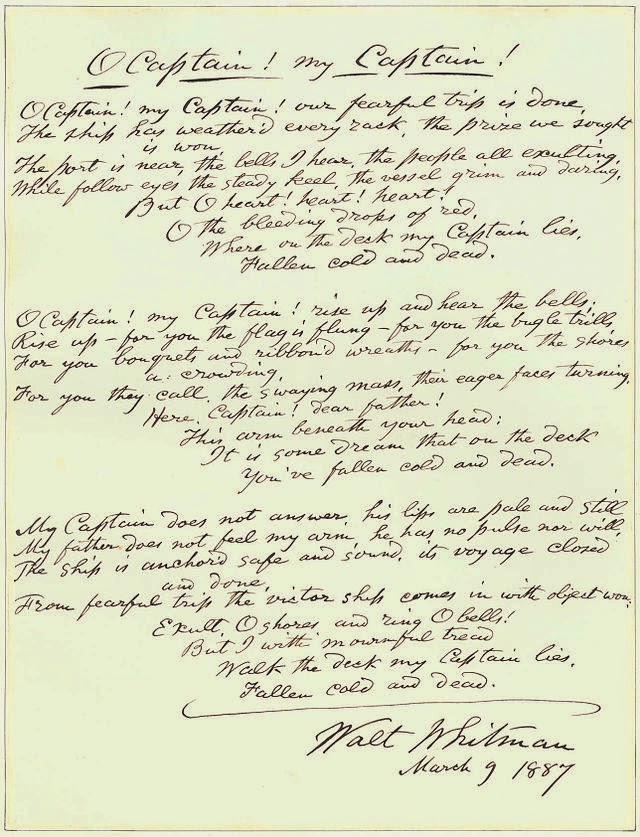 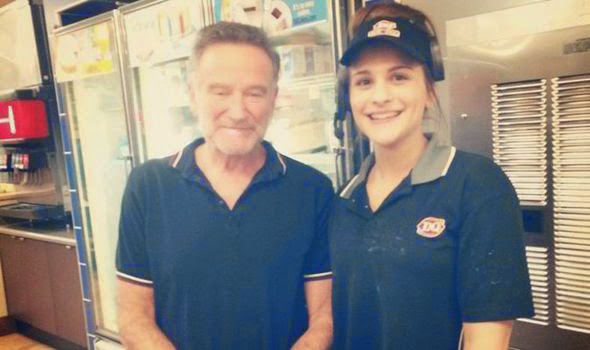 Posted by Margaret Gunning at 3:59 PM No comments: