Hap, hap, happy - it's the Hapsburgs! 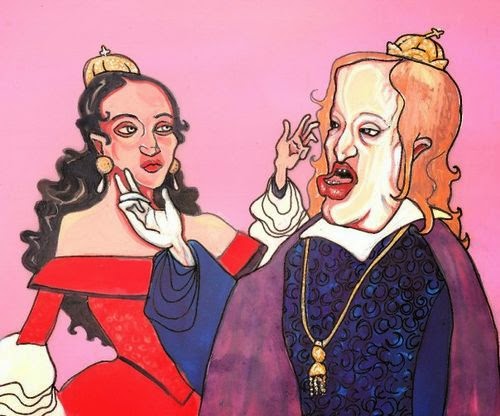 Sometimes you just have a few things left over, you know? And you're not sure what to do with them. Such was the case with my Hapsburg Lip post. Bizarre as the story was, it was about to leap to the next level, the one called "weird or what?" Some of the pictures were a little hard to believe: portraits done by professional artists who were hired to make flattering images, coming up with things that belonged in a freak show. The fact that these people, who all looked alike and had the same deformities, were marrying each other as a matter of course was - well - disturbing.

Here Charles the 2nd of Spain, also called El Corkscrew for his twister-pitcher genes, gets it on with some wench, probably (judging by the lip) a Hapsburg. 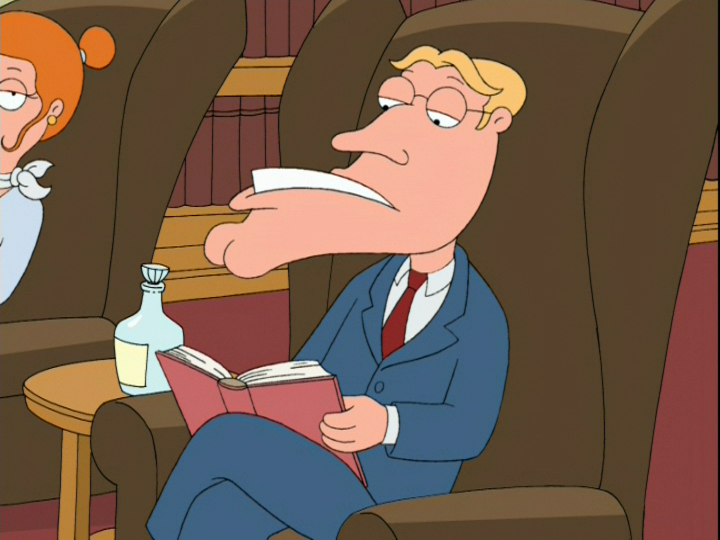 I don't know why, but I found a cartoon character with a vast prognath - prognath - REALLY BIG jaw, and wondered if he might be descended from Hapsburg blood. The problem is, the internet is keeping it hush-hush, as if the incest ramifications are just too creepy and no one will admit to being a descendent. Those Hapsburgs, eh? Still powerful after all these years. 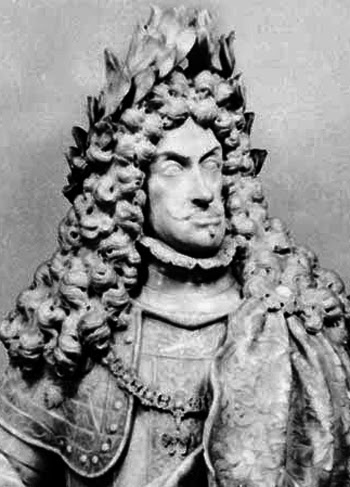 Meantime we keep finding evidence, like this stone guy with a really big, you know. 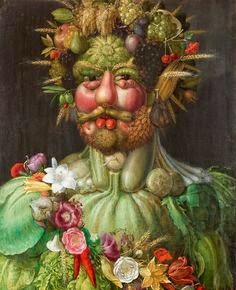 Then there is Salad Guy, who is also said to be a Hapsburg - or are those radishes? You decide. 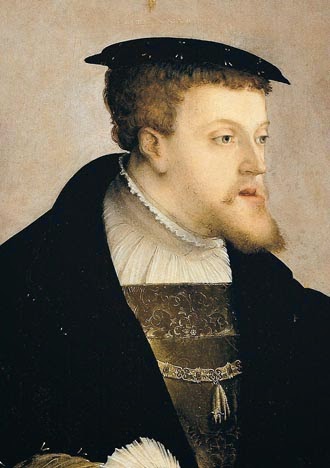 This guy was especially useful during planting season. 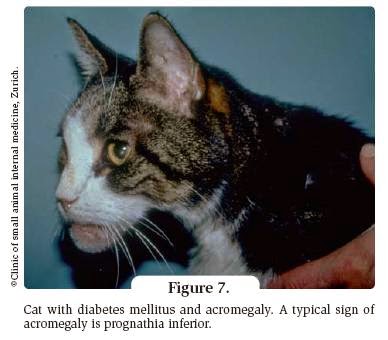 It's a little-known fact that Charles had a cat, which he named Charles Jr. How the Hapsburg genes ended up in a cat is anybody's guess, until you realize that Charles' half-sister married her uncle, who was also her first cousin. These marriages were called consanguineous, or "cat marriages". 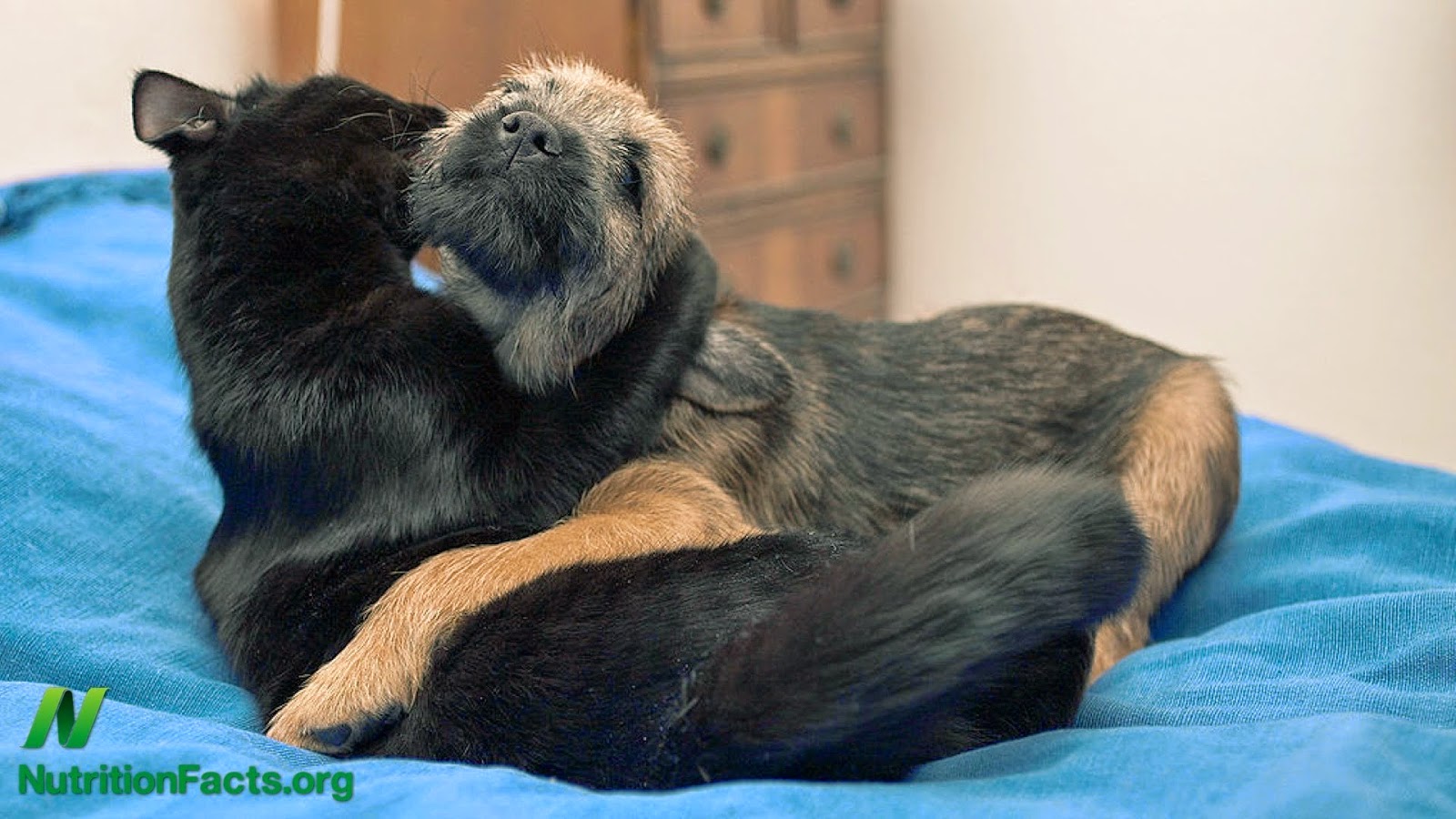 Though crossbreeding was strongly discouraged, it did sometimes happen through sheer boredom. Interspecies romance was carried on covertly, often on a blue blanket.

This is what Charles saw when he looked in the mirror: the ultimate Power Pout. It shattered only seconds after the portrait painter was finished, resulting in his beheading in the public square.

Artist Kara Walker Draws Us Into Bitter History With Something Sweet 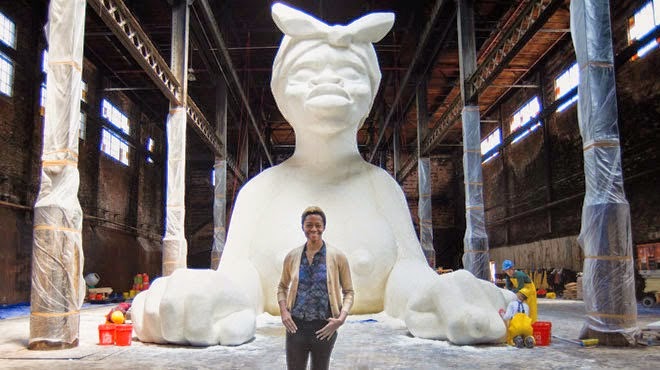 Kara Walker was barely out of art school when she won a MacArthur Foundation "genius" grant, in 1997. Back then, her early work shocked audiences in part because her murals looked so charming from a distance. Black paper shadow portraits of colonial figures seemed to dance on white gallery walls; but lean in and you'd find your nose pressed up against images of slavery's horrors — mammies, masters, lynchings and sexual violence.

In other words, Walker is used to filling a room. But this spring she was asked to fill a warehouse — the abandoned Domino Sugar factory in New York. It's about to be leveled to make way for condos and offices, but before it goes, Walker was asked to use this cavernous, urban ruin for something special. Walker took me on a tour of the show a day before it opened. The factory is covered in sugar — it almost looks like insulation or burned cotton candy.

"It's a little bit sticky in some areas ..." she said. "There's sugar caked up in the rafters."

I was so busy trying not to get molasses on my shoes that when I turned the corner, I was stunned. There in the middle of this dark hall was a bright, white sphinx. The effect is the opposite of those white-walled galleries; a dark space and a towering white sculpture made of — what else? — sugar. 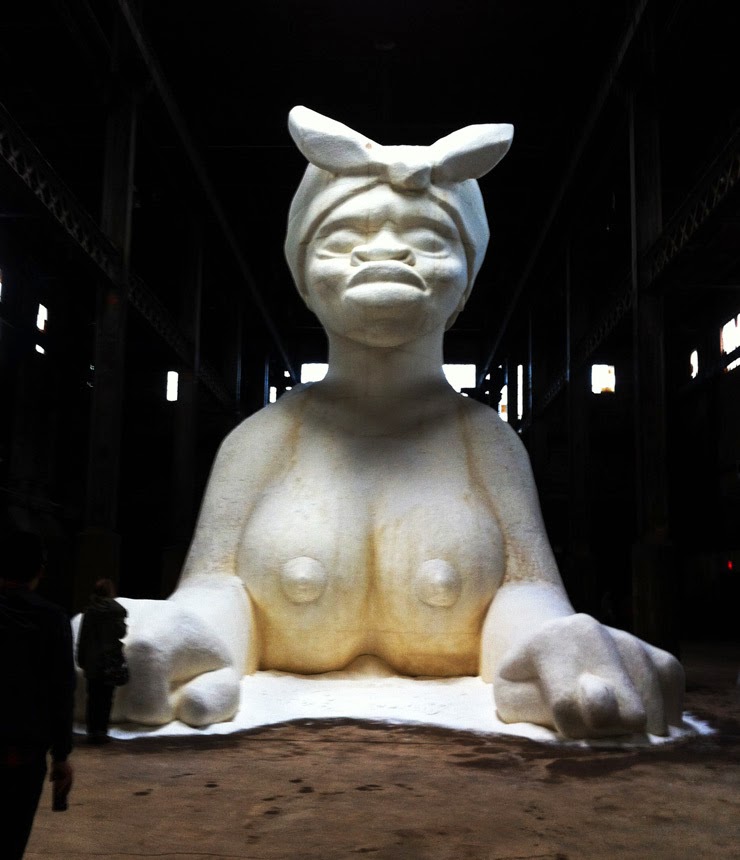 "What we're seeing, for lack of a better term, is the head of a woman who has very African, black features," Walker explained. "She sits somewhere in between the kind of mammy figure of old and something a little bit more recognizable — recognizably human. ... [She has] very full lips; high cheekbones; eyes that have no eyes, [that] seem to be either looking out or closed; and a kerchief on her head. She's positioned with her arms flat out across the ground and large breasts that are staring at you."

Walker has dreamed up a "subtlety" — that's what sugar sculptures were called in medieval times. They were a luxury confectioners created for special occasions. 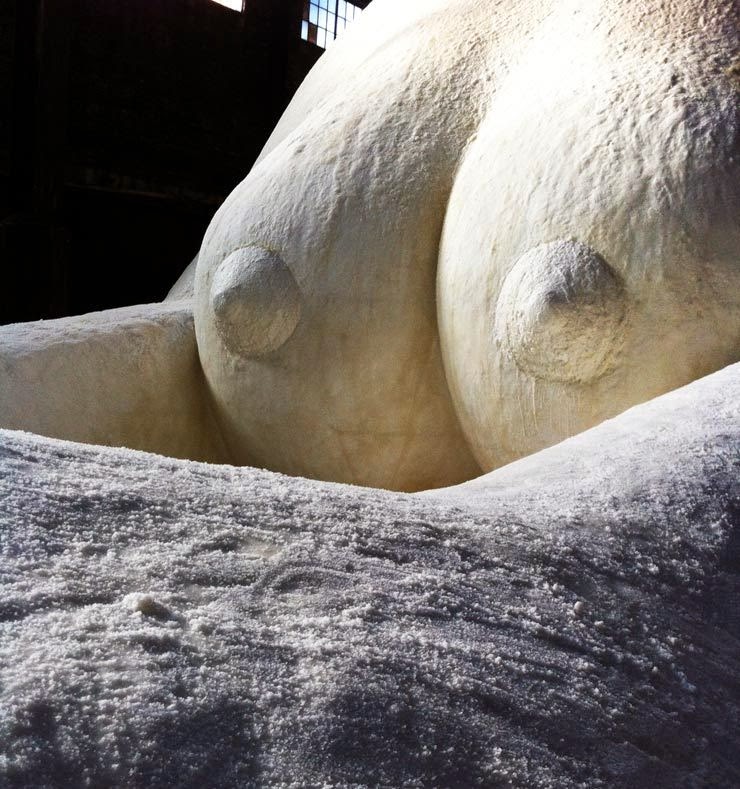 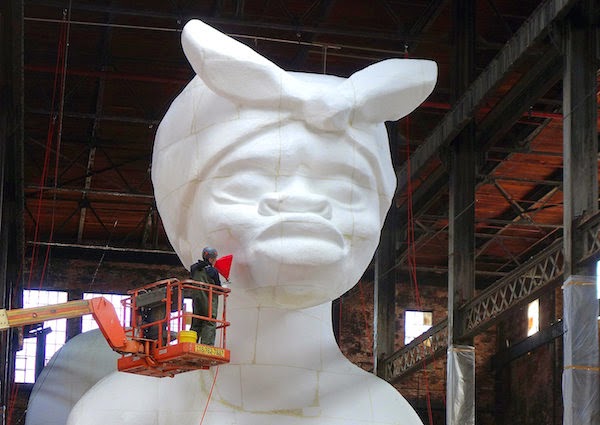 To understand where all this is going, you need look no further than Walker's teasingly long title for the show: "A Subtlety or the Marvelous Sugar Baby an Homage to the unpaid and overworked Artisans who have refined our Sweet tastes from the cane fields to the Kitchens of the New World on the Occasion of the demolition of the Domino Sugar Refining Plant."

I know, it's a mouthful. But Walker has this wide smile and as she sweeps her hands around in broad gestures, white tides of sugar dust ripple at the edge of her feet — and she sells it. 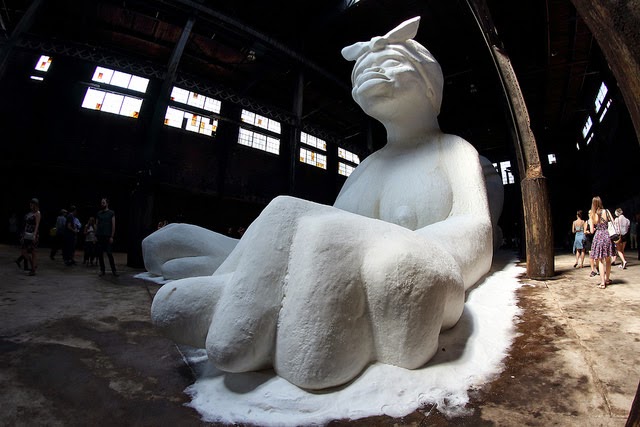 "It was very fun and childlike to, you know, have your hands in a bucket full of sugar, or a 50-pound bag of sugar, throwing it out onto the floor," she says.

She's doing what she does best: drawing you in with something sweet, something almost charming, before you realize you've admired something disturbing. In this case, that's the horror-riddled Caribbean slave trade that helped fuel the industrial gains of the 18th and 19th centuries; a slave trade built to profit from an insatiable Western market for refined sugar treats and rum. 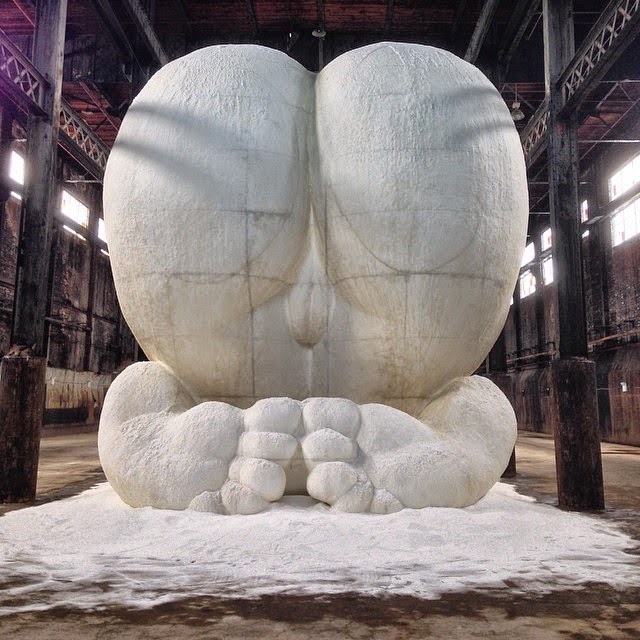 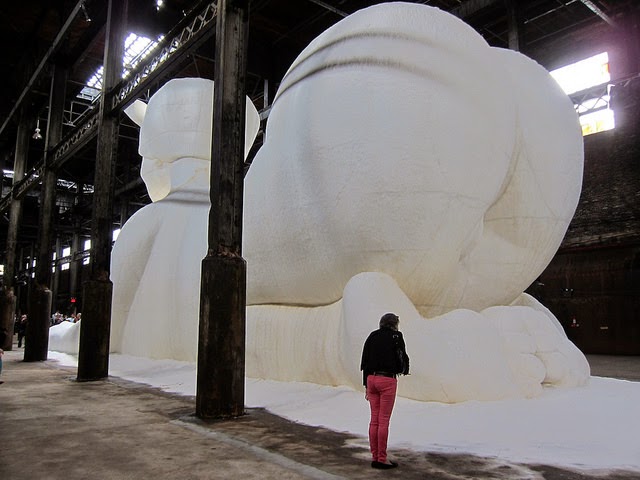 "Basically, it was blood sugar," Walker says. "Like we talk about blood diamonds today, there were pamphlets saying this sugar has blood on its hands."

She explains that to make the sugar, the cane had to be fed into large mills by hand. It was a dangerous process: Slaves lost hands, arms, limbs and lives.

"I've been kind of back and forth with my reverence for sugar," Walker says. "Like, how we're all kind of invested in its production without really realizing just what goes into it; how much chemistry goes into extracting whiteness from the sugar cane." 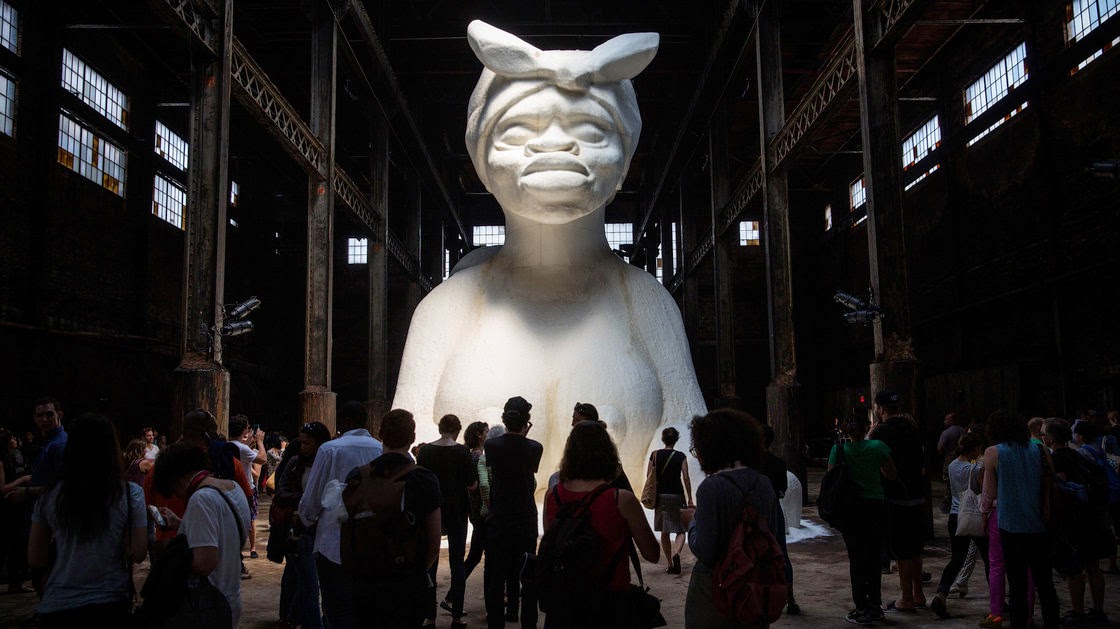 Walker went down a rabbit hole of sugar history, at one point stumbling on some black figurines online — the type of racial tchotchkes that turn up in a sea of mammy cookie jars. They were ceramic, brown-skinned boys carrying baskets. Those were the size of dolls, but Walker's are 5 feet high, some made entirely of molasses-colored candy. Fifteen of them are posed throughout the factory floor, leading the way to her sugar sphinx.

The boys are cute and apple-cheeked, but they're also kind of scary — some of the melted candy looks a lot like blood.

"I knew that the candy ones wouldn't last," Walker says. "That was part of the point was that they were going to be in this non-climate-controlled space, slowly melting away and disintegrating. But what's happened is we lost two of these guys in the last two days or so." 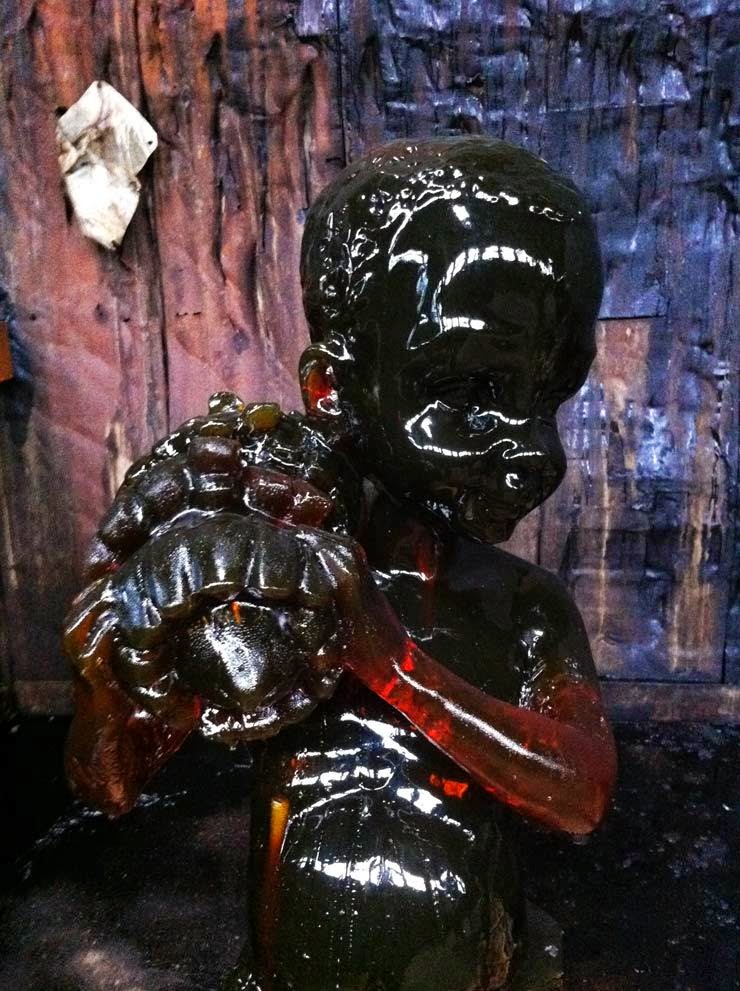 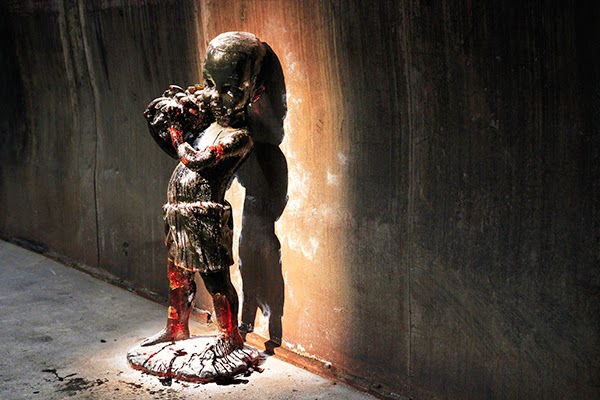 Losing those figures in service of the sugar is the slave trade in a nutshell.

"Also in a nutshell," Walker says, "and maybe a little bit hammer-over-the-head, is that some of the pieces of the broken boys I threw into the baskets of the unbroken boys."

OK, that's not so subtle, but it's also not unusual for Kara Walker. She's dressed in a shiny, oversize baseball jacket emblazoned with the gold face of King Tut on it. I ask her if at a certain point she worries about doing work that is seen as being just about race. 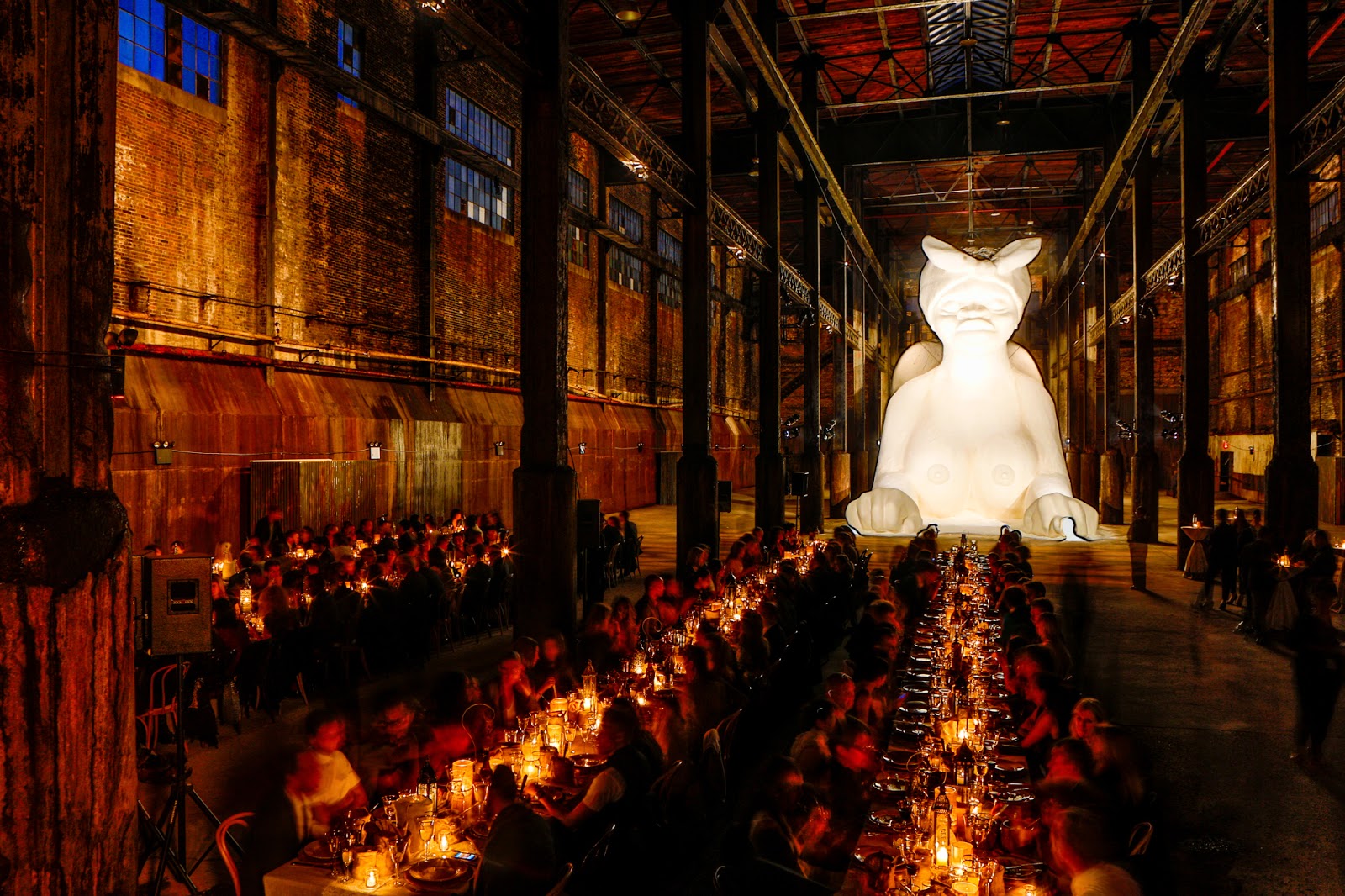 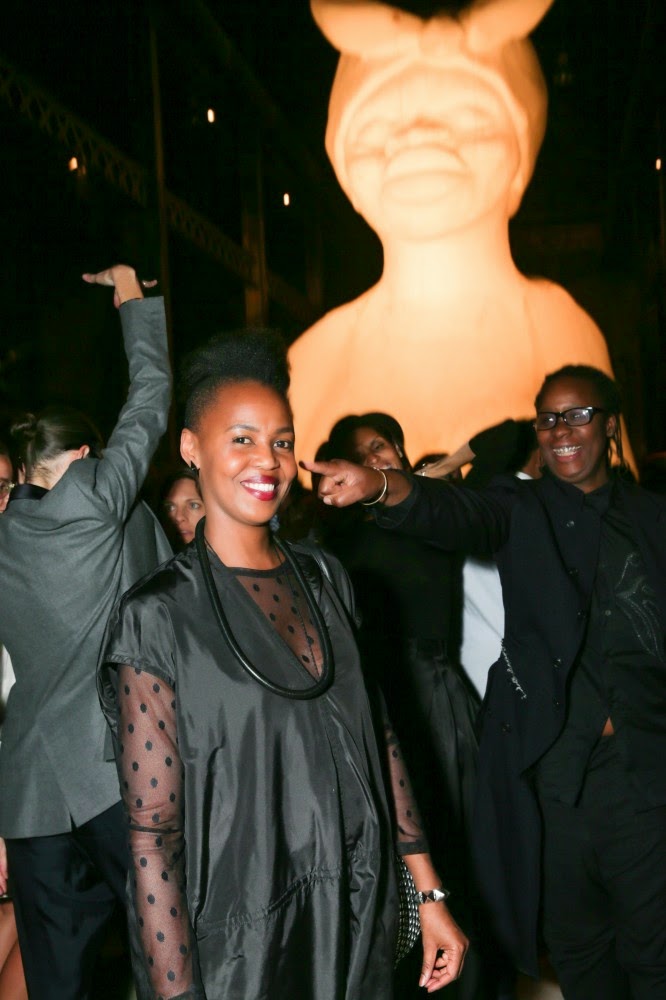 "I don't really see it as just about race," she says. "I mean, I think that my work is about trying to get a grasp on history. I mean, I guess it's just kind of a trap, in a way, that I decided to set my foot into early on, which is the trap of race — to say that it's about race when it's kind of about this larger concern about being." 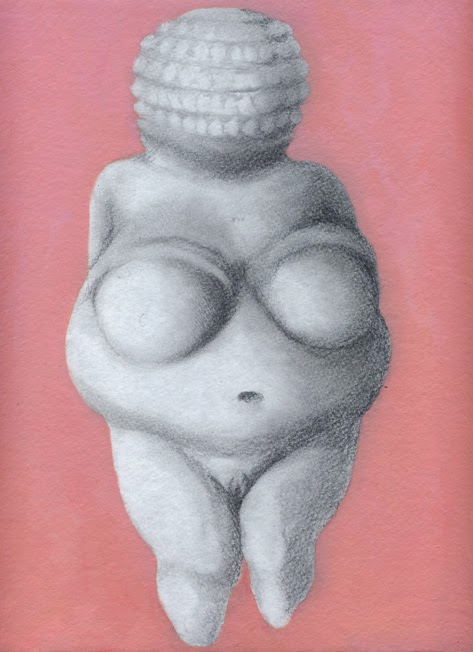 BLOGGER'S BLAH BLAH BLAH. When I first read about this today, I was astonished. It was the most innovative thing I'd seen in years, gorgeous in a scary, monumental way. It's Mammy as Ramses, as Isis, as Mount Rushmore carving, as the Venus of Willendorf with a scarf tied around her head. She's Goliath, she's Gulliver, she's everything God-sized and oversized and improbable. Everything about it, from the jutting fertility-symbol breasts to the enormous rounded butt thrust up either as an offering or a giant ass-up fuck you, to the face that is Sphynxlike and  impossible to read, is provocative and even thrilling.

But I always have a strange stab when I see art like this. I truly think, whether this is irrational or not, if I had been able to get a career like this going when I was that young, if I had had that much acclaim and affirmation, recognition of my talent, opportunities even, my life would have been totally different. Happier? Hell, it would've been ecstatic, and the problems I've had - oh God, let's not get into the problems I've had - never would have happened at all, because I would have been an Artist. 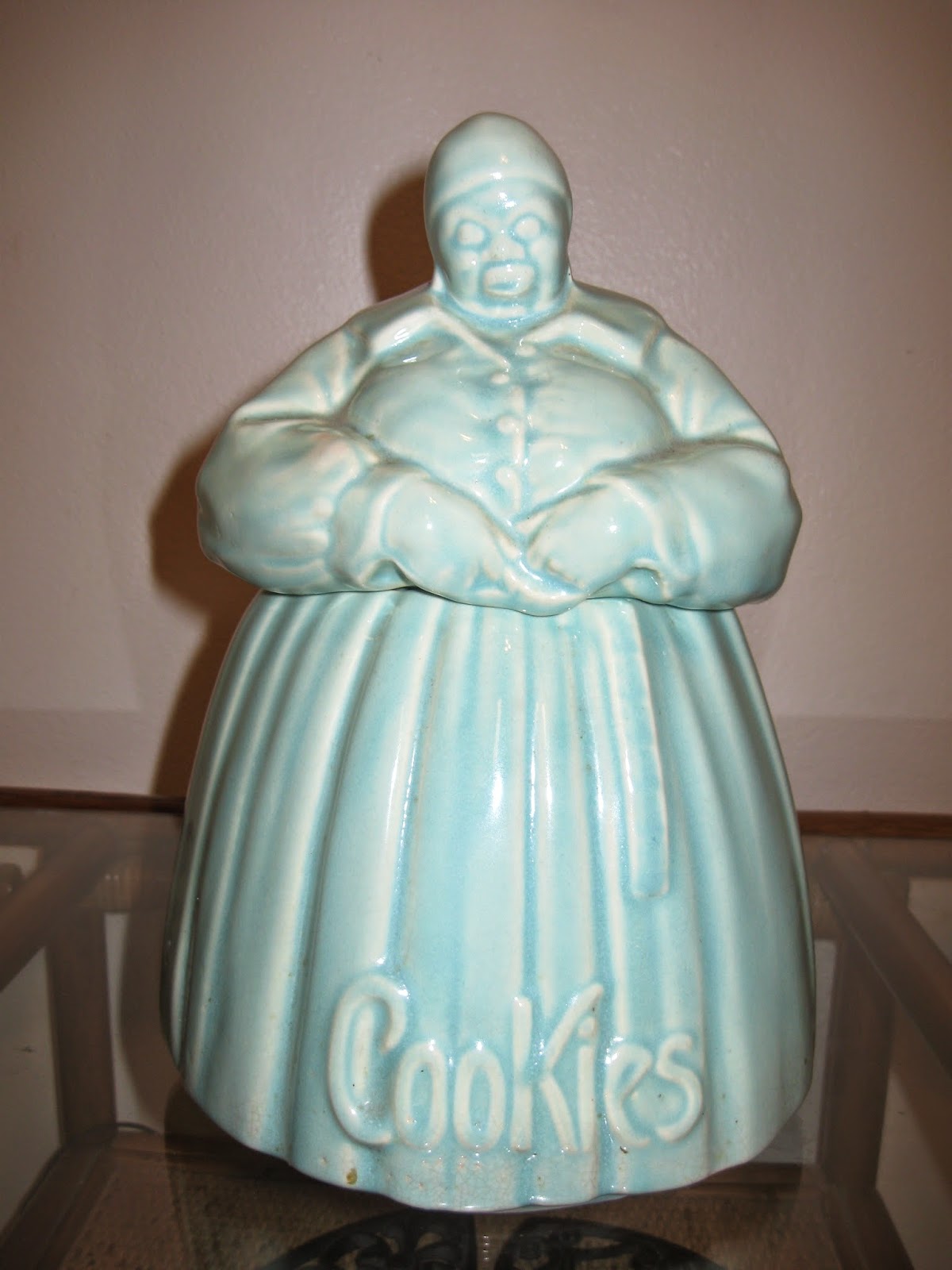 Logic tries to scream at me that women artists, in particular, can be self-destructive and even suicidal, that no amount of acclaim or even love is ever enough. And I don't believe it, because in the core of my doomed little brain I think success solves everything. I just feel that way, I am convinced.

But that's a mere sideline. This was a headspinning project that must have been built to scale by a huge team of people, and I am not sure how all that sparkling white sugar was layered on. I know there are other articles about this astonishing display, but right now I'm tired and I don't want to read any more. My own life is mystifying, not very productive it seems, and I'm not expressing anything of note. But maybe I should take heart in the fact that at least somebody is. 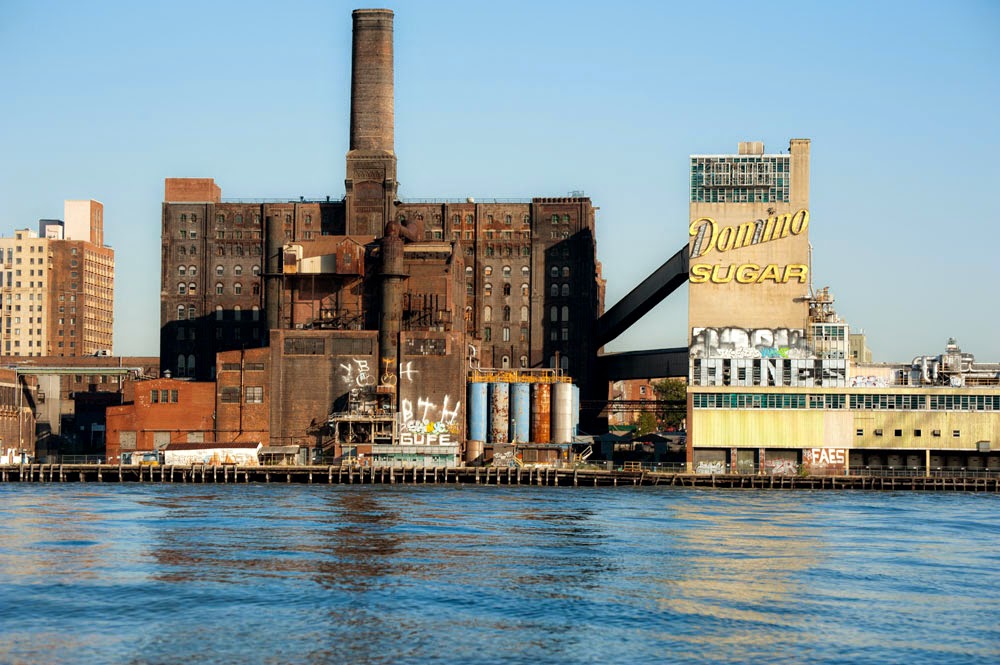 Posted by Margaret Gunning at 12:14 AM 2 comments: