Mother's Little Helpers (or: "doctor please, some more of these") 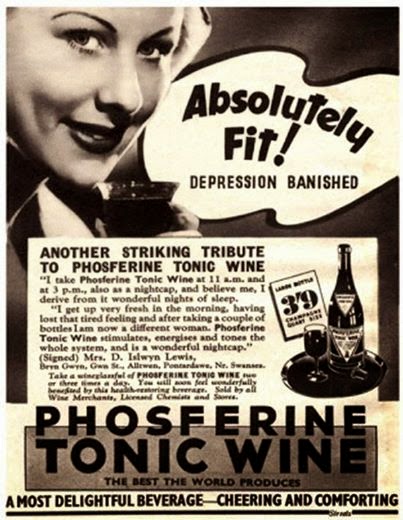 "I take Phosferine Tonic Wine at 11 a.m. and at 3 p.m., also as a nightcap, and believe me, I derive from it wonderful nights of sleep. I get up very fresh in the morning, having lost that tired feeling and after taking a couple of bottles I am now a different woman. Phosferine Tonic Wine stimulates, energizes and tones the whole system, and is a wonderful nightcap."

(I note in the fine print that this woman hails from Swansea,Wales, Dylan Thomas' home town. That explains a lot.) 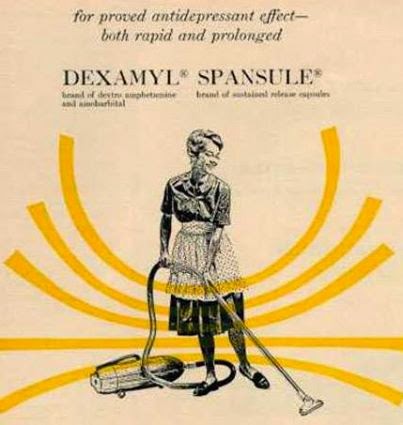 Text reads: 35, single and psychoneurotic. The purser on her cruise ship took the last snapshot of Jan. You probably see many such Jans in your practice. The unmarrieds with low self-esteem. Jan never found a man to measure up to her father. Now she realizes she's in a losing pattern - and that she may never marry.

Valium (diazepam) can be a useful adjunct in the therapy of the tense, over-anxious patient who has a neurotic sense of failure, guilt or loss. Over the years, Valium has proven its value in the relief of psychoneurotic states - anxiety, apprehension, agitation, alone or with depressive symptoms.

Valium 10 mg. tablets help relieve the emotional "storms" of psychoneurotic tension and the depressive symptoms that can go hand-in-hand with it. Valium 2-mg. or 5-mg. tablets are usually sufficient for milder tension and anxiety states. An h. s. dose added to the t. i. d. dose often facilitates a good night's rest.

Oh how I wish I could see those photos more clearly, as I think they demonstrate the sad downward spiral of Jan's life as she dates men who are lower and lower on the social totem pole. At the end, she's taking handfuls of Valium with some drunken and probably gay purser. But hey, if it helps her sleep. . . 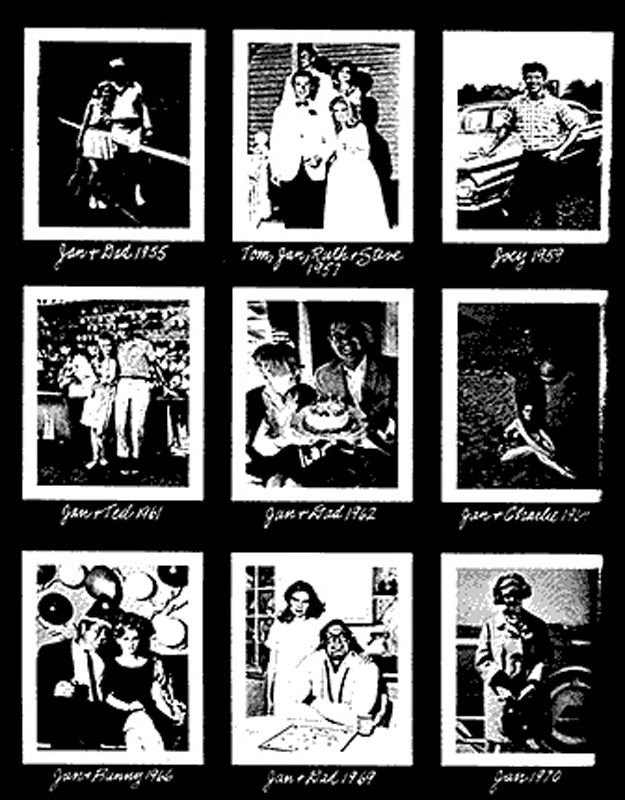 Whoawww now! This is saying even more than I thought it was! This is a little girl who is hung up on her Daddy. So obviously she needs to be chock full 'o Valium in order to cope, if not survive. Yes, there was a time when her life looked hopeful, when she had lots of friends and even boy friends, but say, didn't she seem to go through an awful LOT of boy friends? Did this mean she was a raving slut, or a pussy-zippered prude? The ad implies that none of these nice young fellers was quite good enough for her - shame on her for being so picky, or could it be - could it be there is actually "something wrong" with Jan, something so awful we dare not speak its name?

I'm just thinking, TEN milligrams? I've been told that drugs that end in "pam" are all in the same family and do more-or-less the same thing. If you were swallowing tens regularly, it wouldn't be long until you were an emotional zombie. I have to take clonazepam for leg cramps at night, and the prescription is HALF A MILLIGRAM. That's right. I have never taken more than that because it wouldn't do me any earthly good, and because I don't want to feel groggy and out-of-it in the morning. I WANT my emotional storms, thank you very much.

But just think of all the women who were addicted, who were lost. It hasn't changed enough to suit me. Women in the psychiatric system are still patronized and treated with more disdain and disrespectfulness than men with similar disorders. They're wrongly or over-medicated, with a cookie cutter approach: just throw this at her, or that. Seroquel seems popular now, but you wait, it'll be another flavor in a year or so.

And nowhere does it mention the possibility that real relief of her "symptoms" will only come by breaking through to a more courageous, more authentic life. Which generally means telling the doctors to go piss up a rope. Because they don't know anything about us anyway, do they?

For more absolutely insane ads that patronize women and paint them as screamimg meemies with no legitimate cause to complain, just click on the magic link, below!

(And sorry about that Mornidine. It's another name for Thalidomide.)

Posted by Margaret Gunning at 10:08 PM No comments: