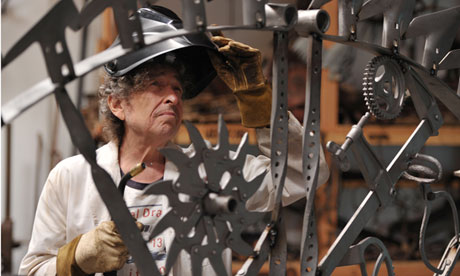 Bob Dylan works on one of his iron gates, which will feature in the Halcyon gallery's Mood Swings exhibition. Photograph: John Shearer/Rebecca Ward/PA

Come writers and critics who prophesise with your pen and keep your eyes wide … because Bob Dylan is welding gates.

The Halcyon gallery in London has announced plans to exhibit ironworks designed and made by the musician as he continues his career reinvention as an exhibiting visual artist.

Seven iron gates Dylan has welded out of vintage iron and objects including a wrench, roller skate, meat grinder and lawn tools, will go on display for the first time, in an exhibition opening in November, alongside his paintings and signed limited editions.

Dylan said: "I've been around iron all my life ever since I was a kid. I was born and raised in iron ore country where you could breathe it and smell it every day. And I've always worked with it in one form or another.

"Gates appeal to me because of the negative space they allow. They can be closed but at the same time they allow the seasons and breezes to enter and flow. They can shut you out or shut you in. And in some ways there is no difference." 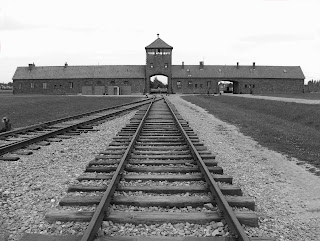 Dylan would say he has been a visual artist most of his life but it is only in the past six years that he has been exhibiting and selling work. His first museum show was staged in Chemnitz, Germany, in 2007.

He has had success and the National Portrait Gallery is at the moment showing 12 pastel portraits of his in a small display which will stay until January.

The Halcyon's forthcoming show, entitled Mood Swings, will "be the most comprehensive and authoritative collection of Bob Dylan's art to date", said the gallery's director, Paul Green.

Green added: "While Dylan has been a committed visual artist for more than four decades, this exhibition will cast new light on one of the world's most important and influential cultural figures of our time. His iron works demonstrate his boundless creativity and talent." 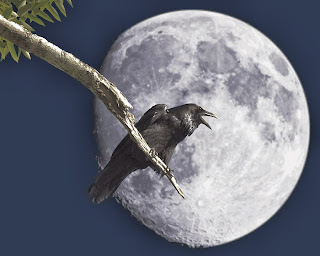 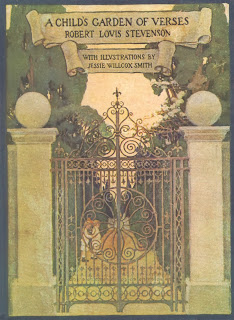 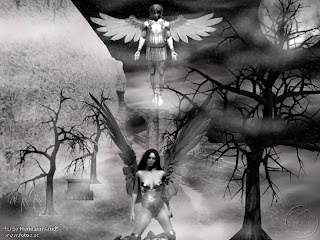 The kingdoms of Experience
In the precious wind they rot
While paupers change possessions
Each one wishing for what the other has got
And the princess and the prince
Discuss what’s real and what is not
It doesn’t matter inside the Gates of Eden
The foreign sun, it squints upon
A bed that is never mine
As friends and other strangers
From their fates try to resign
Leaving men wholly, totally free
To do anything they wish to do but die
And there are no trials inside the Gates of Eden 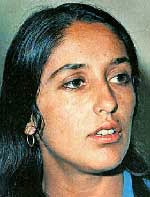 Posted by Margaret Gunning at 1:14 PM No comments:

Eraserhead: turn off the sound! 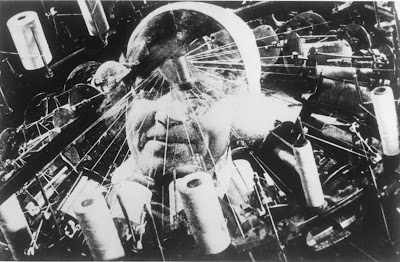 It's like Alice's Restaurant - you can get anything you want - and if there's nothing there, try coming back in a couple of months. It is ever-evolving, a ravenous monster engulfing mostly garbage and crap, but once in a while. . .

What I don't like about it, since I am such an avid collector of images, is the utter impossibility of finding the provenance of nearly all photographs. Yes, there are various methods to trace the sources, and I've tried them all, but they don't work. These images, pretty much all of them, have been Pinterested and Tumblrd and Flickred and Facebooked and blogged and reblogged so many times, no one knows where they came from.

So I always feel a bit guillty about using them. Only once did I take a post down because someone protested I had used an image that belonged to him, and when that happened I was happy to oblige.

So. . . last night. . . or, early in the morning. . . I was nosing around Google images, probably looking for more from the tens of thousands of Harold Lloyd images on the net, and found. . .a couple of weirdies.

I don't get the first one, I don't. It's some demented-looking guy surrounded by rolls of paper towels. He looks a little like an insane James Mason. Beams radiate from a point on his forehead. The whole thing has the feeling of a nightmare. 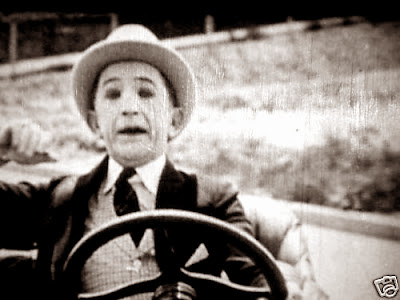 Then there's. . . this. He or it has holes for eyes and the look of an embalmed corpse. I don't want to look at it, or him, someone or something from a silent movie that never should have been made.

As always happens on the internet, one thing leads to another as surely as in an incipient affair. And creepiness is magnetically attracted to creepiness. Last night, or morning, in my near-stupor, I stumbled on the David Lynch horror classic Eraserhead on YouTube - the whole thing. It was late enough that I had turned the sound off my computer. It became a silent classic, complete with John Nance as a sort of Twilight Zone Harold Lloyd with his hair perpetually standing on end. 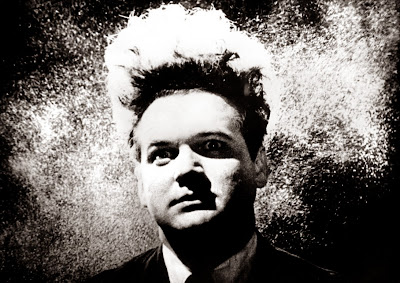 I had heard things about this movie, how horrific it was, a surreal and almost senseless drama about a man fathering (?) a deformed, screaming "baby" with a head like E. T.'s bastard child, its body all wrapped up in layers of gauze like a bad injury.

But without a sound track, it was - well, it was actually kind of stupid. It couldn't have been less scary, even boring, and the special effects were laughable, even the live chicken dancing around on the main character's plate.

Alfred Hitchcock, who knew everything about horror and jerking his audience on a string for 2 hours, once said that it was the sound track that made a horror film resonate on a primal level. Think of the stabbing scene from Psycho: without that screeching music and the awful sound of the knife penetrating  flesh, it would be nothing. 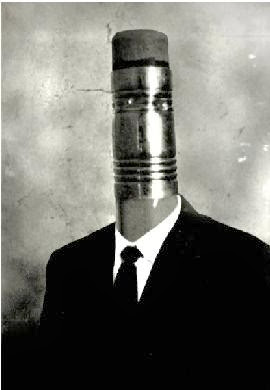 Why is this? In the womb, babies are very sensitive to sound. We hear before we see. I can attest to this. Having been pregnant twice, I recall my babies jumping at loud noises (particularly my daughter, the kind of child who used to be called "high-strung" and is now called ADHD, QRSTUV, and any number of other dire disorders. By the way, she's 36 now and just fine.)

Point is, we need sound to anchor us in reality. Think then of the magic of a silent movie. Think of how actors had to make up the deficit, the anchoring we all depend on for a movie to make sense.

How did they do this? At first, kind of badly. Over-gesturing, over-the-top facial expressions (even in dramas - ever seen Birth of a Nation or Intolerance?). Very gradually over the 25 years or so that movies evolved towards sound, acting became more subtle. But it must have also been much more demanding for the actors.

The switch to sound movies, then, must have been a horrendous jolt, because suddenly the medium had to take an unprecedented leap. The missing element was plugged in, the baby could hear again, and another part of the brain had to be engaged to make sense of it at all.

And you can imagine what the actors went through.

I knit a lot while "watching" TV, and in many cases it's more like I'm listening to the radio. But if the sound were turned off, what I was watching would make no sense at all. It would make very little sense even if I were actually watching it. Dialogue tells us how to feel, where to laugh or cry. For the most part, it tells us everything we need to know.

So how did actors communicate so well during the silent era? It was a new kind of acting, nothing like stage acting, that would - eerily - disappear forever in less than three decades. Silent film (which until then had been called "film", or rather "pictures") would seem as irrelevant as some inane Marcel Marceau walking-against-the-wind sketch from the Red Skelton Show.

Ah, but now it emerges from the grave. People are sick of Charlie Sheen barking at us and are in the mood for some real acting. This strange twilight medium has begun to tunnel its way into the light. The fragile frames take us to a "there" that no longer exists, and can never be duplicated. 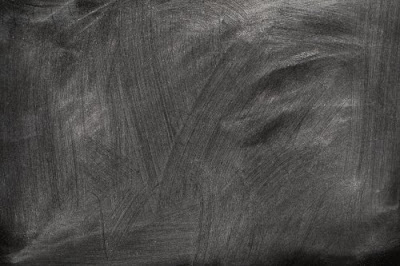 CODA: As always, there are post-blog reflections, but this time they are mighty strange.

This morning I decided to watch at least part of the YouTube video of Eraserhead, which I (mostly) watched last night with the sound turned off. I couldn't find it. The complete video of it that I had watched had been taken down, with one of those intimidating crooked face-things on it. Gone.  I doubt if I will have a chance to watch it again (somehow I don't think it will be shown on Turner Classic Movies), so I will always wonder how much the sound track contributed to its stomach-turning atmosphere.

One wonders at the timing. I was only given one chance. But creepiness leads to creepiness. Something else will ambush me - soon.

Posted by Margaret Gunning at 10:39 AM No comments: