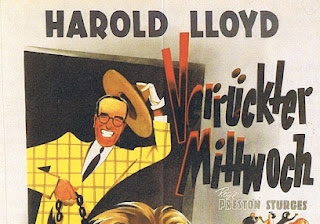 As I trudge through the (first round, only) edit of my novel, The Glass Character, which involves the very dishy but dead silent comedian Harold Lloyd, and as I (sometimes) wonder why I wrote the thing in the first place, it being so problematic in the editing process, I must refresh my mania for said Harold Lloyd by poking into some very strange promotional material indeed.

I think this one is for his last movie, a flop called The Sin of Harold Diddlebock, which involved a yellow plaid suit and a lion. The lion has been cut off the bottom for reasons unknown, which is too bad because I think this might have made a handsome poster if it had been left whole.  It looks to be in German, using the alternate title Mad Wednesday. Either way, the movie wasn't very good, though  that title (in German, at least)  is something memorable. 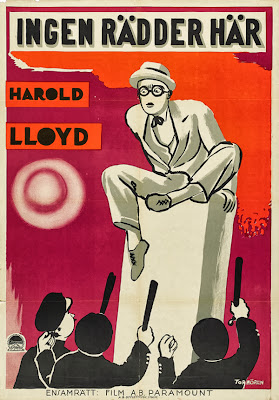 You might find this title on an Ikea poster. Things look a little out of proportion here: the cops are waving their sticks at him, which they never did in Safety Last!. So I honestly don't know what this is about. He looks like he's sitting on a very large rectangular cube of some sort. No clock in sight. Or could it be Mad Wednesday, where he does some aerial stunts, unfortunately all done with illusion? 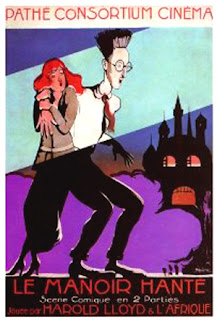 This one I really like. It could be for Haunted Spooks, an early one I like, in which I think his hair stands on end. He looks very European in this, very French. Mildred Davis looks doll-like beside him, and she has red hair, which I don't think she did. But all in all, this is a good-looking, stylish poster with great use of colour. 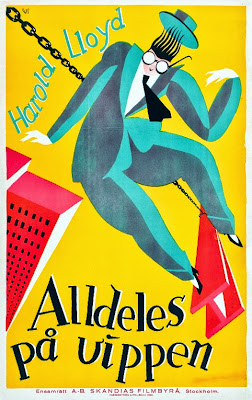 This one is TOO abstract for my tastes. Most of the European posters are.  I have no idea what language this is or what it means, though it must be Scandinavian. I don't know if he's swinging from a chain in this one, or falling. His legs look disturbingly fat, as if he is suffering from edema. His shoes look like lady shoes, let's face it, and what is that conelike red thing stuck to his feet? 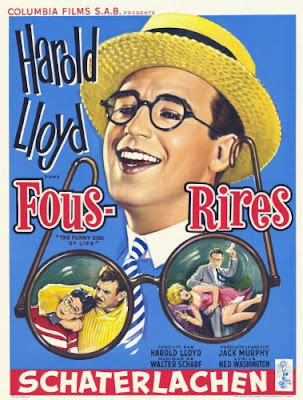 This one is interesting in that it's in more than one language. Schaterlachen is definitely German, but Fous-Rires looks French to me, meaning crazy laughter. One of the photos in the glasses lens is from The Freshman, the other from Girl Shy. I don't know why this is after six years of studying Lloyd, but I know a lot about him, though I am not allowed to let it show, or I am cut down to size as if it's an embarrassment. Must be karma. 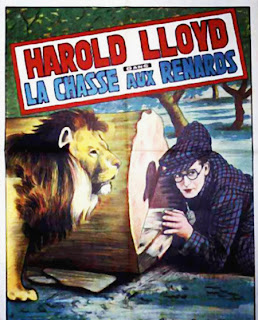 This one is called The Fox Hunt.I don't remember a Lloyd film with that name, but there is one - I think it's called Among Those Present - in which he must pass himself off as a gentleman capable of riding the meanest horse in the stable so he can impress his girl on a fox hunt. I think he gets her in the end. 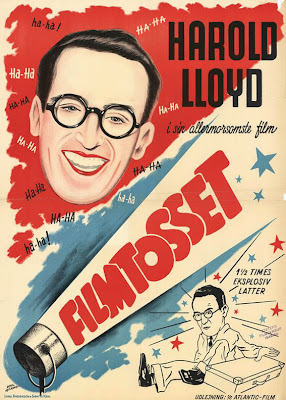 Filmtosset! So what's a filmtosset? Nobody knows. Is that a rocket going off, or what? No, it's a spotlight of some sort. He looks to be landing on his ass with a briefcase, so who knows what it's about. Oh! Maybe it's Movie Crazy, one of his early talkies. In that case, I'll pass. 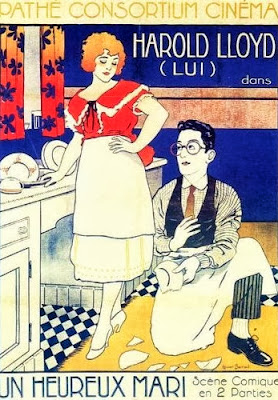 I've saved the best till last. Here is a lovely poster, an almost perfect match for a photo publicity shot (below), for the movie I Do (translated as Un Heureux Mari: a happy or lucky husband). It isn't just the charming drawing of the two of them in the kitchen, he tending to a broken plate, nor the saturated colors, but the inclusion of a nickname Lloyd wore for a very long time in Europe: Lui. Meaning: him. You know who I mean, that guy, the regular fellow. The regular fellow who captured the world. 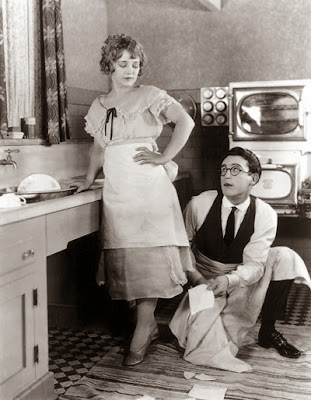 Posted by Margaret Gunning at 5:02 PM No comments: