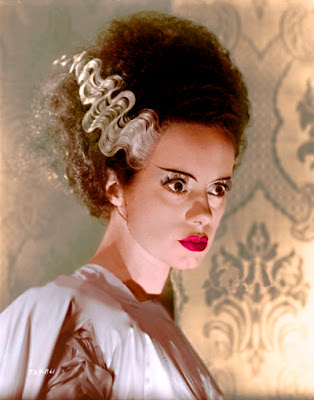 It's here.
For the first time.
Masterfully edited to show you just the good parts.
So you don't need to waste time on the story (which who cares about anyway).
And you can text and tweet and talk on the phone at the same time, cuz there's no stupid dialogue to listen to.
Yes. . . it's the first in a series of, oh, maybe four condensed movies which I predict will take off in the public imagination, that is if they remember them!

BRIDE OF FRANKENSTEIN. . . in fifteen seconds!

Posted by Margaret Gunning at 11:04 PM No comments:

EXPLAINED: why kids get ADHD

I don't know if anybody except me remembers a strange and wonderful show called TV Nation, Michael Moore's first foray into network television. This was before he became a self-important, helium-inflated buffoon who will do anything to call attention to himself.

We watched this show on (when else?) Friday nights, me and the kids. God, that was back when me and my kids watched TV together! We watched TV Nation, St. Elsewhere and (of course) SCTV. The kids were just pups then and I felt very close to them. Now they're practically middle-aged, and it's different.

Of course it's different. But what I wanted to point out with this dissertation is how much things have accelerated since the early '90s. TV Nation was considered cutting edge, hip, etc. (though watching some of the segments now makes me wince), and nowhere was this more evident than in the opening. It had rapidly-flashing images accompanied by electric guitar playing a sort of fluffy domestic tune. Later on I discovered it was almost an exact copy of the theme song to Rhoda.

Look at it now, and bo-o-o-o-oy, is it slo-o-o-o-ow. Each image lasts a full second, an eternity in today's  air time. The theme lasts about a minute and a half, which was common then. Compare and contrast to what some call today's hippest sitcom, The Big Bang Theory  (which my granddaughter loves:  huzzah!):

And they wonder why kids get ADHD.


(Post-blog. Now I also know why I make so many gifs. I think they're magic, which probably reveals my age, but more to the point, who the hell is going to watch a 10- or 15-minute YouTube video to see the 5 seconds I'm referring to? Instead, here are the 5 seconds, endlessly repeated in case you (like everyone else) can't absorb a ton of information in a microsecond.

Posted by Margaret Gunning at 9:49 AM 3 comments: