The above article in Salon by novelist Ted Heller was a real eye-opener for me, and I recognized many of the toils and snares he writes about. I sent the following response to my good buddy Matt Paust, and I think it's so blippin' brilliant that I just have to post it here! 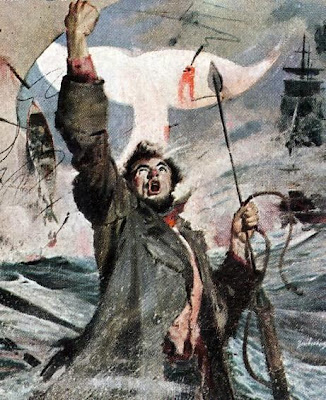 Wow. This is one of the best things I’ve read on the subject of trying to straddle the Brave New World and the Sucks-to-high-heaven Old World of publishing. He sounds bitter and extremely hurt, and is so raw emotionally he’s like an open wound.

But this is the trouble with writers, myself included (of course). A real business person rolls with the punches. I look at my daughter, who is a tough-minded TV journalist who does NOT take things personally. On her first day on the job as a reporter, a producer came up to her – oh goody, a producer, maybe she’s going to praise my first story – and said, “Shannon. Someone has to tell you this. Your makeup. It’s way off.” “Way off?” “You look like a ghost on the screen. Your face is disappearing.” “What should I do?” “Really trowel it on. I mean it – way thicker than you think you need.” 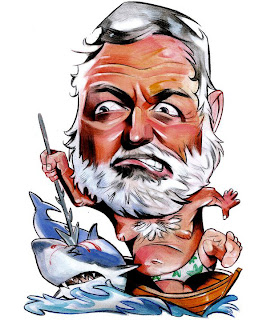 What was her response? She told me, excitedly, about her first day, the challenges, etc. Then she said – and she was not kidding – “God, I’m glad they told me about the makeup. My face was totally washed out. I fixed it today and it looks way better.” I mean it. Her makeup. Most women would whimper in the powder room, and she took it as useful advice.

Another thing – she applied for a consumer advocate job and a colleague kept saying, “You’re going to get it. You’re going to get it. You’re the best one for the job.” She didn’t get it. Instead, they hired someone from Toronto (the big bad city around here) named Linda Steele, who has since become a kind of superstar on the channel. I asked Shannon gingerly what she thought of Linda. “Oh, she’s great. I’m a big fan of hers. You know, she really is the best one for the job.”

Then I look at the cringeing and whinge-ing writers do, the minute injustice-collecting (this guy remembered every slight in gory detail) – and no one is a worse offender at it than me – and I wonder, are we really good business people? The topic of failure once came up, and Shannon said, “Yeah, lots of things have happened, but I don’t consider them failures.” Perhaps as a result, she has stayed afloat like a plucky duck and will probably go on to other things when she’s ready. (The other thing is, she is NOT married to her job and often says, “God, I hate being on television. The only part I like is the research and the legwork” – in other words, what most people would consider the drudgery.)

All this going on and on about my wonderful child (and I learn from her much more than she ever learned from me) is just to say, it’s hard for most of us (including Ted Heller? By the way, is he any relation to Joseph Heller?), because we DO put our nerves and flesh into the job and have no objectivity. I guess if we DID have objectivity, we wouldn’t have the sensitivity to be writers. These novels, they’re our babies. If someone dissed my makeup, I’d run home and go into a depression.

Another thing I notice – he wrote a great article, by the way, and I do see myself in it in many places (if on a much-smaller scale) – he does not mention social networking. He goes on and on about newspapers. He probably does network, because we all do, but it isn't uppermost in his article. Getting newspaper reviews and contacting editors seem to be at the top of his list. It's been my experience that after a couple of weeks, glowing newspaper reviews are fairly good for wrapping fish and almost never lead to decent sales. 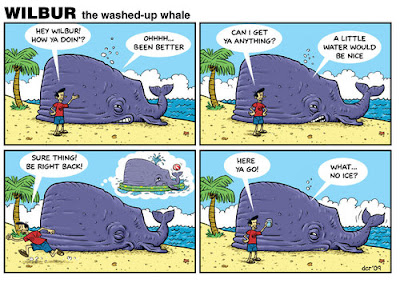 Sorry if this is wordy. I worked for newspapers for many years (reviewing – I did well over 300) and noticed the assignments were dwindling. Book sections were withering away, to be replaced by wire service "canned” pieces that had the flavor of “this guy got paid off”. If he is still thinking newspapers, he’s drilling a dry hole. I lost my Edmonton Journal position (and it actually was a position – I was with them more often than not for nearly 30 years) when my editor phoned me and said, “We’ve tanked, there’s no more books section. Sorry to see you go.”
Well, I couldn’t take THAT personally.

I think what you’re doing is really what you need to do. Get on the internet, use it, get on social networking wherever you can. Don’t wait for editors to email you back because they won’t. They’re inundated. Paper books are on the way out, and authors (even well-established ones) are getting desperate. Agents have gone over to non-fiction and children’s series, because that’s where the money is. They can’t afford to starve representing “literary fiction” or even fiction-fiction because it’s too dicey. 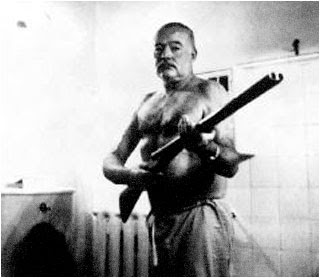 Nobody ever mentions this, but the real money is in celebrity memoirs. I watch some of the entertainment shows (blush – it’s professional development!) and in EVERY case Deborah Norville or whoever will say (i . e. about Amanda Knox or whoever is the narcissistic ditzhead of the week), “In her new book, to be released June 1. . . “ Billboard, billboard! Flashing phosphorescent billboard! And yet, I think these books also have a very short shelf life. I just stumbled across my copy of John Edwards’ memoir. John WHO?

This is getting very long, but I’ve been ruminating on all this for a very long time now. Everything has shifted seismically, and to be honest it doesn’t look like I’m going to get very far. I’ve tried a few less-orthodox things lately, but since I think it won’t happen if I talk about it, I’m not talking about it. The thing is, if a writer DOES think outside the box, they’re often humiliated for being arrogant or unrealistic, but if they don’t, they’re “-------".

This is why writers go crazy. Or is it the craziness, the abnormal empathy and sensitivity (and how often have I been accused of being “too sensitive”, as if it’s a crime) that makes us write? Most of us need to write. It’s what we do AND who we are. It’s that last part that does us in. To refer to my illustrious/practical daughter again: it’s really NOT who we are. It’s a job. Our work is a commodity that can be bought and sold. In fact, in being published, we are turning our work into a commodity. This is what we want, isn’t it? So over and over again, we’re going to get some version of “Whales, Mr. Melville?” It comes with the territory.

Good Lord, it's the Rabbitville Gazette! 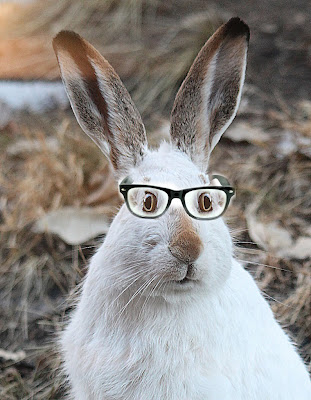 GOOD LORD! It's the Rabbitville Gazette! 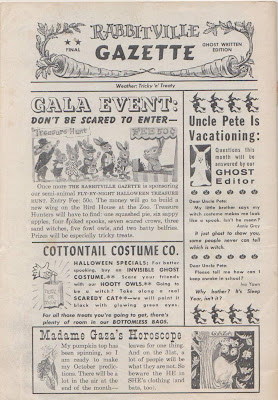 This is one of those oh-no-it-can't-be-so things, something dredged up from so far down in the well that I just assumed I had imagined it.

When I was in Miss Wray's class at McKeough School in Chatham, in Grade 3/4 (taken in one year so I could go to a special Grade 5, one of those '60s educational experiments that led to total chaos and zero learning), sometimes we had a bit of free time. We could read whatever we wanted. I remember reading something called the Rabbitville Gazette, in some magazine or other. In fact, I liked the Rabbitville Gazette so much that I pawed my way through stacks of magazines to find issues that had the Rabbitville Gazette in them (because I soon figured out that it didn't appear in every issue). 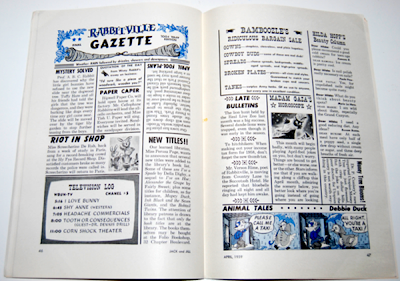 For some reason the name popped into my head today, I googled it, and. . .

YES! It really existed. It appeared montly in Jack and Jill magazine. I didn't subscribe to Jack and Jill, but it was common in classrooms. (I got a very strange magazine called Wee Wisdom which seemed to come out of the 1890s.) 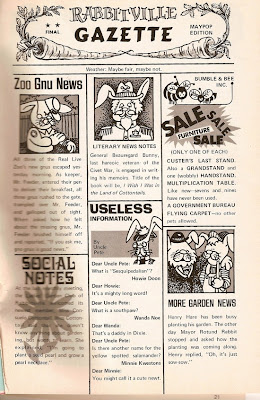 I can see why I liked the Rabbitville Gazette. Though I can't read very much of it, it's funny and charming  (I mean: Zoo Gnu News? A column called Useless Information?) And the Halloween "ghost editor" is best of all, though of course it would sail over the head of the average kid.

I like to picture a magazine run by rabbits. There would be no shortage of staff. Around March or April, everyone would suddenly disappear. Strange thumping noises would be common. Every once in a while there would be a sharp crack, followed by a piercing shriek.

Columns would be written about the atrocity of the lucky rabbit's foot, cautioning readers to count their feet every morning. 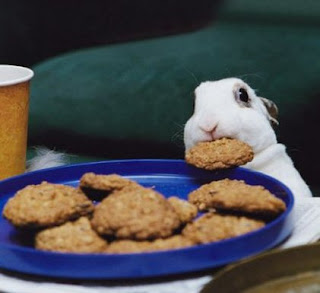 Not a lot of work would get done, rabbits being mostly concerned with other things. This is why they had to call in that "ghost editor".