My God, my God: the falling Wallendas 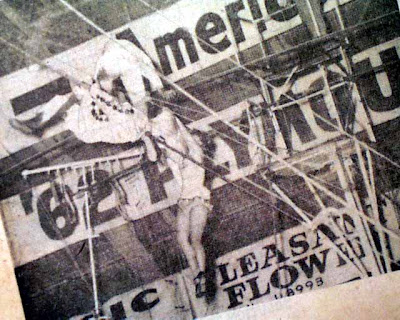 I don't know what it is about me. Just me? Look at reality TV. We all have this instinctive inner urge to ogle, to goggle. Other people's disasters fascinate us.

I was tempted to (but didn't) post a horrific 15-second YouTube clip of the patriarch of the Wallenda family attempting to walk a wire stretched between two high-rise buildings. He lost his balance, slipped, fell and hit the pavement. But even that isn't the worst part. Two guys are just standing around talking. Obviously they saw what happened - wouldn't the whole world be watching this incredible stunt? - and it doesn't even occur to them to try to help.  In the next second, twenty people run frantically toward the now-expired body. But what was up with those two guys? 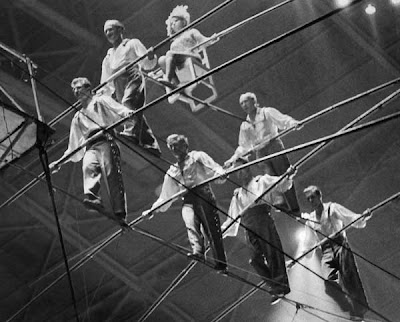 Just looking at a picture like this makes me queasy.

How could anybody find it enjoyable to watch this? For that matter, why did people used to (and still do, I hear) attend executions of death-row criminals? Why do we go to movies that scare the bejesus out of us, even pay good money for it?

Here are the Wallendas walking the wire at Detroit's Shrine Circus in 1962. They always worked without a net. Nets were for amateurs and sissies.  I never attended the Shrine Circus (I hated that smell of animal dung and the sweaty frightening clowns), but I could have. I lived close enough to Detroit that when the ground rumbled, our teacups began to rattle. In this photo, it's obvious already that things are going perilously wrong. The quivering symmetry of the first shot is coming undone. 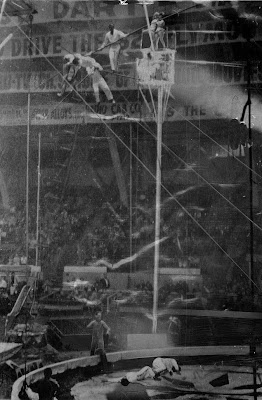 What happened? Post-disaster, one of the Wallendas claimed it was the man at the top of the pyramid. Quite simply, he lost his grip. With all that weight on both sides, a deviation of a fraction of a centimeter meant doom. It must have happened that night.

Obviously a few reporters were there, smoking cigarettes, taking swigs from hip flasks as they covered the most boring public event of the year. But suddenly, the cameras couldn't snap fast enough. 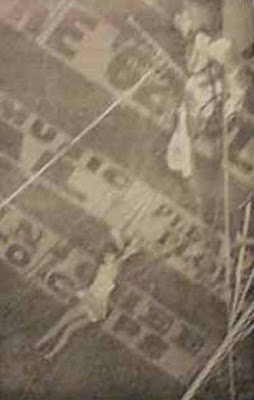 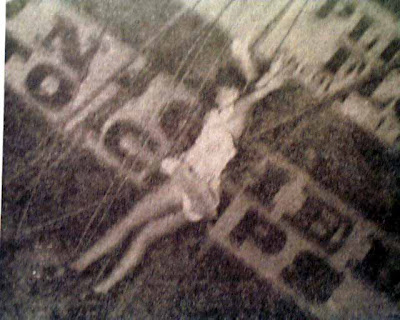 An interjection. There's something funny about these two pictures. That banner behind the woman was supposed to be horizontal. Here it's wildly askew. Someone tilted their camera, obviously, to make the shot look more dramatic. Here (below) is the same shot, rotated to normal: obviously the woman wasn't careening down at an angle, but being carefully lowered on a wire. The position of her hands makes that obvious. Like anyone who parachutes, an aerialist would be prepared for an eventual/inevitable fall, and certainly would NOT fall feet-first! 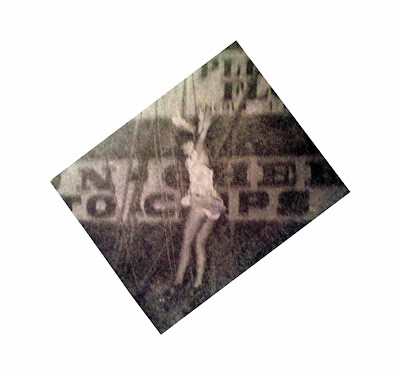 The more I look at this, the more I see the essential phoniness and dishonesty of the press. If the woman were actually falling, she would not be looking down at the ground at this angle. The corrected shot is almost like another picture. Her legs are relaxed and dangling, whereas her arms are flexed as she holds on. For shame, Detroit News. 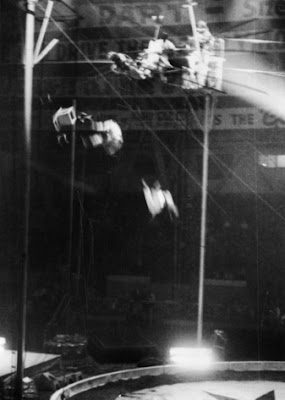 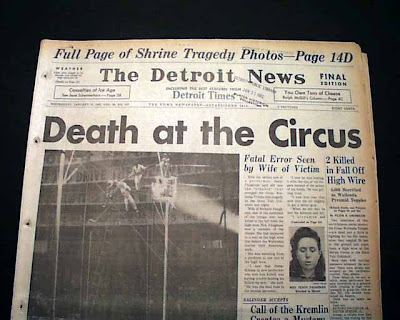 Call this the Day of the Jackal. The carnage was laid out for everyone to see. The Detroit News went on and on about it, pages and pages. Were there video clips? I think so, but not on YouTube. I've seen a couple seconds of it on documentaries about the Wallendas. It's horrendous. 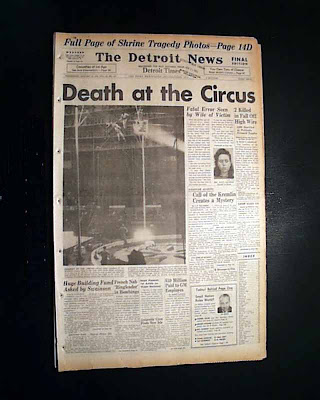 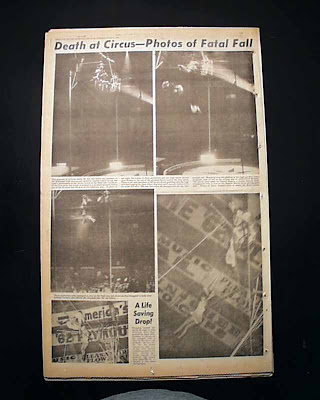 This catastrophe put Detroit on the map and was the biggest thing to happen to the entertainment industry since Milky's Party Time.

But think of the audience.

Think of the sickening screams, the horror, the disbelief. the bizarre part of the mind that insists, "Oh, it's all part of the act" (like people today, caught in terrorist attacks, who without fail say afterwards, "I thought I was in a movie"). 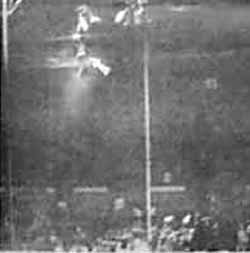 And the children. It wasn't common then to explain anything to them. (Still isn't, if you ask me.)  If we didn't talk about it, it just went away. Imagine the racing heart and overwhelming dread, that little spot of horror deep inside, never healed, just crouching there, while the adult wonders why he has heart disease, why he's so afraid of  heights.

Couldn't that buried trauma, like a tiny earthquake vibration gradually growing stronger and stronger, eventually crumble the core of a human being? Couldn't it? We call it "psychosomatic illness". I call it the human sickness, the thing that might just finish us after all. 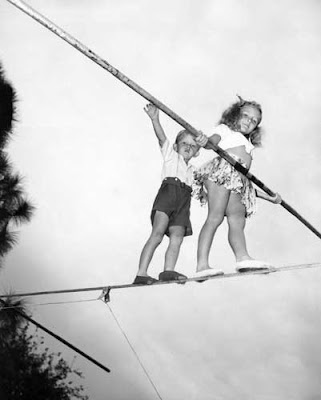 Lost and found, found and lost: the miracle of the Tube


This is one of those pieces I inadvertently tracked down through wonderful YouTube. I've been immersed in music lately, discovering those playlists of 148 complete symphonies end-to-end, many of them live performances with superb sound. I guess I didn't indulge before because I had a hard-and-fast rule: NO MUSIC while I was writing. Too distracting! My mind can't do two things at once.

But this writing doesn't matter so much (except to me): I write about whatever is at the top of my head (or over it!), and don't need to worry about some pecksniff of an editor picking it to pieces. It's wild and free. So maybe I CAN have music on while I write, because it isn't really writing, not like those miserable little 500-word blocks of text I had to turn out every week for newspapers. 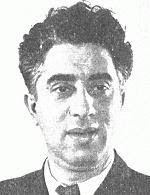 This piece by Khatchaturian (an Armenian whose music straddles conventional romanticism and sexual/edgy/spicy/fierce/exotic Armenianism, with a dose of early-20th-century dissonance on the side) is one that I heard in my childhood, which whether I liked it or not was drenched with classical music. I was expected to be a musician, a violinist specifically, though I had little talent and no inclination. The fact that I went back in my 40s and took nine years of violin instruction is another story.

My siblings were all vastly older than me, and always seemed to be coming home from university and Europe and stuff, and often they came bearing records. (And sometimes pot, but that's another story.) These were New Discoveries, things we hadn't heard before, outside the box of Bach and Brahms. Thinking back, there was nothing too spectacular about these things. Khatchaturian isn't exactly a secret, not with the Sabre Dance appearing on Ed Sullivan every week while Armenians juggled flaming torches. But this waltz, well. 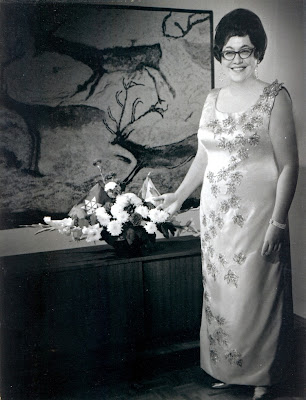 My brother called it Dark Waltz, and it would be right at home in today's climate of sexy vampires, Dark Shadows Redux, Beauty and the Beast gasping back to cheesy life, and Twilight. I searched and searched for the right version, played at the right tempo, as many of them are just too fast and miss the point: this is Armenia via Vienna, almost a wink or a trick or a parody of Strauss, with its lurking corners, sneaky dissonance and falling cadences. As a matter of fact, I have that queer feeling (did you know I'm queer? Neither did I, until this moment) that it is the SAME recording I listened to in my childhood. It's quite possible. Strange are the ways of YouTube, which to my mind gets better and better, so long as you ignore the Cretan-ish crap in the comments section. 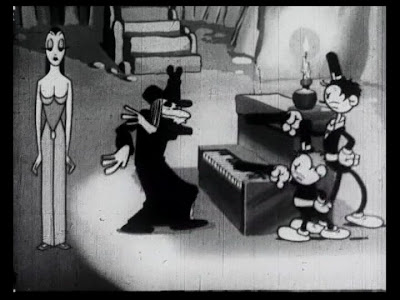 Things are within reach now. As far as I am concerned, I will never buy a CD again. I keep making discoveries, every day, and things from the past pop up and say, "HI!", with an idiotic look on their face. So I WASN'T hallucinating Clutch Cargo and his Pals Spinner and Paddlefoot, or Spunky and Tadpole, or I Married Joan (do-wah, do-wah!). It's all there, though I have no idea where people get these things, along with ancient Anacin commercials and even (selah, my Saviour) a rare clip of Milky the Clown bothering Little Nancy, the crippled poster child for the Whatever-it-is Pity Society in Detroit. 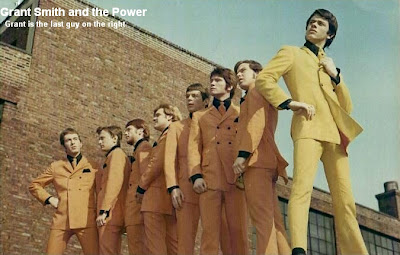 I mean, people must have vaults of this stuff in their basement. Hundreds, thousands of things, old TV themes like T. H. E. Cat (gifinated by me a few posts ago - what an amazing, elegant piece of animation!). Just stored? Do they come from musty old TV vaults? Or what? The mysterious provenance of them just makes it all better, I think. They seem to waft up from the past. Here I am again, only this time everything is different, and how. I'm not this bewildered little kid any more, but a bewildered adult with many of the same compulsions and dilemmas, with the same confusion as to why I am alive.

I was assigned this, my life; I did not choose it. I guess no one does. But it does seem a heavy burden, and a long one, a long trudge through unknown territory. I savour all the discoveries I make, no matter how tiny.