SMACKDOWN: Battle of the Creepy Clowns!

OK, I KNOW I post too many gifs. I'm of an older generation that still thinks they're Magic, and besides, I've learned how to make my own from YouTube snippets. And I'm bored and it's Friday and so what. If you don't like these, and you probably don't, don't look at them. Though my view count is at an all-time low, I am not the kind of social media prostitute that froths up business by wagging her ass. There, I've said. it.

This is Krinkles the Klown shilling for some cereal. Maybe he had aspirations beyond prancing around in a polka-dotted suit and wearing a doghouse on his head. He is plenty creepy and his makeup is classic clown, but the problem is, besides breaking through a big piece of paper, he doesn't DO much.

Milky, now. He was the bane of my childhood and star of his own show, Milky's Party Time. Like Krinkles, he was flogging a corporation, Twin Pines Dairy. Only one rare clip survives, showing him pulling a large object like a tumor out of  Little Nancy's face. Then he seems to shove it back into her face again, which I like. The clip is from some benefit for "crippled children", which is why poor Nancy must stand there on crutches for twenty minutes or so instead of sitting down comfortably. Milky looks like some ghastly vision of Pagliaccio, ready to slay his rival with a butcher knife. His costume has always reminded me, most disturbingly, of the KKK.

Like I said, Krinkles mainly just sits there and talks. He talks about how the cereal makes him "krinkle". I wonder if he is some strange forerunner of Krusty on The Simpsons. And there's that damned ruffle again.

I just noticed this (after 50 years): what's that on his head? A funnel with a sort of handle on it, I guess.

This is where it gets WAY weird, the thing with the sausages. He keeps rummaging around in his pants for some reason. When you look at some of the body language (i. e. his face getting closer and closer to the sausage, which is provocatively curved), you can see this is something that would not be considered appropriate today. And boy, is Nancy getting tired! It must hurt under her arms. And let's hope Milky's breath isn't too bad. Circus performers are notorious for their booze-and-tobacco fumes.

Ah, the taste test! How many takes did it require? He may have chewed his way through a few boxes of that stuff. But wait! Can you really SEE the spoon? Is he (like Milky) a genius at sleight-of-hand and thus able to ram the spoon into his clowny white face with no cereal on it? If so, unlike Milky, he wouldn't have to put anything in his mouth at all.

Would you want this clown pulling sausages out of your child's ear? You can sit down now, Nancy. 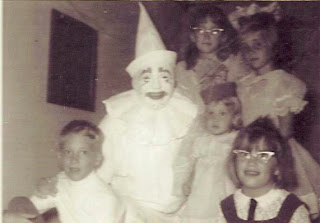 POST-POST: In my haste to present these macabre magicians in all their frightening glory, I forgot the most important thing.

Which clown was the vilest, the scariest, the most sinister? Who pulled the most incomprehensible pranks on poor unsuspecting children?

I didn't even need to count your votes. 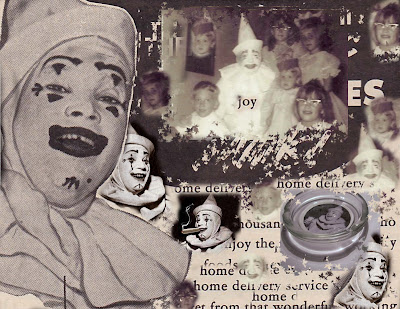 I have put together this merry montage to express my personal feelings about Milky. Now for a few candid shots. . . 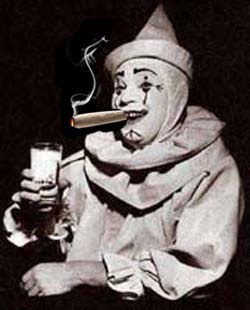 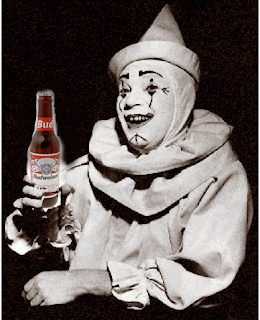 
I have completely lost the text to this. What a horrible feeling. It just. . . went away. What I was GOING to say is that this reminds me of some bizarre experiment on The Big Bang Theory. We have contests at our house about the theme song: how fast you can sing it, word-perfect. So, sigh, here are the words:

Our whole universe was in a hot, dense state
Then nearly fourteen billion years ago expansion started - wait -
The earth began to cool, the autotrophes began to drool
Neanderthals developed tools, we built a wall
(We built the pyramids!)
Math, science, history
Unravelling the mystery
That all started with a big bang
BANG!!!

I get stuck on "developed" (invented?) and "unravelling" (examining?). Who cares anyway? There's no prize.

It's Friday and I lost my text and hardly anyone reads this shit anyway, so why don't I just quit?

P. S. this only gets interesting around 1:27. Before that it's all setup.

Posted by Margaret Gunning at 10:12 AM No comments: