Why I won't think about Marlon Brando 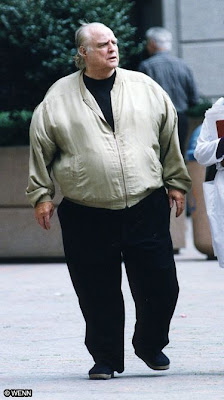 I am not reading Brando, the behemoth biography by Peter Manso which I somehow stumbled through (I think) back in 1994. I am not reading it because it is too big. I can't accomodate it in bed, which is where I read. It slides off my lap or collapses on to my knees. 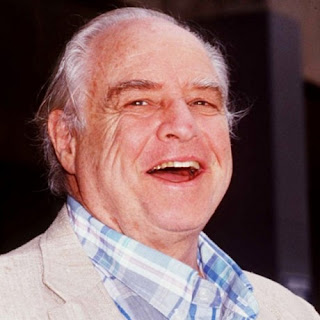 When I don't read a book, which happens quite a lot, it's an interesting process. I guess you can say I connect the dots. I keep coming around to the same parts again and again. By the end of it, I know almost nothing about my subject matter.

Having been a book reviewer for approximately one billion years, I got myself into this habit of Reading Critically. Kind of like fucking critically, when you think about it. I had lost all the pleasure. Wrestling around with this beached whale of a book, NOT reading it, is a guilty gratification.

Nobody cares what I think about it anyway, which is good. Frankly I think Manso could've cut about 850 pages out of it. A judicious little trim. 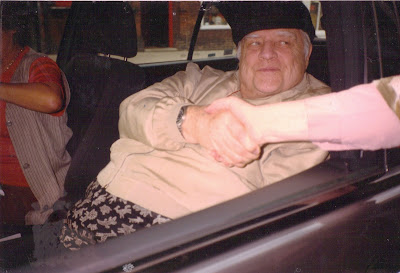 Of course there are a million stories, many of them pretty unsavory. But my favorite anecdote (and I'm going to have to transcribe this out of the book, which I hate, and I can't even use my little paper-holding frame because it would fall apart from all the weight) concerns itself with Brando hanging upside-down.

"Marlon, in one of his frequent attempts at losing weight, decided to try the current fad of hanging from the ceiling. He had already purchased a rotating hoop-frame device and special hooked boots, but because of his girth, he found that he was unable to flip himself over in the frame. He sent Papke and two other assistants out to the garage for a winch that had been mounted on his truck, then had them bolt it to the ceiling of his bathroom.

After six hours had been spent locating the jousts in the ceiling and
setting up a twelve-volt power supply for an on/off switch, the homemade apparatus was in place and the mounting had been tested. 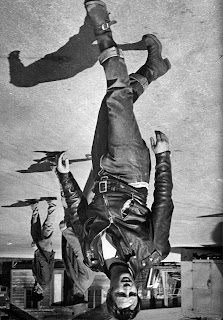 Soon, using the shoes from the discarded store-bought machine, Marlon was hanging in the air. A new problem quickly became apparent, though. "He was hanging head down," Papke explained, "and because of his weight, the blubber started to roll forward, almost choking him. He was coughing and muttering, unable to speak."

They immediately lowered him to the floor. Brando, however, was determined to stretch, and the solution he proposed was to try to use the winch and frame horizontally. The assistants fixed another heavy screw eye into the wall of the bathroom opposite the doorway, and once again, Marlon readied himself." 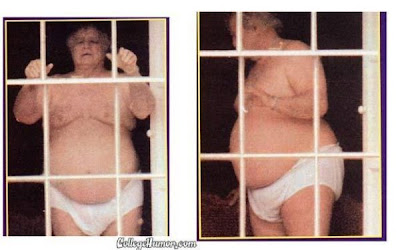 For what? Whale-stretching time? Why would anyone that fat want to hang upside-down anyway and how could it possibly help him lose weight? Maybe none of it even happened. The book begins with a long quote by Primo Levi about how most writers are bullshitters, making half the stuff up or whatever. Maybe he stretched way out about a mile thin and then snapped back like an elastic band. Maybe he turned into Rubber Man, or a giant condom, or Gumby. And who's this Papke? Sounds like a Hungarian dish to me, or half of one.

I won't be able to sleep tonight, with this vision of a 380-pound man being dragged up to his bathroom ceiling with a winch.

Posted by Margaret Gunning at 10:26 PM No comments:

I coulda had class: gifs from On the Waterfront

"Things are looking up on the docks!"

"You wanna know my philosophy of life? Do it to them before they do it to you."

"Shut up about that conscience!"

Posted by Margaret Gunning at 1:19 PM No comments:

Email ThisBlogThis!Share to TwitterShare to FacebookShare to Pinterest
Labels: gifs, gifs from On the Waterfront, gifs of Marlon Brando, gifs of movie actors, gifs of screen legends

Oh boy, Marlon Brando dancing in tight pants. I wouldn't even be on this subject at all today, were it not for Turner Classics and their insidious habit of showing movies that drag back whole chunks of your emotional history.

I don't want to think about this even now, because for a while there the musical score of this movie haunted me every damn minute, to the point that I had to purposely force myself to remember the William Tell Overture to drown it out.  The movie is On the Waterfront, and every few years I watch it, almost against my will. It's the movie for my life, and every time I see it I tell myself, "THIS time I won't cry. I know what's going to happen. I won't get caught up in it."

"This" time, I sobbed my guts out and didn't even know why, any more than I'd known all the other times. It had embedded itself in me: or has it ever NOT been embedded in me since the first time I saw it? 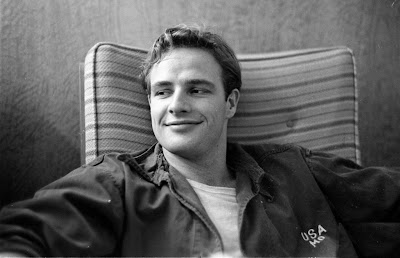 I was thirteen years old and "sleeping in the den", a special treat: I got to sleep on a creaky, lumpy pull-out sofa with brutal cold hardware on the sides, so I could stay up and watch a movie (or movies, depending on how long I could stay awake). This movie, this On the Waterfront just came on, and after a while my brother Arthur came in from wherever he'd been - out drinking, I think. We watched it together, and I recorded the sound track on an old Webcor reel-to-reel.

Is this why it became so embedded in my brain stem, because I listened to the sound track so many times? Is this why the glorious, ferocious Leonard Bernstein score still thunders through my brain whether I want it to or not? Or is it the fact that Arthur died in 1980, and this is one of the few fragments I have left of him? I remember we did a highly disrespectful satire of the movie, the two of us playing all the roles (I was Edie, Charlie and the priest) and recorded it on the Webcor. But I am sure it wasn't just a sendup. The movie had gotten to both of us. 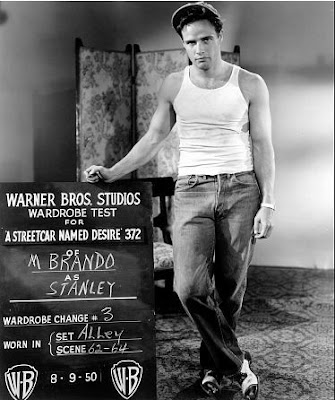 I don't want to go into the details of the story, except to say it's the classic good-versus-evil struggle, integrity versus an almost cartoonish oppression. Brando plays Terry Malloy, a washed-up prizefighter ("I coulda had class! I coulda been a contend-ah! I coulda been somebody.") singlehandedly taking on savagely corrupt waterfront powerbrokers and winning. But not before a lot of compelling scenes with the virginal Eva Marie Saint, and a thunderous performance by Karl Malden as a renegade priest. "Boys: this IS my church!"

Somehow it comes around again, mysteriously, like a season. I've forced friends of mine to watch it with me over the years just to show them how it's the best movie ever made, even though I am sure they don't get it ("Look, look, there's a cross on the roof! An unintential cross! It means Charlie is going to be sacrificed, you know?"). Instead of losing intensity, as it probably should, its power seems to accumulate so that it now has the capacity to completely mow me down. 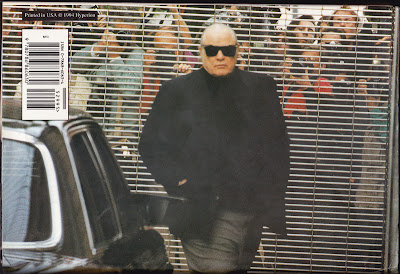 At thirteen, I found myself in a Marlon Brando phase. On the Waterfront came out in 1954, so it was as old as I was, and it was a little disappointing to discover that Brando was not the same man. Already he had turned very strange, had started to lose his astonishing good looks and charisma and gain a distressing amount of weight around his middle (later to transform him into a literal square, broad as he was long). He was hanging around with all these Tahitian women and having a whole lot of children with them. All this I had to find out at the library, in old books. Some movie mags had scandalous stories about him. But that was nothing to what came later.

I don't know what it is about the brilliantly talented, why they are so fucked up and so spookily gifted at throwing all their advantages away. For decades, actors and directors thought it was the greatest opportunity in the world to work with Brando, even as his reputation for being completely unprofessional and even nasty to his fellow actors had become legendary. That, and his alarming tendency to split his pants when he bent over. In a 1000-page biography by Peter Manso which is almost as heavy as Brando himself, one wardrobe mistress claimed that she had made him seventeen pairs of pants for a single movie, One-Eyed Jacks. I'm not buying it, but you get the idea. 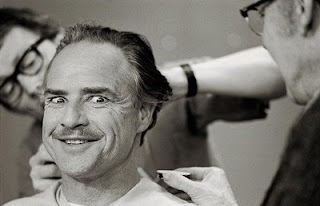 When I recently watched On the Waterfront again, when I saw Brando eerily foreshadowing his own decline playing the slouching, seedy ex-boxer oppressed by forces he didn't understand, I saw an almost religious surrender, a willingness or even a need to lay open his own chest: "They got Charlie," he murmurs when he finds his brother (crucifixion-like!) hanging dead on a longshoreman's hook. It's more of a statement than a lament. Then comes a muted wail of grief: "I'm gonna take it out on their skulls." No other actor in history could pronounce a line like that, not even aware of what he was doing. When technique dissolves and an actor so astonishingly "becomes", there is simply no name for it.

Brando died a number of years ago, a huge man holed up in a mansion on Mulholland Drive in Los Angeles, Citizen Kane-like in his isolation and bizarre self-destructive habits. Supposedly on a strict diet, he bribed delivery boys from McDonalds to throw bags of burgers over the wall of his fortress-like home. He went a strange kind of crazy, and I won't even get into the horrors of his family, the madness, the murder, craziness and death of every kind. He even told one interviewer that he had nine children, when in truth he barely had eight (some of them the stepchildren of divorce). And at least one of them was sired with his Mexican maid.

But there is something about the cab scene in On the Waterfront - the scene sometimes called the most compelling and perfect in all of movie history - the way his brother Charlie pulls the gun on him, and Brando's response - almost gently pushing the barrel of the gun away from him and breathing in a kind of tender disbelief: "Wow, Charlie." In that moment he realizes (and somehow spookily telegraphs to us) that his brother is already dead, or, perhaps, has never really been alive.

We will never understand such genius and its frightening, illuminating, appalling ways.