The Origin of Tweetspeak (From the Gospel according to Wikipedia):

I cannot doubt that language owes its origin to the imitation and modification, aided by signs and gestures, of various natural sounds, the voices of other animals, and man’s own instinctive cries.


— Charles Darwin, 1871. The Descent of Man, and Selection in Relation to Sex. 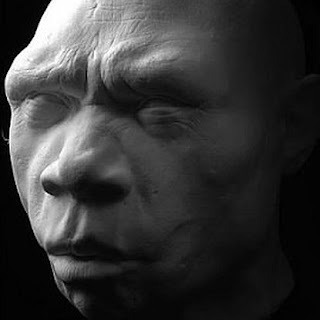 Most scholars today consider all such theories not so much wrong—they occasionally offer peripheral insights—as comically naïve and irrelevant. The problem with these theories is that they are so narrowly mechanistic. They assume that once our ancestors had stumbled upon the appropriate ingenious mechanism for linking sounds with meanings, language automatically evolved and changed.

Class, tell me what's wrong with this theory of language development. Isn't it obvious? It's full of DOO-DOO!

But somebody got away with it. Like Piltdown Man, Muller's theories hung around for quite a long time until someone cried "Bullshit!".

I took a few anthropology classes in the '90s. With the massive number of finds and genetic breakthroughs since then, my knowledge might be classified as Stone Age. But it did get me permanently interested.

In particular, it got me interested in language, how it developed, and (the big question in my mind) WHAT WAS THE FIRST WORD. 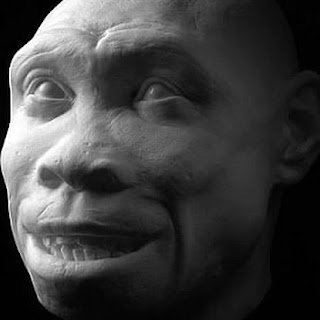 It's a meaningless question in most ways: surely language, which probably did begin as a series of primitive but meaningful sounds, developed differently in each little region where these scary suckers lived, worked and copulated. So Ugg from Blugg probably couldn't communicate very well with Alley Oop from Valley Bloop.

But somehow. . . Somehow we ended up with these hundreds, maybe thousands of meaningful ways of conveying information to each other.

It's one of those unfathomable mysteries that must have happened somehow, or I wouldn't be sitting here writing profundities about the evolution of language on a perfectly good Saturday morning when I should be at the mall taking advantage of the post-Christmas frenzy of buying iPads and ePods.

So what was the first word? What did those primitive geeks feel compelled to name? There's the inevitable theory that language developed due to that sacred ritual, "the hunt". If men hadn't been out there trying to bring down prehistoric megafauna with sticks and stones, they wouldn't have had to develop that elaborate system of shouting "Get out of the way, asshole, a giant rhino is coming!", which ultimately saved humanity from total extinction. 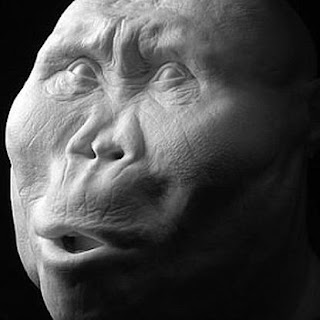 When I studied anthropology, and I will admit that my knowledge is pretty creaky, I learned that "the hunt"  was prestigious and, if successful, resulted in a giant feast, a community hoo-ha that went on for days. It was considered remarkable mostly due to the fact that it happened maybe twice a year.

Twice a year?! So how did these giant proto-humans stay alive in the meantime? The women, stuck in home base because they had to keep the line going, constantly gathered everything edible that they could lay their simian hands on. Nuts, roots, berries, even the occasional fatal toadstool.

THIS was the food supply that made evolution possible. We won't get into the trivial fact that along the way, women were smart enough to notice that they could make certaint plants grow where they wanted. Voila - agriculture!

But something happened that forever bent anthropology in the direction of male supremacy. Those tools, those crappy blades and stone hand-axes  so primitive that to me they just look like chunks of rock, survived the millennia and are now prized as "man's first technology".

The leather slings that the women used to collect the crucial day-to-day food supply rotted away and disappeared.

Being a woman is a thankless task. 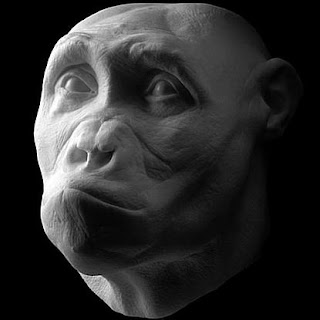 Aside from being baby factories, we disappeared from history, except of course for our purses. Ever wondered why you can't stand to be parted from your purse, and why it feels so totally devastating when you lose it?

This post has wandered way off-course. We were talking about the development of language, of "first words", what early humans felt compelled to name.

Did they name themselves first, and each other? Did it become convenient to number their children: Number One Son, etc. ? And speaking of, when did the concept of numbers become comprehensible to them?

The theories swirling around this mystery include the idea that humans sang before they spoke: that is, they chanted around the fire at night, thumping on ibex skins and blowing into hollow sticks. Gradually the chants took on significance: in other words, somebody invented lyrics.

I like this one better:  Babies develop language in a certain set way based on their ability to hear and comprehend what adults are saying around them. They seem to get it in stages that unfold predictably. Babbling - the "bababababa" or "dadadadada" that Muller forgot to include - comes first (with "mama" a distant second). Probably because you don't have to do much to produce the sound.

But somehow, slowly, magically, real words pop through, even if pronounced in the most unusual fashion. My son was one of those kids who needed to be translated for a couple of years. "Chicken" came out "could-a". Milk was "woak". When his little sister Shannon came home from the hospital, he would toddle around saying, "Mummy Sheeta."

Gradually real words come into focus, but it is only then that they're strung together in a meaningful way. My son's first sentence was, "Find boy." (He wanted to play with his friend.) Tarzanic though it was, I was thrilled. He had taken a giant leap with those two one-syllable words.

How does this happen? Grammar is practically absorbed through the skin. No one actually "teaches" a child to talk. Could this be the way it happened with humans?  From ba-ba-ba-ba to "get your stinking paws off me, you damn dirty ape"?

There was this story - I'm digressing again, I don't know what's the matter with me today - about a feral child who had been literally locked away for years and years. When she emerged, deformed from being tied to a potty chair, she had no verbal language at all.

This was in the '60s, so scientists practically put her in a wire cage for observation. As if she had fallen into a cult, they immediately renamed her Genie, as in "that magical creature who emerges out of a bottle" (presumably meaning her captivity). What scares me so much is that they saw nothing wrong with any of this and even felt it was in her best interests. Soon she was being shunted from one foster home to another, so that it was impossible for her to feel any emotional attachment or security at all. 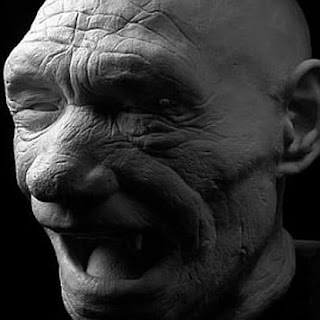 Everyone believed that the thresshold for learning language was around three years of age, but this child was thirteen. Though her parents had thought she was  severely retarded, she still had enough ruins of intelligence to pick up the names of things.

She knew how to say chair, tree, spoon, and almost seemed to know what they meant, even if her words were nearly unintelligible. Soon she had this massive vocabulary of something like 200 words. She was a success! She had evolved language all by herself, proving that there was no threshhold for learning how to speak, that you could pick it up at age ten or forty or whenever you wanted.

When someone comes along and provides evidence to prove a scientist's pet theory, it usually goes over very big. You hardly even have to twist the facts.

But predictably, it didn't work, mainly because the whole case was handled with jaw-dropping insensitivity. Because the novelty had worn off and no one knew what to do with her, "Genie" was returned to her biological mother, the one who had stood watching while her father lashed her to a toilet for thirteen years. She was only taken away again when - surprise! - her mother beat the hell out of her for vomiting.

The only reason her father was absent from this scene was that he had committed suicide, leaving a note that said, "The world does not understand."

Anyway, to wrap up this impossibly desolate story, the little girl's language began to fade and fall apart. These brilliant scientists one day woke up to their tinny little intellectual alarm clocks to realize that saying individual words isn't the same as speech. Isn't the same as language. Their little test subject had failed them, so she was tossed aside, no longer of any use to them. After research funding dried up, her loving foster parents abandoned her like an unwanted dog. Eventually she was placed in a nursing home where she mysteriously became "non-verbal" once again.

All I'm saying is, these clever proto-humans must have broken that single-word barrier, must have leapt from individual names and words to some sort of primitive grammar: meaningful ways of stringing words together that included nouns and verbs and all that kind-a stuff. Pointing and grunting was no longer enough.

Language is like music. Randomly tapping on a xylophone isn't it. Even picking out a simple tune doesn't cut it either. There is so much more to it than that. 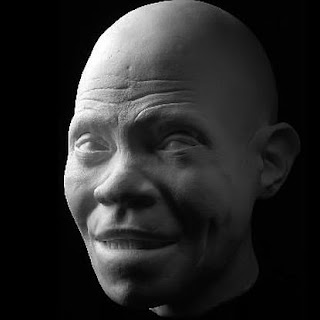 There are other factors - and God help me, I will soon run out of factors before I go have breakfast. Some of these clever anthropologists say they can determine language development by looking at a skull. Something about the opening into the larynx. But how did THAT get there? How did it evolve, and how long did it take?

It's chicken and egg.

The human brain, which by now is so fucked-up that it's at the point of no return, is permanently wired for language: the template is there, waiting for the information to be downloaded. Or else waiting for a Twitter account and a Smartphone.

As gadgets slowly, awfully take the place of literacy and individual thought, as language is steadily eroded by truncated spelling and twisted or non-existent grammar, communication will eventually devolve. In fact, we're already devolving, with Tweetspeak now considered a valid human language. Atrocious spellings that remind me of I taught I taw a puddy tat (speaking of tweets) will become the norm. If I came back in a hundred years, my hair would stand on end from trying to understand the degenerated blather that passes for language.

It's coming, folks. In fact, it's already here.  And this time, it's too late to start all over again.
Posted by Margaret Gunning at 11:28 AM 4 comments: