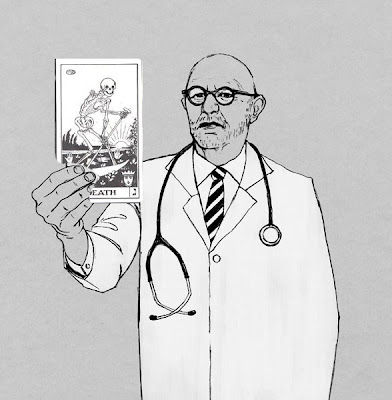 I don’t remember where I heard this – maybe in Moscow on the Hudson, one of Robin Williams’ earlier films, where he had not yet calcified into the parody of himself he is now. But it was a reference to being “in the lineup to wait for the lineup”. Do we think this only applies to the fucked-up Soviet system of inefficient callousness?


Substitute “medical” for “Soviet”, and you’re almost there.

I’ve been waiting to hear back from my doctor. I went in three weeks ago to address some alarming symptoms, the kind of thing that medical articles and TV doctors say you should follow up on immediately. I need a certain nasty-sounding test. It’s an up-the-ass sort of test that I don’t look forward to, a Roto-Rooter boring into my colon. I bailed on one of these tests a year or so ago, just couldn’t make it. This time there’s a serious reason for taking it, and I’m hearing nothing.

Maybe three weeks on the waiting list for the waiting list isn’t long, who knows. I have phoned twice to check up on it, and both times was hand-pattingly gotten rid of. In the nicest, we-know-who-you-are-you-hypochondriacal-old-bat way. I didn’t think I had quite reached old-battitude yet, but I guess it’s a matter of degree. I don’t think of myself as a hypochondriac, but I once was told I was a “psycho-chondriac” because I dared to complain about clinical depression. Nowadays, they’d get down my neck if I didn’t complain. Don’t you know that’s a serious condition? Don’t you care about your health?

You don’t dare listen to medical specialists, especially not on TV where the more ludicrous the claim the better, because it “makes good television”. Soon the theory will be completely discarded, and of course anyone who goes to their doctor to have it checked out (as the medical “expert” never fails to insist that you should do) is looked at with that blank, incredulous, “what-the-fuck-are-you-talking-about-anyway” look.

And doctors also say “whatever you do, DON’T go on the internet about this.” I can see why, I really can. Lots of internet sites about health verge on black magic. Wave a dead cat over your head at , and you’ll never have a heart attack again. Eat certain things, ingest herbs, roots, whatever they have for sale at an outrageous price, and your cancer will vanish and never come back.

But why can’t we get some basic information in this information age? Are the doctors, overloaded and harried and eager to install a revolving door in the office so they can yell “NEXT” every five minutes or so, any more useful for our enlightenment? Especially since they all have different philosophies and insist that theirs is the One True Religion. 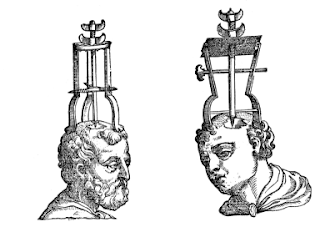 I’ve noticed something else. My husband collapsed on the floor about a year and a half ago, and no one knew why. It was alarming to see him surrounded by police and ambulance attendants and paramedics. I had to stand back, way back, while they worked on my grey-looking life partner. Then came the barrage of tests. I don’t know how many tests, but he had to see many specialists, each of whom took a different part of the body and studied it.

Reminds me of that old story about the blind men and the elephant. It's a big piece of leather. No, it’s a thing like a hunk of rope. No, it’s a big chunk of ivory. No, it’s a – look out! It’s about to charge! 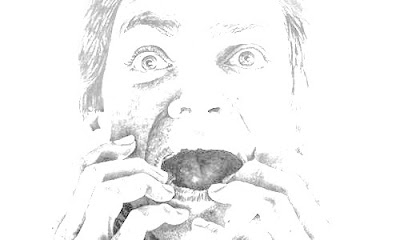 I do have a point. None of these specialists ever talk to each other or even send reports to one another. It is as if Bill had a separate heart, nervous system, brain, bladder, prostate, etc., component parts that were assembled like Lego or an old Meccano set. They weren’t parts of a person because these specialists are not concerned with a “person”. They are concerned with a piece of tissue, a hunk of organ. Never is the circulatory system connected to the heart, that’s insane! Nor is brain function tied to the nervous system. How absurd. They’re separate systems.

Frightening, is what it is. There is no consultation between experts, just conclusions, usually that everything is just fine and the patient is full of shit and whining for nothing. 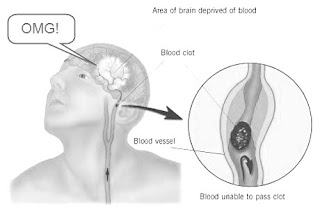 Sometimes I want to bring back the days of the family doctor, like the wheezing old guy who carried a black bag into our house when I had the measles or the whooping cough. For a while after my first grandchild was born, there were three generations of my family seeing one physician. I’d had my doctor for nearly 15 years and recommended her to my daughter, who took her on, then started taking her infant daughter in to see her. It was an interesting throwback to a different time that is now completely obsolete.

Then she retired, and that was over and done. A child nowadays would have to go to a “pediatric specialist”, and if she was acting up a bit and stamping her foot and not paying much attention to parental commands, she’d be diagnosed autistic. ADD is now old-fashioned and has been pretty much phased out, like personality disorders in adults. The autism “spectrum” is the thing now, you see.  And by the way: I have a drug for that. 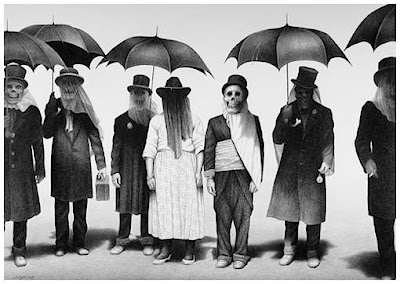 Oh, don’t get me going on psychiatric stuff, the way fads and fashions seem to dictate everything. Depressed women used to be given Valium, a highly addictive tranquillizer, which was about as sensible as taking a crowbar to someone with a concussion. Gay men were sick. They couldn’t help it, they were “immature” and their mothers were too dominant and their fathers were too weak. If they tried really hard, they might pass for hetero. But for the most part homosexuality was seen as a permanent mental illness, a serious one that disrupted the chance for a “normal” life.

For every action, there is an equal and opposite reaction. Simple physics. So now gay people – especially gay men in drag – prance around in pride parades, flaunting their “outness”. And we all smile, some of us a bit tightly, not daring to say we find the whole thing a bit silly, if not extreme. “Why aren’t there any heterosexual pride parades?” one unfortunate local politician once muttered, only to have so many bricks thrown at her that she never spoke again. 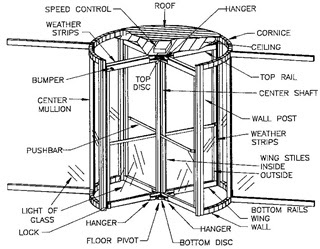 I’m not for going back to the barbaric model of “diagnosing” sexual orientation. But I don’t see psychiatric patients prancing around in parades celebrating the fact that they’re “out”.  They’re afraid, that’s why. Their condition is still very much medicalized, marginalized and stigmatized. There is no flexibility here, no individual definition of “normal”. You’re either a fuckup or you’re not. And if you’re not readily diagnosable, if you don’t fit any of the known (or should I say current/trendy) psychiatric categories, there will be hell to pay. You may even be told you’re untreatable and your condition is hopeless.

Do I sound a bit cynical about medicine? I wouldn’t go back to the days when no one even spoke the word cancer, or people in psychiatric distress were “put away”, often for life. (By the way, are you wondering now why I even mention psychiatric illness, when it obviously has nothing to do with “real” illness, “physical” illness that takes place in the body? Psychiatric illness takes place three feet above your head in a little white cloud with a nasty little man in it who spits on you every so often.)  I wouldn’t go back, but I couldn’t anyway, could I? There is no going back. 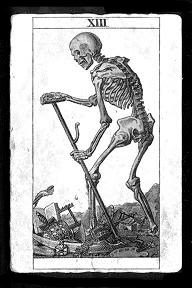 So I wait. If I do have cancer, which is extremely unlikely, then it is bubbling and festering away inside me even as we speak. It may be half a year before they can even tell, because I am waiting to see how long I will be waiting.

I’d like to see a horse doctor, please. If a horse has colic, they shove a big rubber hose into its rectum and blow a stream of warm water in it until the obstruction pops out. Sounds like a good idea to me. 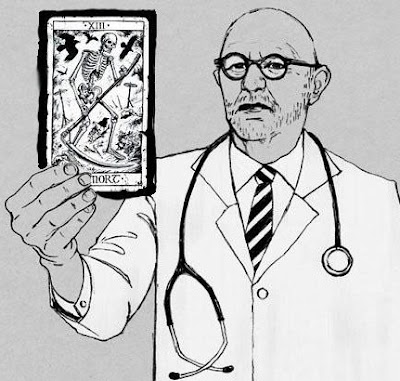