Being of a sensitive (morbid?) nature, when I first heard this, I freaked.

I freaked because it just sounded so dang-blasted weird.

As a kid, this would've scared me into my bedroom for a month. Fortunately I'm not a kid, but as with everyone, a little dotted-line ghost-kid lives inside of me and was scared half to death.

This is a whale (and for some reason this strikes me as "fishy": he died five years ago, and for some reason he's being called a "white whale" when he sure looks like a beluga to me) that somehow was able to imitate patterns of human speech. Not actual words, unless "lillgadillgawawwllyagawllwwlwlyawggldlgalyylga - PHHHT!" qualifies as actual words.

Still, there's something about those sounds. When I saw it on TV - and I will not bore you with all the scientific bumph that surrounded this 15-second clip, cuzzadafact that nobody cares about all that shit anyway, let's just get to the good part - the explanation is that this captive whale, who was at least 30 years old, was accustomed to hearing a man speak to him from underwater. And yes, those sounds do sort of resemble the distorted shouting of someone, a male voice, trying to make himself heard. The pitch of it is several octaves lower than the usual "wwweeeeeeeeeeeeeet!" (sorry, this isn't phonetically reproduceable) of most cetaceans, like the adorable screeching scene in Splash when Darryl Hannah breaks all the TV screens in Bloomingdale's. 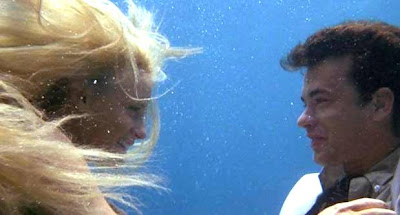 But one wonders. Right about now everyone would be clamoring to hear more from this whale, to ask him about the last Presidential debate or to comment on Ann Romney's age-appropriate swimsuit and whether or not she wore Mormon "garmies" underneath.

But no, we can't do that, because this whale is DEAD: it died a long time ago, and all we have is this weird recording and this scientist's claim that he made those eerie, almost-human-speechlike sounds.

They could easily have been faked. Just stick
your head in a goldfish bowl and go "lillgadillgawawwllyagawllwwlwlyawggldlgalyylga - PHHHT!"  In fact, that pop-culture Supreme Court known as YouTube seems to have voted against the veracity of this phenomenon. Someone compared it to their mother-in-law, others to a cab driver in Dublin or gargling with Listerene.

I don't know what to think. I want to believe; I want this to be real, even though it freaks the fuck out of me.  I am reminded of Willie, the Whale who Wanted to Sing at the Met, a 78 r. p. m. record from my childhood (and now you know how old I am, as if you cared) based on a grotesque Disney animated featurette about a whale who sang "Grand Opera" at "the Met" (presumably, the Metropolitan Opera Company in New York). 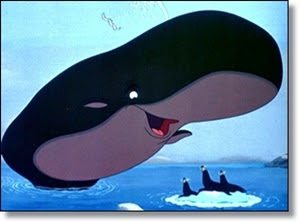 I had no idea what the Met was, and as usual nobody explained it to me. The video is available on YouTube, but I won't post it here because Willie is ghastly, resembling a giant foam rubber toaster with a tiny Clutch Cargo mouth halfway down his stomach. A more awkward, unappealing character was never created by Disney or anyone else, not even Chuck Jones when he was off his lithium.  Why not a beluga (sorry, "white") whale with his mouth in the normal place? Even something like the huge majestic whale in Pinocchio would have been preferable, though perhaps he was seen as not friendly enough.

The Met, as far as I was concerned, was the Metropolitan department store in downtown Chatham (then referred to as a "dime store" - Lord, how things have changed), one of my favorite places because they had a lunch counter and cheap things like marbles and plastic skipping ropes, and you could even buy pets. Turtles that came with round plastic bowls with spiral-shaped ramps in them and a little plastic palm tree and disgusting food in a little tin and everything. And budgies: I finally wore my Mum down about a budgie, though it took a long time, and one tragic day when everyone was out of the house, the bird somehow got out of the cage and the cat ate it.

No kidding: we found a pile of feathers on the floor and a single, pink, scaly little foot.

I spent my childhood in confusion over such things because I was afraid to ask any questions. My sister was thirteen years older than me, and I believed I was supposed to be her intellectual equal and understand Goethe and Schiller and Bertolt Brecht.

There is another association with articulate animals: the Children's Record Guild recording of a very strange, adulterated version of Puss in Boots. We had a number of these recordings, which originally came through the mail as a sort of record-of-the-month subscription. But this set of maybe thirty or forty records was bequeathed to us by someone who didn't want them anymore. Obviously they hadn't been played much: there was hardly a scratch on them. We soon took care of that.


Through the wonders of the internet, I've found some of these records and listened to them again for the first time in more than ("lillgadillgawawwllyagawllwwlwlyawggldlgalyylga - PHHHT!")  years. The Travels of Babar, Slow Joe, Build Me a House, Robin Hood, etc. I even found a bizarre version of Pinocchio with Paul Winchell and Jerry Mahoney which we played half to death (though my recent posting about the hellscape of Winchell-Mahoney Time expresses my abhorrence of that particular entertainer, who always struck me as a son-of-a-bitch).

These reborn-through-the-internet kiddie records are miraculously pristine, with no World War III going on in the background. Someone must have preserved them in a vault somewhere, or found some way to remove all the scratches. Anyway, the one I most happily happened upon was Puss in Boots, the strangest re-imagining of the story I've ever heard. Puss, a cheeky little feline in seven-league boots, adopts this person named John and somehow renders him into a Prince by wangling an audience with the King. Sort of like that. But first of all, John is totally gobsmacked by the fact that THIS CAT CAN TALK!

Here is the Ballad of Puss, which we used to sing to each other endlessly. I just listened to it again (I had to convert an unplayable MP4 file into an MP3 for this, which took some doing), and made an effort to transcribe it: for you, precious reader, the gardenia that blooms in the innermost Eden of my heart, deserve to share it with me today.

When I was just a teeny-weeny kitty
Everyone told me that I looked so pretty
They said, 'beautiful eyes'
They said, 'lovely fur'
But all I could answer was 'meoowwww' or "purrrrrr"

My coat was black, my eyes of course were yellow
People always said 'what a charming fellow'
I wanted to thank them, but I did not know how
For all I could answer was 'purr' or 'meow'

Then one day as I was lying sleeping
A great idea into my head came creeping
A pussy cat that had learned to say 'meow'
Could say just 'me', by leaving off the 'ow!'

So I said me, me, me, me, me,
Then it was plain as could be
From me to he to she to we
Was just as simple as it could be
I practiced daily for a week
And that is how I learned to speak!

(Here a verse is omitted, I can't keep up) 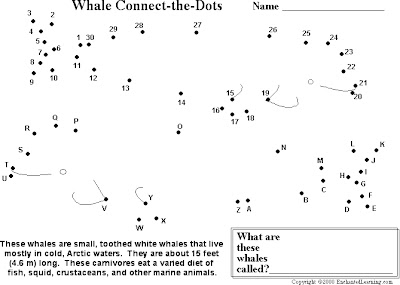 So if a cat can learn to talk, and a whale can sing at the Met, along with all those turtles and budgies and things, why can't a beluga - or is it a "white" whale, which I thought was something entirely different - go
"lillgadillgawawwllyagawllwwlwlyawggldlgalyylga - PHHHT!"

When a whale that's been dead for five years shows up in the headlines, anything is possible.

Posted by Margaret Gunning at 9:21 AM 3 comments: