I keep noodling around YouTube, as is my fashion, and finding more and more. His classical playing is nothing short of amazing, with a dexterity and fierceness that rivals any other concert pianist of his day. He generates excitement, playing just a hair's breadth ahead of the beat in a way that conveys urgency. The piece gallops along like a racehorse.

Some of the YouTube clips are simply bizarre, like that late-night talk show he hosted that lasted half an hour, minus commercials. I don' t think the network trusted him to go any longer. Most of what he said was a sort of stream-of-consciousness, completely unpredictable and even indecipherable.  On shows like Steve Allen, the quips were self-deprecating, fast and funny, but he had a weird flat delivery, almost appeared to be reading them off a card. Without Allen to prompt him, I doubt if he would have remembered any of it.

I wonder what he was really like. I wonder if you could talk to him. I want to trade mental hospital stories with him, just to see what he says. I want to know what drove him, what it was like growing up, being Oscar Levant as a boy. 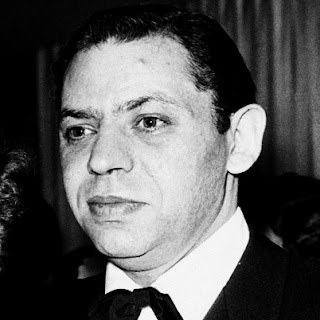 A weird thing keeps happening. I like to fool around and adulterate photos (hmm, that sounded funny for a minute), which are all in the public domain so don't get on my case about it. Levant lived in the era of black and white, and the photos, while stylish, often aren't very gratifying. You can try to reverse the image into a negative, and play around with exposure and contrast, and that's about it. But pictures of Oscar - they do this strange thing. 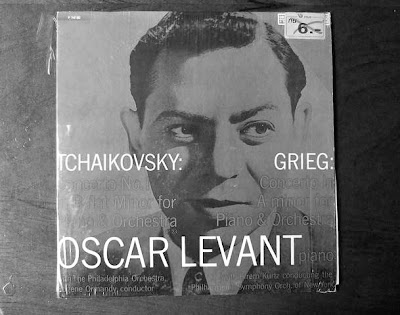 A while ago I posted twelve variations on a small, very dark shot of him playing the piano in a concert hall. I don't know what happened, but as I played around with them, color began to explode out of the darkness. They somehow came out painterly, Chagalls and Van Goghs and even a few dark, treacly Old Masters. Some looked like Christmas lights, some were aqua and yellow and pink, and - hell, this just wasn't possible! 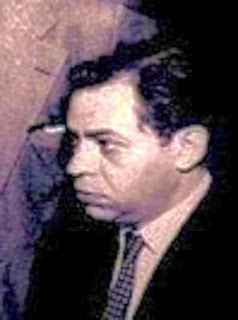 Levant had a gangster look about him, those double-breasted pinstriped suits and the cigarette dangling from the Edward G. Robinson-esque lips. I don't know where it came from, because I don't think he was tough: as W. C. Fields used to say, "I can lick my weight in wildflowers."

This shot, cropped out of a larger one like most of his photos (Levant was the eternal sidekick, never quite a full-fledged star) is more subdued, grainy like a remembered dream, but it produced some nice evening purples and dull gold highlights. Like Levant, it has its own strange kind of beauty, on the shadow side of the street. 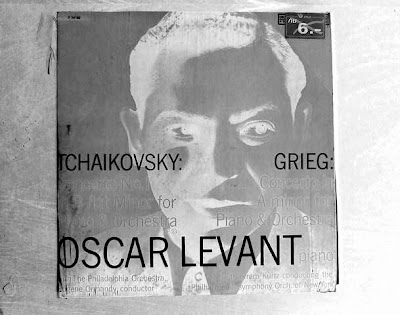