Things to do with a dead cat

It's called Glen or Glenda (or: I Changed My Sex, or:  I Made an Unbelievably Bad Movie), and purports to explain to the audience why some men just can't help borrowing from their girl friends' wardrobes. Especially pink angora sweaters (the climactic moment at 54:25). 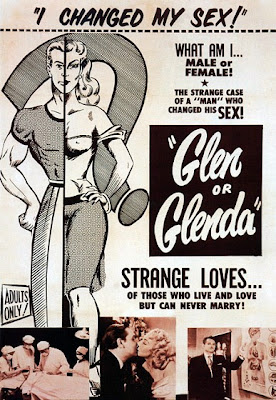 Though there are lots of other memorable moments. For reasons no one understands, director Ed Wood (the subject of a biopic called Ed Wood, starring. . . no, not Ed Wood, who died of alcoholism in the '70s, but the far-dishier Johnny Depp) liked to insert several elements into his films:

- stock footage (there are at least 15 minutes of shots of busy streets, hospitals, war zones, munitions factories and stuff like that);

-  long, pointless monologues by washed-up actors like Bela Lugosi (who, inexplicably, gives a running commentary from a haunted house);

-  and, the thing he did best, soft-core sleaze. 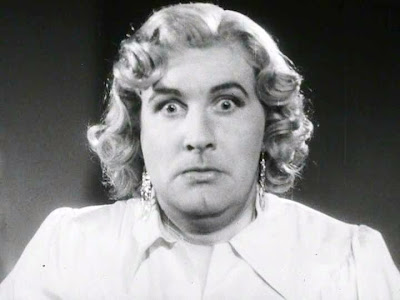 This has nothing to do with the main topic of transvestites and transsexuals, here conflated into the same thing, though they insist Glen is NOT a homosexual: dear God, who would want to be one of THOSE? The film can't decide if it's fer it or agin it: i.e. tolerant of men who like to cross-dress, or harshly judgemental. Glen (played by Wood, whose own florid cross-dressing habit went back to wearing lacy red panties under his Air Force uniform during World War II) seems to be going through the tortures of the damned, all caused by being teased as a boy for being a "sissy". Bela keeps drivelling on and on about "puppy dog tails and BIG FAT SNAILS" (not that I dislike snails: see my post of May 16/12).

But it's all so confusing.

This is I guess what this thing is all about, gender confusion and how it can drive a poor soul to suicide. Ed Wood is much better-known for Plan 9 from Outer Space, which is worth seeing just for Maila Nurmi lurching along with a waist the size of a drainpipe. I think Glen or Glenda was his first, however, made on a shoestring budget in a couple of weeks and featuring friends who'd appear on-screen if he bought them a couple of drinks. 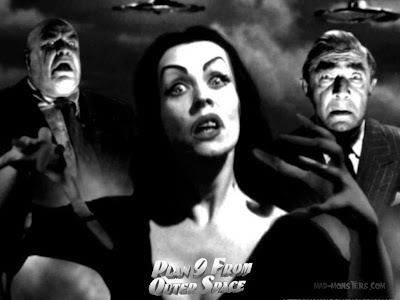 Bela Lugosi was such a wreck by then that he'd take any work to feed his drug habit, and died during the filming of Plan 9, to be replaced by Ed Wood's chiropractor covering his face with a cape.

Oh, that's enough now, just watch it already, or at least the good parts I've told you about.

http://members.shaw.ca/margaret_gunning/betterthanlife.
Posted by Margaret Gunning at 10:27 AM 8 comments: