Oh once I had a downy swan, she was so very frail
She sat upon an oyster shell and hatched me out a snail
The snail it changed into a bird, the bird to butterfly
And he who tells a bigger tale would have to tell a lie.
Sing tarry-o day, sing, autumn to May 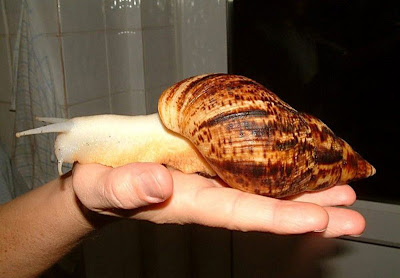 Why is my yard suddenly full of snails? I've found huge piles of them in the mornings, like a giant snail orgy, and they're all over the yards. I picked up over 200 just this morning and that's the littlest pile I've found yet!
We've also got tons of worm beds and little mushrooms popping up all over the yard and the field next to us. We've been in a drought for a while and have just had a lot of rain recently, and I know their eggs can stay for a long time, but these are tons of snails. They're not just one kind, it's the small white ones, the spiral brown ones, and even the big round ones and they're every size from baby to huge. They're not just in a garden and I can't put eggshells or copper all over my yards. These things are making slimy trails everywhere and are hanging all over the outside of my house. 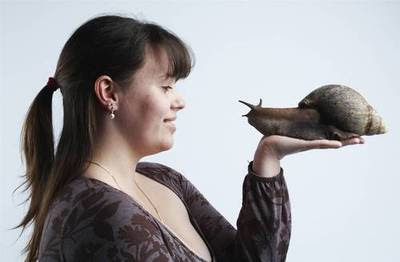 SNAILS SNAILS SNAILS. I can’t get them out of my head. Also that song about an , which is equally offensive.

I don’t know how this all connects together, although I suppose it does in the usual bass-ackwards way. I have set myself a goal for two of my grandchildren’s birthdays: since they’re fairly close together, the two will be combined into one celebration, bound to be a biggie.

Since we’re on a limited income and since they are already buried in toys they don’t particularly want, I would like to try something different. I want to make all their presents. I have become obsessed with knitting stuffed toys, and so far have had some pretty good results, along with some disasters that I gutted for their stuffing and threw away. My goal is not to buy anything for the two girls (who will be turning 5 and 7), except materials to make my knitted stuffies. 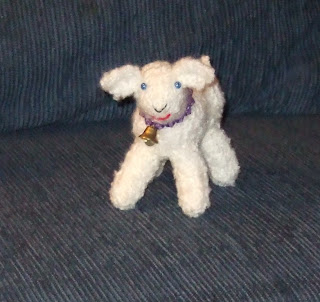 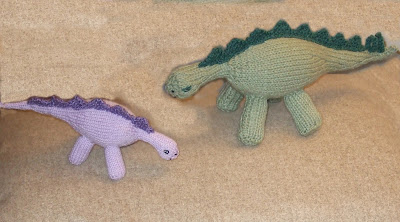 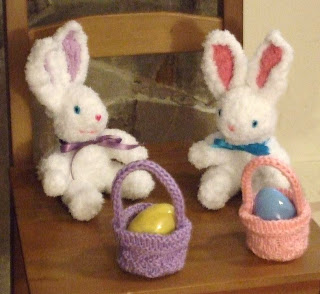 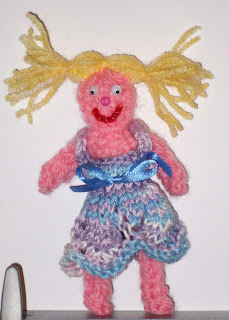 But I had to have a theme. For reasons I can’t trace back, I wanted to make a storybook (another thing I like to do for them) complete with pictures gleaned off the generous internet: a retelling of the Ugly Duckling story, in which the duckling grows up to be a beautiful. . . duck. But I decided that pictures weren’t enough: I was going to attempt to illustrate the story with stuffies. (I'm getting to the snails, I promise.)

Making the ducklings was fairly easy, using an Easter chick pattern and adapting it: Stubby, the ugly one; Wakwak, the most obnoxious of the “normal” yellow ducklings; and Tuffy, the baby swan. I did make a mature swan, but a pink one (cuzzadafact that Lauren specifically asked for one). Like many patterns I find, it had to be completely revised to make it more swanny. (How I love ya, how I love ya. Sorry.) 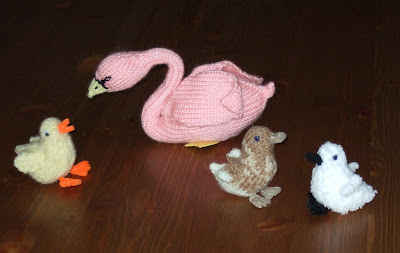 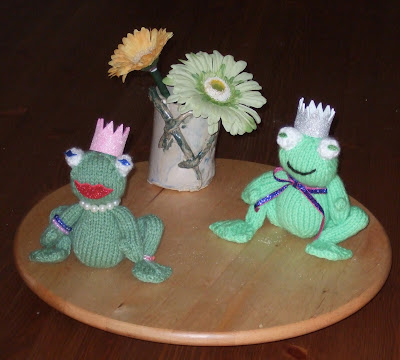 I expanded the story a bit to include a Frog King and Frog Queen, one of my more challenging patterns. (Accessories are key. The Queen is wearing a pink bead anklet.) This project is coming along well, though it’s no secret I’m obsessed, and also constantly running out to buy materials (I NEVER have the right color/quantity of yarn for what I want to do). But there’s no snail in this story, and Erica loves snails, collects them, puts them in jars, watches them, feeds them leaves, etc. She is a girl who loves creepy-crawlies.

My knitted snail pattern was, oh. It was dreadful. It looked so good, and the pattern-book said even a beginner could do it. I have been knitting for fifty years, and I am here to tell you that NO beginner could even begin this, let alone finish it. The shell went OK, but the instructions for the body were impossible to interpret. (This was from a book of knitted amigurumi, which I do not recommend.) So it was redesigning time. I came up with a sort of beanbag slug for a body, then attached the shell, hoping it would do. 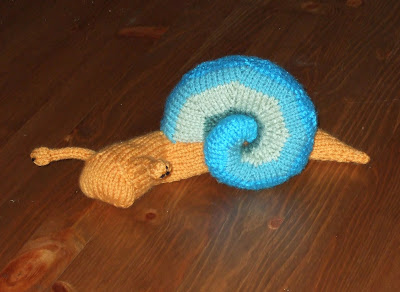 You couldn’t possibly reproduce a real snail, disgusting and slimy with its indecent eye-stalks probing ickily forwards, in any sort of textile form.  But I did the best I could. So what does any of this have to do with Donovan, or the videos I posted today?

I don’t know why his songs came into my head today. I adored him as a kid: I got stoned to Donovan for the first time in my life, and I remember hearing Wear Your Love Like Heaven feeling as if I was three feet off the ground. (Never mind that it was also used in a Yardley’s Sigh Shadow makeup ad.) 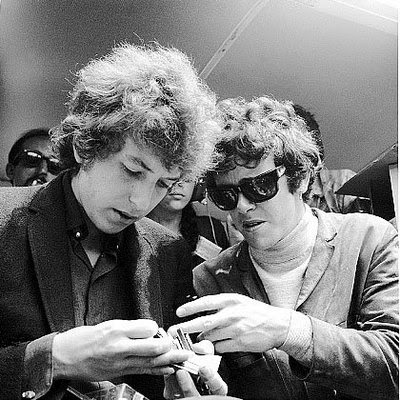 Looking back, he was a phenomenal artist: Sunshine Superman, Mellow Yellow (CONFESS: did this song inspire you to smoke banana peels?), Atlantis, Jennifer Juniper, and tons of others. His double album A Gift from a Flower to a Garden (a sappy title only the ‘60s could get away with) was chock-a-block with charming, imaginative, tender anthems to those free-and-easy times: record #1 had his more “hip”songs with arrangements and backup musicians, and the other one his wistful, guitar-only folk tunes, all self-composed.  Song of the Naturalist’s Wife began with the sound of a newborn baby crying, tugging at the viscera of every female who ever listened. 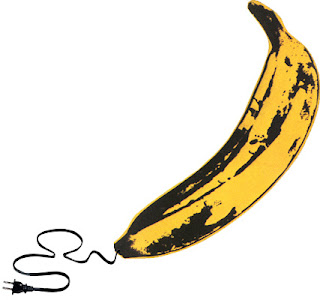 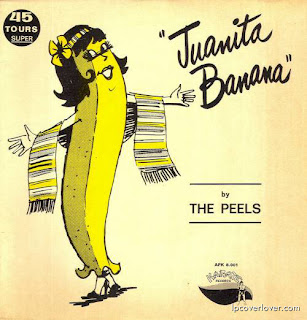 Right. Listening to these for the first time in (blllblblbltt) years gave me the strangest feeling. Some of them seemed a bit sappy, but others got me right in that twingy little place behind the breast-bone.  I had to pick one: and into my head popped his silliest, flutiest, cutest, hippest number. And there it was: Lock upon my garden gate’s a snail, that’s what it is! So it was one of those weird things.

Donovan was barely 20 years old when he became “’s answer to Bob Dylan” (which, in spite of a superficial physical resemblance, he wasn’t:  his lyrics were wispy and fey, lacking all that rage and snap and snarl). He had polio as a child (who knew?), so he walked with a limp. His son, also named Donovan, once popped up on Sex and the City. I don’t feel like finding out any more because this is already meandering on far too long. 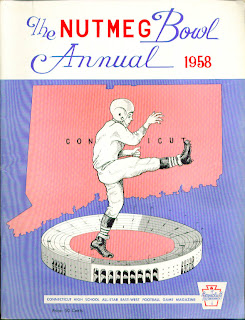 (And nutmeg. Yes, I smoked nutmeg and it was awful and later on I found out it could cause brain damage.) Snails can be cute, but for the most part they’re kind of awful. Unlike slugs, they have the decency to withdraw into shells that can be quite pretty. But the slime trails they leave can’t be defended. Peter, Paul and Mary did one of those icky-sixties songs, whimsical, that incorporated a snail. Then there is the Dear Abby of snailhood that I found about a horrible snail invasion in somebody’s yard. 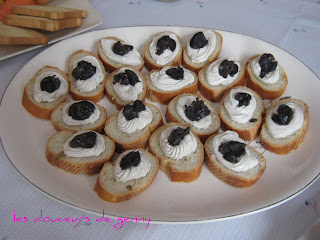 Quick! Ick! Get the snail bait!

And a not-very-fond farewell to the topic of snails. Two poems I remember so well from WTF ("where the fxxx?"), the precious-sounding original, then the parody. 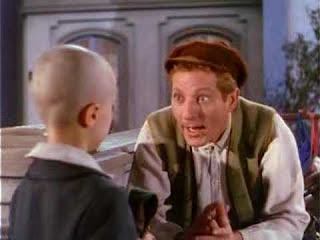 My Garden by J. A. Lindon


A garden is a lovesome thing? What rot!
Weed plot,
Scum pool,
Old pot,
Snail-shiny stool
In pieces; yet the fool
Contends that snails are not -
Not snails!  in gardens!  when the eve is cool?
Nay, but I see their trails!
’Tis very sure my garden’s full of snails!


Posted by Margaret Gunning at 9:15 AM 3 comments: