Oh yes. Oh, yes, Captain Kirk, and his noble soliloquy in perhaps my fave original Star Trek episode, Miri. The one with all the kids on that planet, you know, all by themselves coz the adults all died, and they get all gross when they hit puberty and Yeoman Rand's leg looks like a major cigarette burn. I watched it at 13, tape recording it as I usually did on our old reel-to-reel Webcor with the fan-shaped microphone. Kirk wasn't ridiculous then, he wasn't a joke, he wasn't a buffoon and to date, he had done no Loblaws commercials. Kirk was just Kirk. 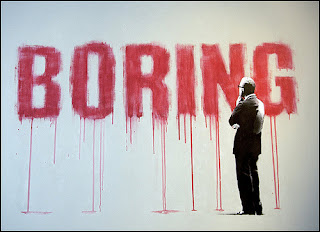 When they leave the restaurant, the blatherer will be hugely inflated with self-righteous helium for the next deadly gas attack, and the victim (for that is what it is) will be but a pale shadow of his/her former self. She will be so anemic, you'll be able to see through her. She'll have to go home and lie down for a month or two, maybe get a transfusion. 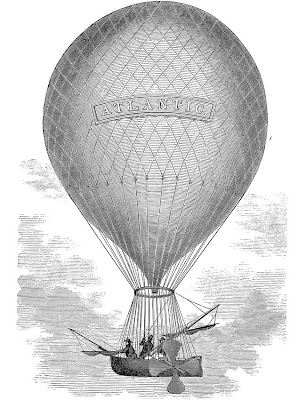 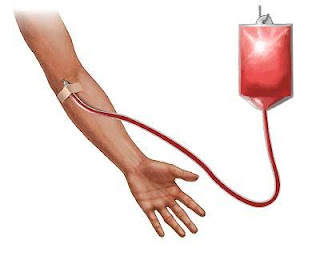 
This is not a conversation. This is a monologue. The monologuist has no idea that it isn't a conversation and in fact thinks he's a very good conversationalist, very smart and sharp. His blathering about camping equipment or the plumbing in his house or his car troubles or the asshole at work who got the promotion he should've got (or his bitch of a wife, always a favorite) strikes him as scintillating discourse sparking a lively debate, an exchange of witticisms rivalling the Algonquin Round Table in sheer witti-blah-tudinous-ness.

There is nothing to be done. Stay away, that's all I can say to you, try to stay away and not call them friends. A friend does not stick a drinking straw in your jugular vein and begin to vigorously suck. Blatha-blatha-blathata-blah.

I don't know if this codicil belongs here, but I might as well tack it on. It's the self-proclaimed expert who charges into a room full of chemo patients and bellows, "TAKE MILK THISTLE AND YOU WILL BE CURED!" The person so sure of (his or her) convictions that they force them on others as absolute, unassailable gospel truth. 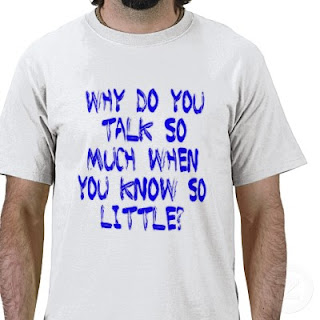 One doctor I know is a doozie. Educated, an "expert" on many things, in fact famous.

"No, you mean: I believe illness means you've repressed your emotions."

"There's no debate about this, it's simply true."

"So everybody else, everyone who believes something different from you, is completely erroneous and full of shit?"

"I didn't say that! Don't be so defensive. It's just an opinion."

"Because it's an opinion that happens to be true."

"Obviously you have issues with authority figures."

(That last line was fantasized, but isn't it great?) 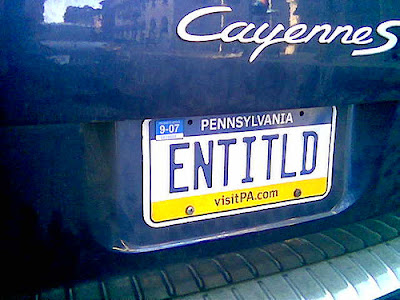 I once attended some sort of workshop (it had something to do with my sick and dying church trying to manage a last-minute, futile resurrection) where the facilitator said, "Tell me the difference between these two statements: Divorce is terrible."

(Slight tremor in the room, caused by minute vibrations from the divorced people trying not to spit at her.)

"MY divorce was terrible. Which statement is easier to accept?" 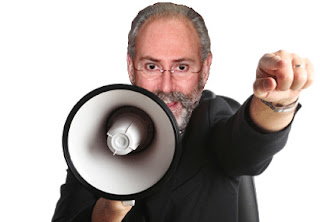 But people don't do it that way! They stride in and say, "Everything happens for a reason/God never gives us more than we can handle/It's all in God's plan." This person has never suffered a major hardship, and in fact has led a charmed existence.  God's will has been, at least up to now, a piece of cake. (Secretly she/he thinks it's because she prays a lot and "surrenders", so God favors her.) But never do they say, "I've come to believe that - " or even, "It's my conviction that - ". No, they just take one of those thingamabobs they used to tamp down powder in a cannon, and casually shove it down your throat.

"I was about to die in a car crash, but my angel saved me."

"God must have intervened."

"It was meant to be" (but NEVER with reference to anything negative. Only positive things are "meant to be". No sense of entitlement here.)

"It was God's plan that little Timmy survive being run over by an express train 47 times."

It's really just more BLAHBLAHBLAH, of a particularly toxic variety. It's toxic because it is so un-thought-out, so carelessly said. So smug. So entitled ("see, God loves me enough to pull me out of flaming wreckage. What's wrong with you?") 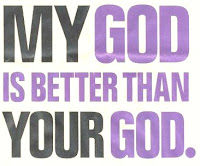 I wonder sometimes if even half of what people say is really considered, or if it just pours out of them like so much raw sewage. They snag on to jingles, axioms, homilies, catch-phrases, churn them around unexamined, and spit them in your face. They never preface these statements, just jam them up your nose as "fact".  It's easier than thinking, easier than feeling empathy or compassion or any of those dangerous things that require a little stretching of the soul.

The blatherers of the world are verbal thugs. When you see one, whether it's in Denny's or the hardware store or your local church or synogogue, whacking the palm of his hand with a lead pipe and wearing a smug self-involved smile, there's only one thing you can do. 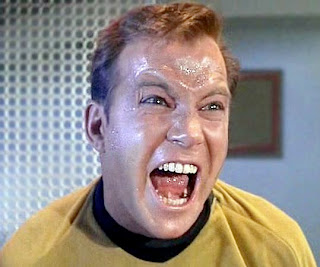