Harold Lloyd: the ghost behind the wall 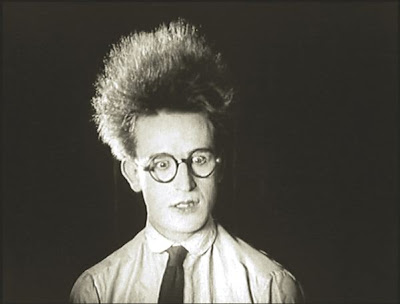 Ninety years after it was covered up by a building, a “ghost sign” for a 1922 movie has reappeared at Granville and Robson.
By John Mackie, Vancouver Sun February 23, 2012
Ghost signs from Vancouver's past spring up to haunt us still 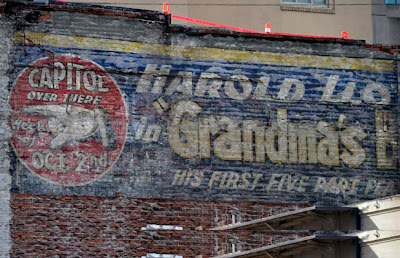 Photograph by: Jenelle Schneider, PNG
VANCOUVER — Ninety years after it was covered up by a building, a "ghost sign" for a 1922 movie has reappeared at Granville and Robson.

The demolition of a few buildings in the Granville/Robson block has unveiled a "ghost sign" advertising a Harold Lloyd movie at the Capitol Theatre.
The sign promotes the Harold Lloyd comedy Grandma's Boy, which played at the Capitol theatre Oct. 2-7, 1922.

The sign is painted onto the north wall of the Power block at 817 Granville, across the street from where the Capitol opened in 1921. Hence the sign includes a red circle reading "Capitol over there," and features a wonderful disembodied hand with a finger pointing across the street.

The sign reappeared during the demolition of the three-storey Farmer building at 801 Granville. The Farmer building was constructed in 1922, so the Lloyd sign would have been covered up almost immediately after it was painted, and hidden for nine decades. 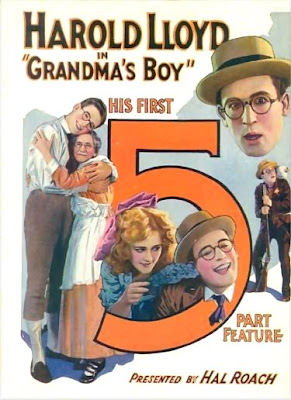 Signs like this are called ghost signs, because of their ghostly faded beauty and/or because they advertise long-dead businesses.

Several ghost signs have cropped up in recent years in Vancouver, including a lovely ad for Shelly's Bakery on Victoria Drive and a bunch of long-hidden painted signs on the Woodward's building. Part of an old painted sign for the Pantages theatre showed up on the side of the Regent Hotel when the 1907-08 theatre was being torn down.

Still, heritage expert John Atkin says he's never seen a painted sign for a movie, which would have had a short shelf life.

"You can certainly see movie posters and billboards [in old photos], but not [signs] painted on the wall," he said. 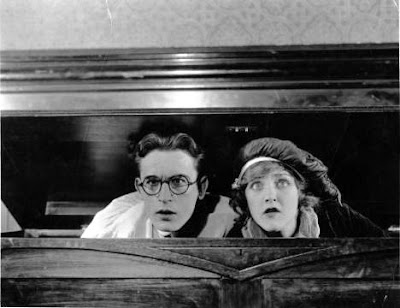 "I think the management of the theatre took advantage of the brief period when a building [on the corner] was demolished and before construction started on the new one."

Harold Lloyd is largely forgotten today, but he was one of the giants of the silent screen, a comic genius whose popularity once rivalled Charlie Chaplin. Like many silent stars, he cranked out movies at a breathtaking pace - he made 205 films between 1913 and 1947, including 40 short films in 1919 alone.

The movie was released a month before it hit Vancouver, and was already a huge hit. The Sun ad boasted Grandma's Boy "holds the world's record for continuous comedy run in one theatre - over 450,000 people have seen it in one house in Los Angeles and it's still running!" 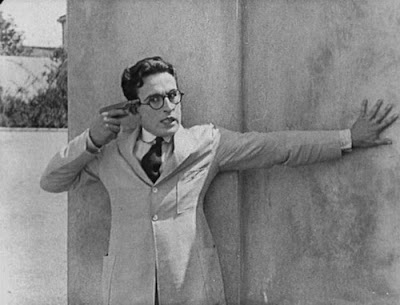 It played the Capitol for only a week before moving to the Dominion for a week and then leaving town. A painted sign would have cost the owner of the Capitol much more than hanging a poster, but would have grabbed attention away from competition like the Tom Mix movie The Big Town Round-Up that was showing at the Rex, or the Cecil B. DeMille movie Manslaughter at the Dominion.

The full glory of the painted ad for Grandma's Boy may be unveiled over the next few days as the building that covered it up comes down, brick by brick. But it won't be visible long, because the building it's on is also coming down, save for the facade.
The Power block dates to 1888, with a distinctive art deco facade that was added in 1929. It originally housed a saloon, later became a bank and in recent years was the location of Charlie's, a used CD/DVD dealer.

Both 801 and 817 Granville are being redeveloped into a five-storey building that will have two floors of retail on the bottom and three floors of office space above. The new building will have a contemporary glass facade, but the deco facade from the Power block will be incorporated into the new structure, because the facade was designated on the city's heritage register. 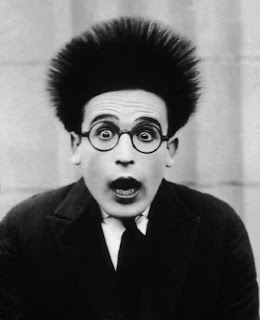 The rest of the Power block will come down, however, including the wall with the ghost sign. The city will be documenting the sign with photographs.

Another historical quirk unearthed during the demolition is an old "areaway" under the sidewalk along Robson. An areaway is a room under the sidewalk that merchants used to expand their premises in the late 19th and early 20th centuries. You can often tell where they're located because there are small purple glass bricks in the sidewalk that were installed to bring light into the space.

OK. With considerable weariness, I write about Harold Lloyd once again: in a startling bit of synchronicity, a painted sign advertising one of his most popular movies has been uncovered in my home town. Up to now it was covered up by a brick building. Everyone's scratching their heads over the fact that a mere movie would warrant an ad painted on a brick wall, but though the writer insists HL is "largely forgotten today", he was HUGELY successful back in 1922, to the point that it would not have been surprising if someone painted a bloody canvas and hung it in the Louvre every time a new Lloyd movie came out.


I don't know if this is synchronicity or not. For a long time the name Lloyd was coming up two, three, even FIVE times a day under different circumstances. Like the Gloria Baptist Church, situated at the corner of Gloria and Lloyd (Gloria was the name of his daughter). Like the movie with four different Lloyd references in it. I was going insane, and I'm still going insane.


I became so possessed by HL that I wrote a novel about him called The Glass Character, and though a sane person surely would have given up by now, I haven't: I just hate myself too much, I guess. I want to see this published before I die.