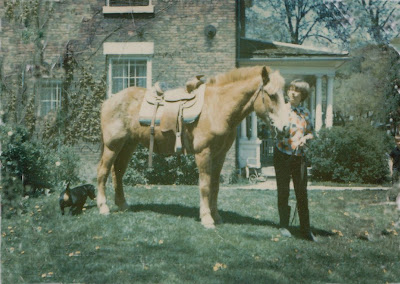 Freud called dreams "the royal road to the unconscious", but what did that doofus know? He hated women, said they were incomplete creatures, just castrated men, and couldn't even breathe properly because they breathed upward into their chests. Brilliant doctor that he was, he didn't notice that all his patients were wearing extremely tight corsets (see my corset post, which so far nobody has even looked at).

So Freud was full of shit. Where does that leave us? With the jumble, the ragbag: seeing a giraffe in my back yard (or at least, seeing its head and neck as it leaned over the back fence); going to meet myself at a train station (I never got there); and, last night, something that reeks of significance even if you don't believe in dream symbolism at all. 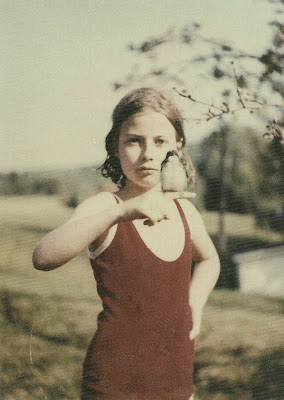 It must have been Rocky, my shaggy friend, a non-prepossessing but game little creature with whom I had an intense bond. I've written about Rocky before, and he was an extension of my childhood, the factor that made my pre-teen years bearable. Before we sold him when he got too old and expensive to keep (both boarding and farrier/vet bills were starting to pile up), he was my comfort and solace. I'd longed for a horse as a young girl, and here he was, not exactly a snorting Arabian but nonetheless sweet-natured and dependable.

So when I had this dream, this horse lying on the ground shuddering and apparently breathing his last, it must have been Rocky: I knew that sorrel coat with white stippling through it (for he was a true strawberry roan, just like in the song). I was sitting on the ground leaning over his head and stroking his neck, knowing that a downed horse wouldn't last long and probably should be put to sleep.

Some anonymous people were around (and just who ARE these anonymous people in my dreams? I don't know, they're just there), and I asked them to call a vet. The time had come. His eyes were milky and fixed, and he only breathed once in a while, if at all. 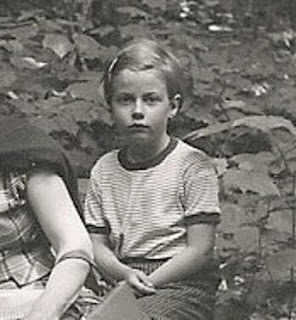 A big shudder ran through him, and he performed that motion that horses have been doing since time immemorial: starting with his front legs, he began to heave himself back on his feet.

Foals do this when they are born, if awkwardly. It's a practiced movement, and kind of impressive to watch. But this was like literally watching a horse come back to life.

He seemed fine. His eyes were warm and bright again (Rocky always had what horsemen call "a kind eye"), and he started wandering around looking for stray wisps of hay. Soon he'd be lipping them up and chewing with that gratifying hollow crunching sound. All seemed well. 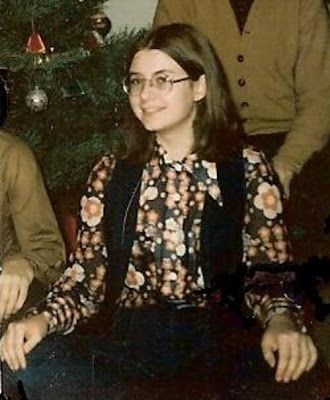 And then: the vet arrived, a woman in a white coat literally wielding a giant syringe with squirts coming off it. "Don't kill him, he's fine!" I protested. She looked at him, then looked at me as if tempted to use the syringe on me instead.

Then the dream sort of wandered into weirdland: the vet hitched up a crude sort of wagon with chains instead of reins. Then she made another one for me, but the chains were all wrong, different lengths, and I had no control. There did not seem to be a horse involved, so I am not sure what was supposed to propell this ersatz chariot. She fixed the reins/chains, so it all worked, but WHAT worked? Where were the horses? Why were we doing this?

And that was the end of it, or at least the part of it I remember.

OK then. . . let's get symbolic, shall we? I know it's early in the morning. The dead horse which is not really dead is my "dream" - in another sense (and why do we use the same word? I've never been able to figure that out), my dream of being published again, of feeling like an author instead of a near-totallly-unread blogger wasting my time every day.

It's Rocky, not just any horse.  And I had author dreams from the very beginning, from the first time I realized, with a shock of wonder, that someone actually created these magic carpets I held in my hands. 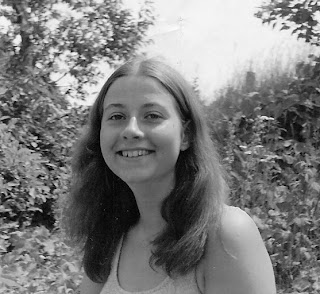 It amazes me how little support I've had, as my parents wanted me to be a musician and were automatically disappointed by anything else I did. Now people try to talk me out of wanting to do more. Just be happy with what you have. At the same time, they are constantly saying, "Well. . . ?", a sort of "what have you done lately" thing. What have you done lately to justify all this time and grief?

I learned today that a publisher I had completely given up on is still "considering" my novel. I don't know what to think about this. It's distressing because it has been a very long time and I had almost given up, to the point that I sent them a very strongly-worded email yesterday. I got "a" reply, but nothing definitive. This is not a hand-cranked press, but one that is larger  than anything I would normally deal with. 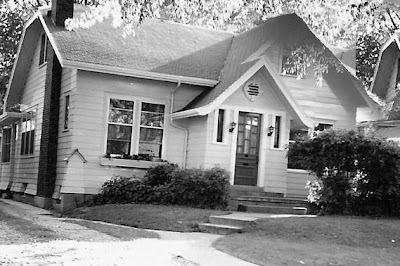 Will the horse stand up again? Walk around and snuffle for food as if nothing happened? I don't know. I bounce back and forth between excitement and depression/despair. I tell myself not to hope.

The picture of Rocky and I at the top of this post was taken in our front yard in Chatham in about 1966.  It has a misty surrealism that I love. The four corners of the original, which is one of those old Instamatic things that's barely  2" x 3", were cut off, maybe to fit into a small frame. I know almost nothing about photoshopping, but in this case I really wanted to restore it. If you look very closely at the corners you might see evidence that I didn't know what I was doing: the program was a strange one that plastered "cloned" material on the photo surface like a paint roller. But when I was done, it seemed to pop out at me in 3D in the eerie way of very old photos (such as the header on this blog, also taken in my front yard). 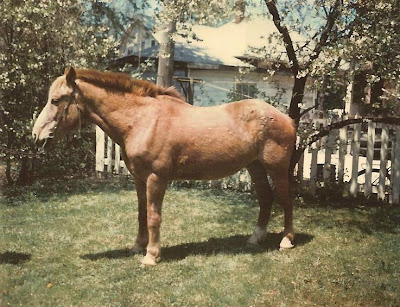 Rocky didn't like being tied in the back yard - in fact, I didn't tie him at all, just left him loose without saddle or bridle or anything - and while we were having dinner he nudged the gate open and took off. Never had he run at such a clip. He galloped all the way back to the barn while we feverishly  pursued him in the family station wagon. I remember my father saying, "I never knew that horse could run so fast."


When he reached his destination (the barn) with unerring accuracy,  he stopped dead as if putting brakes on his hoofs and moseyed on over to a bale of hay.

What does it all mean? Oh, probably nothing. I'm just trying to make my Wednesday a little more bearable. 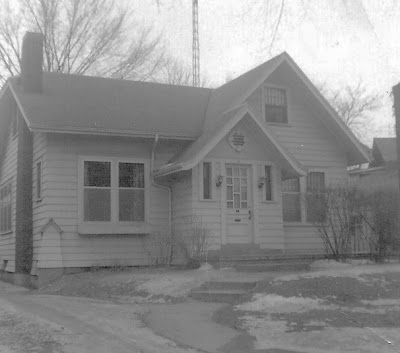 Posted by Margaret Gunning at 9:09 AM 2 comments: