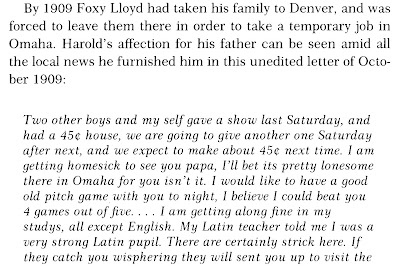 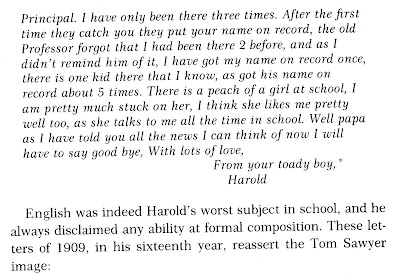 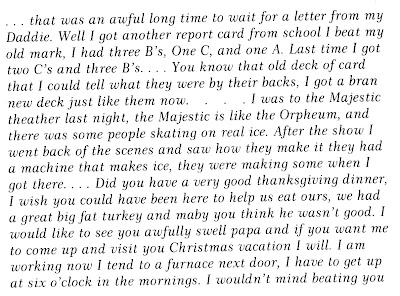 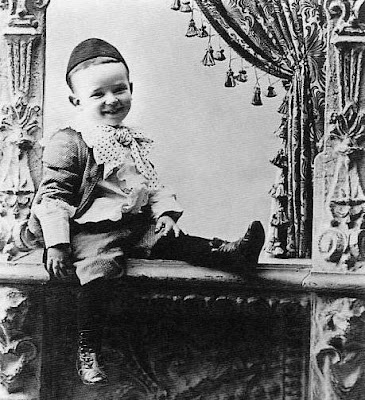 By age 16, "Toady boy" Harold Lloyd was already getting used to a few things: (a) he was not going to excel at everything, especially not English composition, (b) his father wasn't going to be around very much, and (c) he'd spend most of his life trying hard to be liked.

The fact that he mainly was liked didn't seem to stop him. Being an actor was part of that desperate drive for approval, and he pursued it with the same fever that informed all his major life activities (including the pursuit of women).

Lloyd was a fox. He was a doll. It wasn't just his looks, it was something about him, something unattainable. You never truly touched the core of him. He's generally lumped in with Chaplin and Buster Keaton, the Holy Three of silent comedy, but this inclusion goes a lot farther than the fact that all three had problems with the written word (in Lloyd's case, aggravated by the fact that the family moved every three months or so). 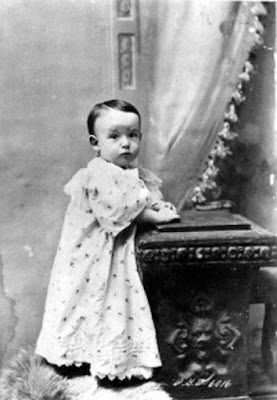 His intelligence was uneven, typical of the genius who burns fiercely in some areas, but sputters lamentably in others. I love these letters however, with their boyish, Tom Sawyer-ish syntax, blooming gift for storytelling, and endearing spelling errors which you might see in the writing of a nine-year-old.  I also like his reference to the peach of a girl he's "pretty much stuck on", and the reference to the turkey: "mabe you think he wasn't good". This kind of rural idiom is almost Mark Twain-ish, though Lloyd came from Middle America and had a slight cowboy twang rather than a drawl.

A gift can be a burden. Lloyd didn't drink or even smoke, perhaps afraid of what those habits had done to some of his cohorts (not to mention family members, including his wife, former co-star Mildred Davis). Instead he kept a blur of activity going, pursuing multiple hobbies after his screen career ended in the 30s. He took 3D pictures of naked women (no kidding, tens of thousands of them!). He studied micro-organisms in his basement. He painted abstracts, often staying up until 3 in the morning. He bred and showed dogs: not just any dogs, but Great Danes! And by now you're probably getting the picture.

If a man has a Christmas tree with 20,000 expensive Tiffany ornaments (which he kept up all year: imagine taking all that stuff down), if he regularly orders the entire catalogue of a record company and hooks up stereos in every room of the house (read: mansion), if he. . . well. He had to win every card or golf game, or he could be downright surly. He'd demand a rematch and kept playing until he won. He had to win. If you win every game, it isn't a game any more, or certainly not a competition. 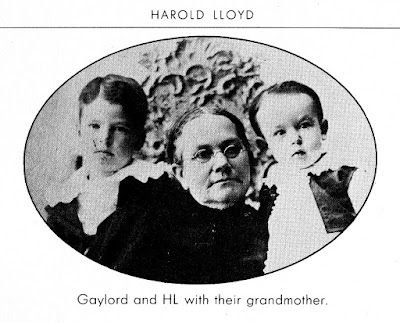 He insisted his staff and friends call him Speedy. Kind of a weird nickname: perhaps Daddie gave it to him (he whom the family named Foxy!). I've seen video of his later years, which absolutely fascinates me for some reason, and he doesn't seem wired or pressed or urgent, except that he is. At one tribute, he stands on the stage at the front while people (Jack Lemmon and Steve Allen among them) fire questions at him. He sort of swaggers back and forth in an odd way, and he gestures openly with the hand that had almost been blown in half in a hideous accident in 1919. I think the swagger is disguised nervousness - all that insistence on winning surely must reveal an awful lot of insecurity - and perhaps a desire to bolt out of there. He also looks something like a naughty little kid, the kind who "only" has to go to the Principal's office three times.

It was said Harold Lloyd never grew up. Not completely. He was a boy in a man's body, a Peter Pan. His youthfulness could be delightful, but I'd guess it could also be a pain.

The quote at the beginning of this post is from a book by Tom Dardis called The Man on the Clock. It's one of the better Lloyd bios - not that there is any overabundance of them, and there's a lot I'd still like to know about his private life. But the end of the biography is disturbing. 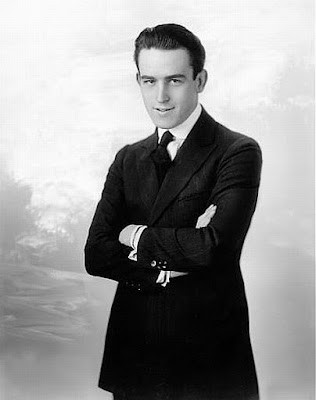 This is what happened. His wife's brother, a doctor, paid him a visit in 1970. "Davis hadn't seen his brother-in-law for some time. He was shocked by Harold's altered appearance and immediately placed him in a hospital for further tests. His suspicions were correct. Harold's cancer had spread to his legs and chest. Dr. Davis recalls that the cancer raced through Harold's body with ferocious speed."

Further treatment did no good, and Harold was told that he had something like six months  left to live and that he needed to put his affairs in order. He took the news quietly, went upstairs and shut his bedroom door. Three weeks later he was dead.

Even the disease that claimed his life was accelerated, speedy, but then, that was his nature. He  had to win the game, you see, or else he just wouldn't play. 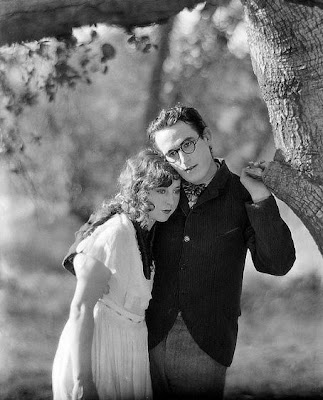 Posted by Margaret Gunning at 10:13 AM No comments: