Until a few minutes ago, I would not listen to anyone's interpretation of this melancholy little gem except William Warfield's. I still love his version, but this was a real find.
I blush to admit I'm not very familiar with Thomas Allen (in fact, it's also the name of a publisher I've been trying to ding for years!). Now I do a little probing, and find he's one of the world's finest baritones: and no wonder! His restraint in this piece is amazing, his tone lucid and full of rippling, iridescent overtones.
I do hear hints of Warfield in his interpretation, but that's not a bad thing, is it? The accompaniment is ravishing and seems to be in love with the music. I wish I had more info on this video. (Originally I was looking for My Soul is a Witness sung by Paul Robeson, couldn't find it, found several other spirituals, then stumbled on to this. The Robeson search came from, strangely enough, the Hound of Heaven quote: "I shook the pillaring hours/And pulled my life upon me", which got me thinking about Samson (presumably, the source of the poetic image), which got me thinking about my favorite verse from Witness:
You read in the Bible and you understand
Samson was the strongest man
Samson went out at-a one time
And he killed about a thousand of the Philistine
Delilah fooled Samson, this-a we know
For the Holy Bible tells us so
She shaved off his head just as clean as your hand
And his strength became the same as any natural man

Posted by Margaret Gunning at 7:59 PM No comments: 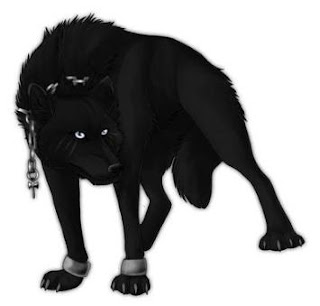 And a dog stood over him. He was that sort of person. Hounded. So when the 19th-century English poet Francis Thompson wrote his most famous poem, The Hound of Heaven, it had (and still has) the power to make your neck-hairs rise with a disturbingly accurate portrayal of human anguish and despair.
Given when it was written, it's no surprise the language is overly plummy and sometimes almost impossible to decipher. "Fear wist not to evade, as Love wist to pursue." (Wist??) Ordinary words are turned on their ear: "skiey" (which I kind of like), "silvern", "dunged" (but I'd rather not go there), and, in the final line, when God finally catches up with the poor fellow, "dravest":
Thou dravest love from thee, who dravest Me.
I think that word puts me off the most, since when you finally get past all the poet's agony and are about to witness his dramatic salvation, you don't know what the hell he's talking about. 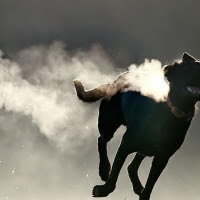 The whole reason I'm posting this is that there's a line, one out of the 184 or whatever it is (and it takes Richard Burton almost nine minutes to recite this on YouTube), that periodically repeats and repeats in my ear:
The pulp so bitter, how shall taste the rind?
It's an example, amid the overly-florid language and sometimes offputting emotional excesses of the work, of startling clarity and brilliant economy of expression. He shoves that rind in our faces and makes us taste, and it is bitter fruit indeed.
I would never torture you with a transcription of the whole thing, because its twists and turns can be exhausting (and besides, it's just plain too long). Attention spans were much longer then, people were much more attuned to the written word (especially when recited), and almost everyone adhered to conventional Christianity in some form. So his image of God as this lumbering lout with pounding feet chasing after him was probably less oppressive than it seems today.
I fled Him, down the nights and down the days;
I fled Him, down the arches of the years;
I fled Him, down the labyrinthine ways
Of my own mind; and in the midst of tears
I hid from Him, and under running laughter.
Oh yes. The imagery splashes pictures onto the blank canvas of the mind: running away from something, here described as "Him", but something that could be infinitely more mysterious and powerful than any conventional Christian God.
It's hard to pluck out single lines here, as the poet's thoughts tumble out with manic urgency, line blurring into line: but there are a few, yes, there are a few. . .
Across the margent of the world I fled,
And troubled the gold gateways of the stars,
Smiting for shelter on their clanged bars:
Really, it's the middle line that draws me, those gold gateways: but it's that word "troubled" that is so odd and affecting. Maybe he was just looking for the right number of syllables, I don't know. How can anyone have the power to "trouble" the stars? Either he's expressing delusions of grandeur, or the word means something entirely different to him.
I said to Dawn: Be sudden - to Eve: Be soon;
With thy young skiey blossoms heap me over
From this tremendous Lover -
Float thy vague veil about me, lest He see!
Well, this is nearly a peep-show, isn't it? Quick, God is coming - put your pants back on! Dawn and Eve could be his girl friends, or wanton women at least, cleverly couched in coded language. "Dawn" and "eve" represent each end of the day, but Eve is also the "first woman", and therefore infinitely desirable. And oh those skiey blossoms, big fat plumphy cumulous heaps to roll around in (with Eve - or Dawn - whose turn is it, anyway?). And what about "this tremendous Lover"? That's nearly homoerotic, when you think about it.
To all swift things for swiftness did I sue;
Clung to the whistling mane of every wind.
I don't need to explain this one, its visual imagery startlingly cinematic. Simply brilliant. 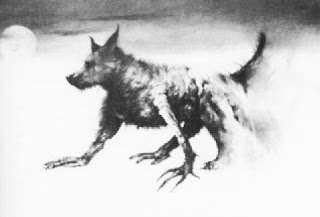 As I said, it's hard to pull lines out of this without dragging up a root-ball of context, but I'll try (coz I'm already getting tired, aren't you? This ain't English 101.) He speaks of "quaffing"
From a chalice
Lucent-weeping out of the dayspring.
OK. What does the poem mean? What the hell is he getting at? "Chalice" (he doesn't frequent Starbuck's, obviously) could be the Holy Grail, or the cup of communion. Lucent-weeping, well, what's that? Lucent means either translucent, permitting light, or a source of light. The poet is weeping crystalline tears, perhaps: and as far as I know, Dayspring is a reference to Christ. 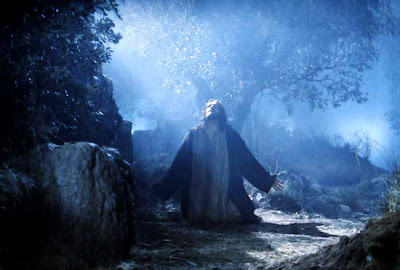 This fellow does have delusions of unusual influence:
Even the linked fantasies, in whose blossomy twist
I swung the earth a trinket at my wrist
Or does this express his disdain or even contempt toward the world? If the world is but a trinket, a charm on his tinkling little bracelet, what does that make him: a cipher, perhaps? Or could it be this way: the world somehow swings around him, an egocentric sun eclipsed by his own transgressions.
But perhaps the most powerful passage, which I can't pull apart but must present whole, is this description of his self-created hell:
I shook the pillaring hours
And pulled my life upon me; grimed with smears,
I stand amid the dust o' the mounded years -
My mangled youth lies dead beneath the heap.
Oh my goodness, this fellow is not just in trouble, he's (in his own estimation) already dead, and in dire need of resurrection. In some sort of awful anti-heroic Herculean or perhaps Samsonian gesture, he has pulled the entire structure of his life down on his head. But the next two lines are tasty enough to keep you wading forward in the hip-deep mire:
My days have crackled and gone up in smoke,
Have puffed and burst as sun-starts on a stream.
If hell can be this heavenly, why fear the hound? 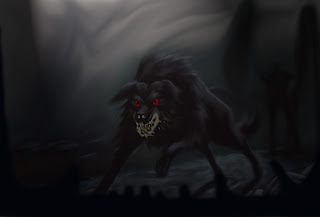 Email ThisBlogThis!Share to TwitterShare to FacebookShare to Pinterest
Labels: Francis Thompson, The Hound of Heaven

Everything I touch turns to. . . 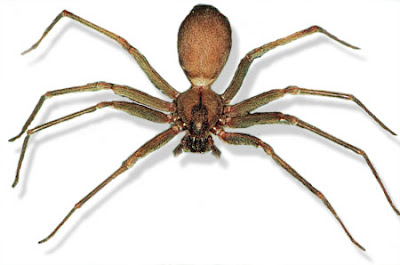 Yes. Every once in a while, everything turns brown.
I sort-of figured out why I can't attach links or embed videos. I have it more-or-less under control, though the videos are small.
Then another problem, so bizarre I don't know if I can even describe it. I lost the title to my blog, which used to appear below the photo of the little girls. It just wasn't there any more, though it was saved correctly under Design and should have been displayed.
I can't have a no-name blog. I'm not Anonymous. My name is on it for a reason. It's a kind of ad for my work. So I got to work fixing it, and came up with: white lettering against the background of the photo (at the top). It looked OK and was saved and everything.
And it shows up fine, until. Until you go to Older Posts, or an individual post, or a brand-new post, or anything except the home page. Then it shows up. . . brown. 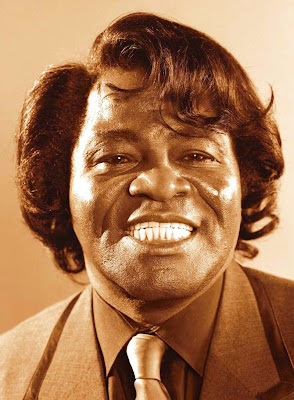 Brown, as in I can't see who the hell wrote this. BROWN, as in, sorry, you didn't fix the problem at all, you stupid bitch, phhhbbblblblblbphhhbllblblblblbllblblbllbtt!
To make it even more screwy, the "blog description" (the line below the title) still shows up in white. I have gone over this again and again, and the setup is perfect. Then I get this intermittent (not even consistent!) problem with display.
I will not go on one of those help sites. They make me ill and never tell me what I need. I need to email a real person who knows what to do. Even my son the techie wizard is stumped.
Nevertheless. I somehow figured out the other problem, or most of it at least. Enough to avoid a nervous breakdown in the near future.
But this. 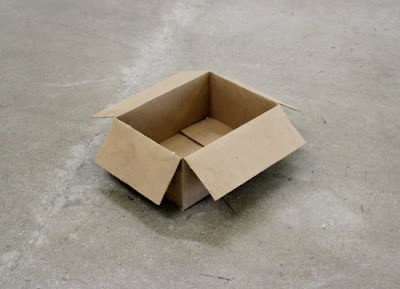