Don't ask me why, but I love this 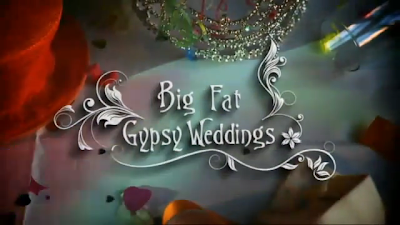 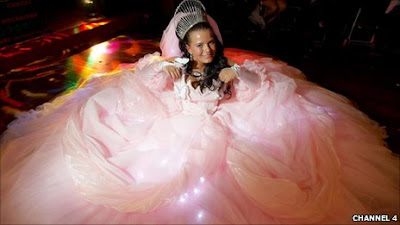 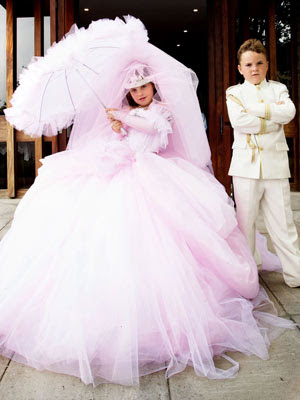 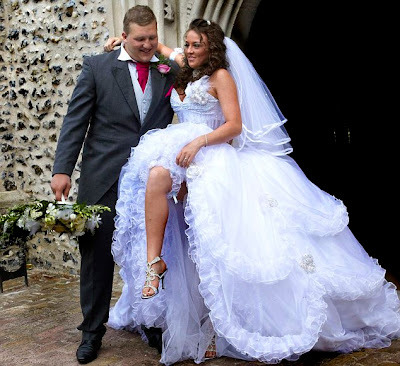 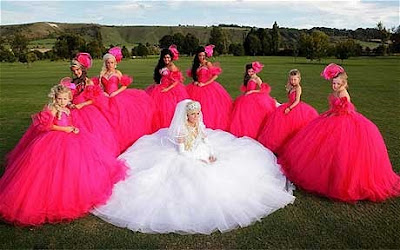 Please bear with me if all this is a little disjointed: I'm working from fragmentary information cobbled together from a "documentary" (read: TV sideshow) on TLC called My Big Fat Gypsy Wedding.

I don't watch bridal shows as a rule, mainly because they bore the piss out of me. (My own wedding was minimal, but lo and behold, we just celebrated 38 years together.) But here is a culture which seems to live for weddings and first communions, the recipients of these rituals so swathed in foamy tulle and caked-on makeup that they are barely recognizable as themselves.

This is all about "gypsy" culture, mainly of Irish descent, living in various parts of Britain in communities that resemble a typical North American trailer park. Strictly speaking, since they aren't Romany (the East European itinerant culture that has existed for centuries), they aren't really gypsies at all. Such a moniker is almost like using the n-word for black people.

They prefer to call themselves "travellers", though I didn't see much travelling going on in these first two hour-long episodes. Mostly I saw little girls in skimpy, trashy outfits gyrating and wagging their butts suggestively, brides so immobilized in grotesque, tacky gowns that they had to be carried, and matter-of-fact descriptions of a culture that oppresses women so completely that no one even thinks of violating their rigid, sexist rules.

I did a bit of digging (but only a bit: I was sent reeling backwards by these bizarre extremes, and several times was nearly convinced it was a TLC-perpetrated parody), and found out that, ye gods, me own Irish ancestors, bless their shabby little souls, might have been lumped in with these people. It seems odd to me that they're sometimes called tinkers, a term used in the most derogatory manner possible. Tinkers were tinsmiths who mended things like pots and pans (back in the day when everything wasn't just chucked out and replaced). They also made various kinds of practical, useful kitchen implements.

How do I know? At my grandma's house, my grandma on my mother's side, there were two blackened old cookie cutters made of ancient tin. One was a pig and the other was a dog, a lean stretched-out dog like a greyhound. I eventually found out from my mother that these had been made by my great-grandfather before the family emigrated to Canada (perhaps to escape the potato famine: I'm still not sure about that). Which means that my great-grandfather, a tinsmith by trade, was probably called a tinker.

It's strange, because my mother never mentioned any sort of prejudice against the family and talked about her grandfather as a good honest working man with a solid trade. Did he have an old wagon with pots hanging off it and banging together, and a "tinker bell" (yes, there really was something called a tinker bell, though I can't find a definition of it anywhere) letting people know that he was coming?

And what's so awful about that, I ask you?

I think in those days, and in these days too, people get lumped together. To say that "gypsies" or travellers or whatever-you-call-them were completely innocent of some of society's charges would be simply inaccurate. Though the first couple of episodes of this alarmingly extreme program were vague about it all, a little digging brought out the fact that many of these travellers are squatters, setting up their "caravan" communities on land that does not belong to them.

Wait a minute, isn't that. . . theft? But we can't say that about gypsies!

My research on the careers of travellers seems to be a couple of hundred years out of date, stating that traveller cultures usually breed greyhouds or Gypsy Vanner horses, which is pretty hard to do if you're itinerant and don't own any land. I don't see how they can raise those big old draft horses in a trailer park (particularly if it isn't theirs). I'm looking forward to seeing how the show gets around all that (if in fact it does), as it has already decided to be completely sympathetic to these (probable) squatters who are refusing to pay rent, yet spending thousands on these eyesplitting explosions of tulle (some laced with flashing LED lights) that will never be worn again.

Though this is the kind of show you watch between your fingers, it may just shed a little light on a subculture which has seemingly been reviled since time began. I would be fascinated to see a program about real gypsies, the Romany people of Europe, and whether or not they insert their six-year-old daughters into stiff, scratchy gowns that cripple them and leave angry red welts on their bodies.

I don't understand all this superficial display, this flaunting of - what?, and the jaw-dropping bad taste that just keeps escalating until we catch sight of the mother of the bride, so caked with makeup that her face is brown, wearing elbow-length black leather lace-up armbands to her daughter's great moment: her bizarre funhouse-mirror Disney-princess moment that signals the end of girlhood and the beginning of a lifetime of oppression and servitude.

(Just had one of those creepy moments. Real creepy. I never wondered about the pig cookie cutter; the drunk lolling in the gutter with a pig for a companion was an awful Irish stereotype. But the greyhound? I can't imagine a stranger subject for a cookie cutter, with all those long slim legs breaking off. Didn't Wikipedia mention the travellers raising greyhounds? Is there something I'm missing here?)

Posted by Margaret Gunning at 10:08 AM 2 comments: