Humour me here: I love him!

Posted by Margaret Gunning at 11:18 AM No comments: 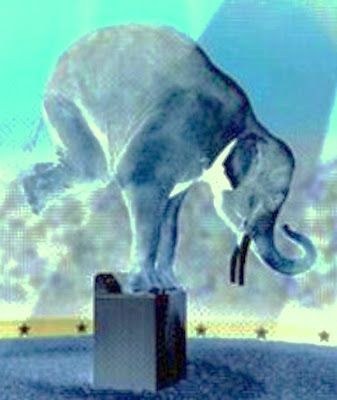 It was one of those days when I had to get away from my desk. I was growing into it, or out of it, and my butt hurt. It being an afternoon during the week, there was no one to go with, but a matinee by myself seemed like a welcome distraction.

Didn't know what to see, as the options seemed limited. I had already seen Rio, a vastly entertaining animated movie about parrots (and remember, I'm a bird person) with Caitlin and Ryan, whose saucer-eyed, "awesome"-exclaiming reactions were worth the price of admission.

So I saw this thing, this ad for something called Water for Elephants. It was based on a novel, the kind of novel Oprah would've picked if she were still picking anything (besides KFC). So it looked like it had a certain art house cachet, even though the stars (Robert Pattinson, that sooty-eyed matinee idol from dem-dar vampire things) and Reese Witherspoon (Oscar-winner, isn't she?) were definitely A-list.

Turned out it was a circus picture. Circus pictures generally turn me off. I've seen The Greatest Show on Earth umpteen times, though mostly for the train wreck. At least this cinematic juggernaut was spot-on accurate in depicting circus life, mainly because they drafted an entire circus to perform in it. And the performances were uniformly impressive.

Then came this thing.

Robert Pattinson plays the son of German immigrants, struggling to attain a degree to become a veterinarian during the 1930s. Suddenly his parents blow up or something, and he runs away to join the circus, pretending to be a vet (which he sort of half-is). Soon he is dazed by the beauty of the Horse Girl, Reese Witherspoon, all cute and thin in a spangly outfit.

But it got worse. This was s'posed to be a tawdry little small-town circus, and Reese was married to the Head Guy, the Really Evil Ringmaster, who was about as evil as Liberace. Thus was formed a love triangle that was so pallid and weak, I wondered at the sexual orientation of these guys.

It wasn't just that everyone was phoning it in. The chemistry was nil. Nothing. Pattinson is cute in a purple-eyelidded way (more like a girl than a guy), but seems to be standing there waiting for everyone to fall down in admiration. Witherspoon was just lost, trying her best with a corny script that had somehow lost all its magic in translation.

But this is what knocked me over.

The star horse, who didn't seem to do anything very special, had something wrong with his hoof. There was a lot of debate about what it was. Oh, it's only this, it's only that, a mere abscess (!), a few days' rest and he'll be fine. Finally, the would-be vet decides to take a look.

But he faces the wrong way! He stands at the horse's shoulder, facing front, and awkwardly lifts the hoof. He was lucky he didn't get his head kicked in.

Listen, I am no equestrian expert, but I did look after a horse (my horse) for three or four years, and sometimes he picked up a stone. I'd have to get in there with a hoof pick and dislodge it. Then there was the routine clearing-out of mud or poop or other debris, part of everyday grooming. It's not that hard to do.

I'm not sure when and how I learned this, maybe at the same time I learned you mount and dismount on the left (and I've seen many a movie where stars get on the wrong side). But it always seemed to me that to get a good view and to avoid mishap, you should face the rear. That is, you and the horse are facing in opposite directions. You stand beside him at his shoulder and sort of lean against him, putting him a little off-balance so he almost welcomes it when you lift his foot. If he's well-trained, he'll do it automatically.

So here was this absurd "vet" (OK, he didn't have his degree yet, but still) looking at this upside-down hoof and deciding in about 2 seconds that the horse needed to be shot. (It wasn't even limping.) And of course, there was that dramatic scene where Reese whimpered, "No. . . no. . ." and the horse made groaning noises and Robert Pattinson raised the convenient gun he happened to have with him, and. . .

I just don't get how someone can direct a circus movie and know so little about horses. When I went to Cavalia, the calibre of horsemanship was overwhelming: I wept in a few places, nearly had a nosebleed, and more than once joined the audience in crying, "No, no. . . "before they attempted (and nailed) a seemingly-impossible stunt.

At least there was an elephant in the movie who knew how to act, but it was one of those old-time circus elephants that stood on one foot and stuff, kind of disturbing. It's no longer fun.

This picture badly needed a technical adviser or at least someone on-board who had had anything at all to do with circuses, or at least with horses. After all, if you can afford Robert and Reese, you can afford someone who knows one end of a horse from the other.