Do I have to actually write something? 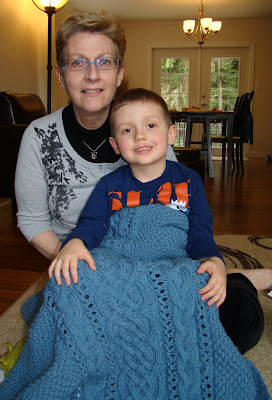 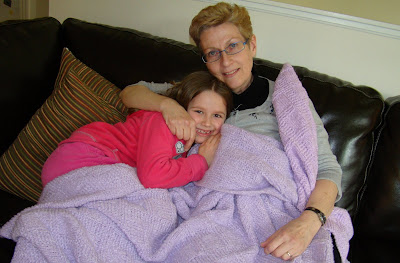 Things are particularly sweet with my grandkids. For Ryan's 5th birthday, I knitted him a new blankie, his old one having been reduced to a pile of strings. Now he must transfer his attachment to a nice-looking one, which I hope he won't pull to pieces.

Caitlin's new lavendar fuzzy replaces her yellow fuzzy. She bit a big chunk out of it - no kidding, and she's 7. She wore away at the edge of it for a couple of years until it had a big semicircular bite mark on it. I begged her not to chew this one to pieces, as it cost about $45.00 to make.

NO MORE BLANKIES, I swear! Yes, I love making them, but it strikes me as silly to go on and on replacing them until they're in university or something, or getting married. "Where did the groom go?" "Oh, he lost his blankie. We'll just have to hold up the service."

In other news, things are moving along, or at least moving, maybe, in my search for a home/venue/a shred of hope on The Glass Character. I suddenly joined Facebook and feel foolish now because my "profile" was nothing but a desperate ad for the novel. I'll have to change it today if I can get the bally thing to work. I feel embarrassed, because I don't know Facebook from a hole in the ground and swore I wouldn't go there. BUT I REFUSE TO TWEET. I have a bird to do that.

Just so.
Posted by Margaret Gunning at 9:56 AM 3 comments: