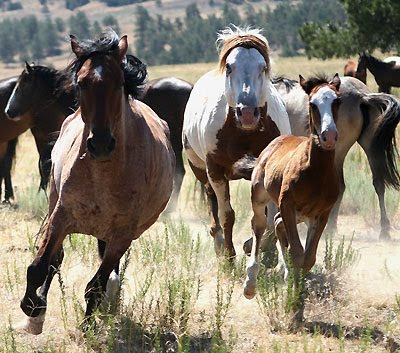 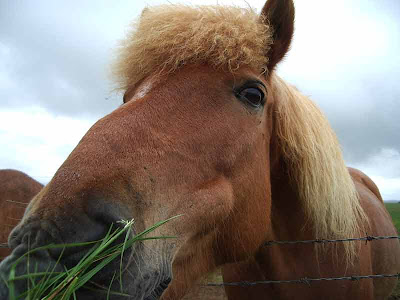 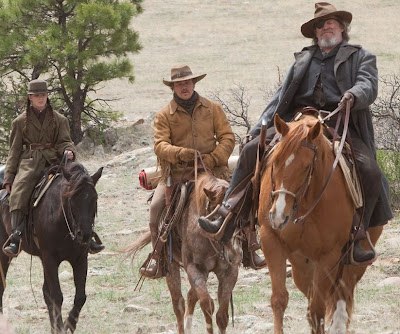 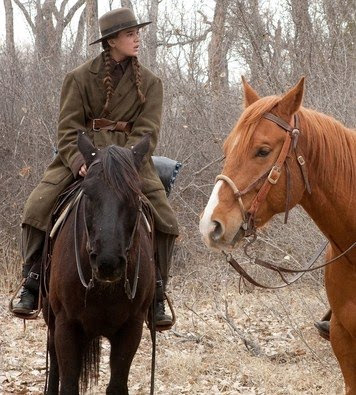 Y'know, cowpokes, just about the last thang I wanna do right now is write a movie review. So I won't, even though I liked the new take on True Grit by the quirky Coen Brothers (previously known for putting characters through the wood chipper and stuff like that).
Like a lot of non-Western fans, I liked the old True Grit and wondered why it needed to be remade (though I was delighted to find that, even with all the changes, they retained one line, the immortal "Fill yore hands, you son-of-a-bitch!"). Jeff Bridges did a creditable (and credible) job filling the huge boots of John Wayne as Rooster Cogburn, this old guy who likes-da shoot up people, like. So this little girl, this Maddie whose father got shot? She goes to him.
She isn't sorry, but that's not the part I liked. I liked the fact that nearly all the men in this thing were shaggy-like. They had long greasy hair and chin spinach and "mustaches" (the sheer size of them demanding a plural form). Just look at an old photo of Buffalo Bill Cody, will you (I mean, right now), and you'll see how awe-then-tick-lakk this-all is. No clean-shaven guys here, no razors on the prairies (or if they had 'em, they were just a-usin'-em to flick chickens). Even the eyebrows were different then, way out. They grew different, maybe it was the soil.
So this Rooster guy, he has this horse, and it don't look like any Western movie horse ever seen, not like Trigger or Silver or Desperado or whatever-else. In fact, all the horses in this movie look like real Western horses, a surprise that was almost a shock. Cowboys liked their horses compact, tough, low to the ground and savvy, none of this Arabian dish-faced mane-tossing bullshit. Just get the job done, and on the minimum volume of oats.
These horses filled the bill. They weren't showy, in fact some-o'-dem were sort of mingy little things, their necks straight, coats shaggy-like as if they lived outdoors, which back then they did. One of them was an Appaloosa, the kind with the dots on the butt, and the dots stand up like felt. Don't know where they got them, but certainly not from Horse Central Casting. Maybe they scrounged around to find them in the real West? Who knows, but these horses resonated with me and my former life rocking along the trails in a beat-up old Western saddle on a mingy but sweet little horse named Rocky.
Nobody knew his pedigree, because like a lot of horses he didn't really have one. Cowboys went on faith back then, and good trading. Their bloodlines were mostly mustang with a little bit of a racehorse that broke loose once by mistake. And Spanish Conquistador blood that went way, way back, so once in a while one of them, mingy or not, would start high-stepping all by himself. You'd hear a single, sad note of Spanish guitar, then he'd go back to lopin' on down the lone prai-ree.
I liked the horses and the chin-spinach and the foul talk in this movie (not really obscenity, just language snarled and spat and raunched, as if, in the words of Tom Robbins, it had been strained through Davy Crockett's underwear). I wanted to get on one of those horses, an easy climb. I could lean down beside his thick ol' neck and tell him things. He'd know what I wanted before I knew it myself. He wouldn't ask much, but would give all he had.
A horse gets ridden into the ground in this movie, and it's hard to watch, but it's only to save a little girl's life. The horse literally runs until it groans and staggers and collapses, and Rooster Cogburn shoots it in the head, a mercy. They don't make horses that game any more. They don't make horse casting directors that pick mingy little, game little, shaggy little mustangs that run 'til they drop, either.
I'd like to see more of it.
Posted by Margaret Gunning at 8:29 PM 2 comments: