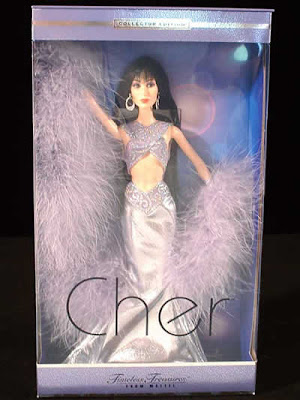 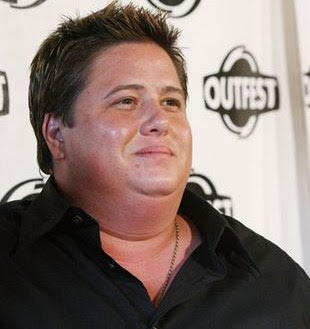 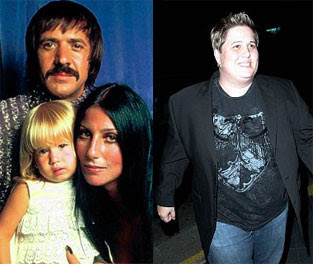 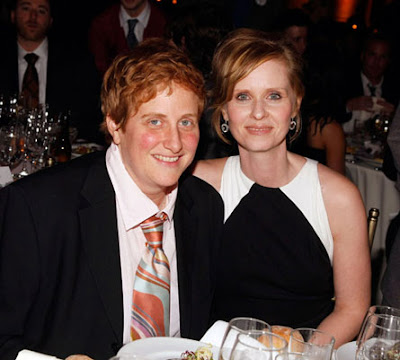 Like a lot of boomers, I remember the Sonny and Cher Show, which got more painful as time went on. Cher was already beginning to look embalmed (a process that has become so extreme, she now looks like a still picture of herself, her eyes and cheeks hollow in that fallen way of the grossly messed-with face). The two feuded, then divorced, but kept on performing together because there was money in it.
When Sonny died many years later in a skiing accident, piling into a tree, Cher got up at his funeral and sobbed and ranted, while his actual widow watched the highly inappropriate spectacle from her chair.
But hey, she's Cher! She's an Academy Award winner (which still serves as a kind of badge of "made it in Hollywood", even if it was 25 years ago). She's a rags-to-riches kind of gal, which still carries some sort of cachet in show biz. Gone are the days when, puffy-faced and large-nosed, her eyes smudgy and her hair hanging in two black curtains, she proclaimed the sappy anthem "I've Got You, Babe" to the much-hated Sonny, the man she couldn't wait to get away from (except at his funeral).

"Some people seem to think that Sonny was a short man! Well, I'm here to tell you that he wasn't short! He wasn't short on talent! He wasn't short on love! He wasn't short on. . . " (Let's not forget that Sonny wasn't short on discernment, either. If he hadn't "discovered" Cher at the bargain-basement counter, we'd be looking at an empty chair.)
But that's not what we are here to discuss.
Cher's in the news again. I've already recorded the recent 20-20 interview on my PVR, but haven't seen it yet. She's in this new movie called Burlesque. It' s being hyped to the max, but so was that other one, that Fellini-esque musical with Penelope Cruz in it: what was it called, anyway? Nine, or Ten, or Eight-and-a-Half? It flopped badly at the box office, maybe because no one in it could sing.
Aiding and abetting all the new-movie hype is the unsettling fact that Cher's daughter Chastity (perhaps traumatized by being given such a Godawful name) is now a man. Yes. No one knows what to call "her" now, least of all "her" mother, who is trying very hard to be cool about it, when we know she's not.
It would be hard to be cool about it, that little blonde tyke who came on at the end of every show, with such a sweet resemblance to her mother, turning into a big beefy linebacker with no clothes sense. "Chas" gradually became more and more androgynous over the years, put on a lot of weight, cut her hair shorter and shorter: in other words, came out by degrees.
Hey, nothing wrong with that! Cynthia Nixon chose a very large, short-haired, tough-looking, be-suited woman for a partner, didn't she? Cynthia Nixon, the red fox! Geez. She could have had anybody, couldn't she? Portia de Rossi is gay, isn't she? It shows it can be done. (Good on you, Ellen.)
So here we have Chaz Bono, or whatever his/her last name is now (Free-to-Be-You-and-Me, Lesbiangaybisexualtransgenderedundecided, Son-of-a-Bono: I'll resist the more obvious one, it's too mean). Obviously, a lot has been done to her, surgically and otherwise, but can't that also be said about her mother?
Cher has been injected with so many preservatives over the decades that she now looks like something from Madame Tussaud's House of Wax. When she retires, just prop her up in some souvenir shop in Niagara Falls. (Or put a wick in her. She'd make a nice Christmas candle.)
I don't really know what to say here. People have the right to be the way they are.
Yes.
And mothers have the right to be distressed, even if they're "iconic" (and you know what I think of that word). Cher is the Comeback Queen, and will use whatever is current in her life (including a dead ex-husband or a daughter who's a man) to get back into the limelight. And she has been known to do emotional flip-flops, marry heroin addicts and other extreme things.
At 64, she no longer has any of her original parts. They've all been gradually replaced. So who is she? She should know something about manipulating your identity
surgically, and perhaps hormonally.
Maybe if Chaz were a slim, good-looking, metrosexual sort of man? Maybe if he looked like Jon Hamm or George Clooney or some other out-and-out fox?
Hell, maybe I'd take him on.
Posted by Margaret Gunning at 9:24 AM 2 comments: