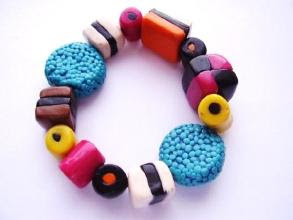 Quoted from Candyblog, the delectable link I provided yesterday. One of the best blogs I've seen in any category. Liquorice is not to my tastes: it reminds me of the dreadful liquorice "all-sorts" my Dad kept in the buffet drawer until they turned to dinosaur droppings. But this description of filled liquorice pieces is nothing less than lyrical:

"They were just a little sticky in spots but were fresh and moist. The bag smelled nicely of licorice and toffee with a little hint of smoke, beets and molasses. Each is about 3/4 of an inch long and varied in diameter, though most were about 1/3 of an inch.

The middle pieces, the light beige ones were a coffee flavored center. This was fascinating. I like the combination of licorice and coffee and it’s not an easy pair to find together. The center is a little grainy, like frosting. It’s sweet and has a very mellow coffee and toffee note to it. The licorice flavors and the texture of the licorice chew were at the front with the most dominance. I found myself picking through the package to find these.

The darkest looking centers were chocolate, I think. It was a sort of Tootsie Roll version of chocolate. There were some vague cocoa notes but it was rather empty and couldn’t compete with the licorice and sugar flavors.

The white ones appear to be mint. The mint fondant filling is soft with a bit of a crumble though not completely dry. The minty notes are peppermint and menthol. It’s a strange combination with the licorice, the whole thing has a medicated vibe but it’s also fresh and doesn’t feel heavy like some other licorice can. The mint though was very strong and overshadowed the licorice notes."

Hmmmm. I could almost eat these.
Posted by Margaret Gunning at 8:42 AM 2 comments: