The Ballad of Murphy G. 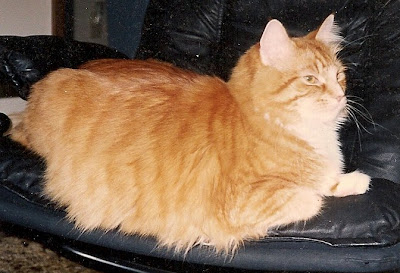 Inspired by a friend of mine, who enjoys writing doggerel, here's some catterel about an old friend who passed at the grand age of 17.

THE BALLAD OF MURPHY G.

I sing of Murphy, glad and proud
Whose meow could be so very loud.
Who loafed and purred in majesty
And honed his claws upon a tree.
When squirrels he saw, he meowed so strong
It sounded like a tiger’s song.
And dragonflies would hurry south
When Murphy caught them in his mouth.

White bib and mitties Murphy had,
And white tufts on his tootie-pads.
His weight in pounds we will not tell,
But as time passed, his tum-tum swelled.
His pads weren’t black, nor brown, nor green,
But the nicest pink you’ve ever seen.
His claws gave him the power and might
To thrash his pig both day and night.

He hated that black cat next door,
And in the yard they had a war.
Murphy chased him for three feet,
And black cat went home in defeat.
Up walls he ran when flashlights blinked,
And on his pants the fur was kinked.
He leaped on counters of great height
For doughnuts coated all in white.

But one sad day, the angels came,
And called our kitty by his name.
“Yes! I’ll come,” brave Murphy said,
“As long as I am amply fed.
I must have tuna every day,
And salmon in the month of May.”
”Good grief,” the God of Cats replied,
“I think the food I’d better hide.”
Yes, one sad day, the angels came
And home will never be the same.
The kitty box has disappeared.
The clean floors look and smell so weird.
And though his clumps we will not miss,
Nor puddles of disgusting piss,
Our Murph on furry wings will fly
To that Great Litter-box in the sky.
Posted by Margaret Gunning at 11:30 AM 2 comments: