Let's slip away, shall we? 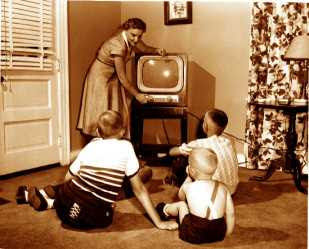 OK, was everything really brown then? Like it is right here?
I don't remember it being brown, but then, I was sitting in the middle of the floor sucking my fist (and come to think of it, I was probably sitting on something brown). Shadows of those early memories still pass across my neurons. They went like this: "SEE the real coffee flavor." "SMELL the real coffee flavor." "TASTE the real coffee flavor."
When I see these things again, and I just saw a slew of them on a not-very-good DVD compilation (too much repetition: do we really need 15 ads with Mr. Whipple squeezing the Charmin, or '60s color ads so degenerated you can't tell what they're selling?), it shakes something loose. I have a reaction. Maybe infantile,
I don't know.
When I saw that classic Maxwell House ad with the coffee percolator, geez, I could smell the goddamn coffee. It's probably the most brilliant ad ever made: starts with a very close shot of the top of a "coffee perc" (the only way to make it then), with that sound to represent the percolation, a sort of coconut-shell melody in irresistable intervals. The type of jingle that fries itself into your brain.
Then the voice-over telling us we WANT TO SMELL and TASTE that coffee. A shot of a very wide, round white cup on a saucer, surrounded by a lot of empty space, slowly being filled.
Then, total genius: a shot of someone picking up the cup and bringing it up to their lips, so that the steaming black coffee gradually fills the entire frame.
I won't tell you the rest. Lots of repetition. The use of circles (ask Walt Disney: that's why everyone loves Mickey Mouse). Clean, uncluttered images. Simplicity. This ad is fucking incredible, and I watched it maybe five or six times, then made my husband watch it while he shook his head at me.
Oh, and then! There were others. "Meet the Swinger, Polaroid Swinger." This was probably the first instant camera. They were "only nineteen dollars, and ninety-five". I don't know if I had one of these, or my brother did. The ad had Ali McGraw in it before she was anyone, and the camera ate her alive. I remember how you had to pull off a disgusting layer of goopy plastic film when the picture had developed, and the warnings not to get it on your skin.
Then this, oh yes: "It's new! It's now! It's flash cube!" This was an incredible invention that allowed you to take four pictures before you had to change the bulb.
Gear.
Beer tabs. This was announced as the greatest invention since the wheel. No more need for those pointy openers (all right, I know you've never seen one). You just - watch this - zip this strip off the top. The woman was left holding a 3-inch, curved, razor-sharp blade. People later reported ripping their feet open on these things. It took the industry a while to get them right. Once they were made smaller, people dropped them inside the can, then swallowed them. You can imagine.
Oh, and this was maybe my favorite. I love those old bubble-shaped cars out of the '40s, what I call Popeye and Bluto cars, bulbous and low-slung. Huge, by today's
standards.
By the '50s, cars had turned ugly. O-o-o-o-o-gg-leeee. I don't know how they ever got so ugly, and fins began to develop and gradually enlarge like mutant
appendages.
I sat through an awful lot of these ads, but the one that made me bark with disbelief was one that began, "They'll know you've arrived - when you drive up in the 1958 EDSEL!"
For those too young to know, Edsel was the white elephant of the car industry. Named after Edsel Pretzelgruber, it was considered to be a can't-fail deal.
Nobody bought it, and no wonder. This car was ugly enough to scare your mother. Enough said.
I liked this one. It was called Slip Away, and at first I thought it was sort of like Pam. It was an aerosol that you sprayed all over your frying pans to make food slide off. But something strange was going on here. You had to bake them in the oven for half an hour. Yes. Bake them. The coating would stay on "for months", though they later described it as permanent.
Well, we know why: the spray was made of Teflon. That's right. In those couple of months, your family would eat the Teflon right along with their fried Spam. This gave a whole new meaning to "permanent".
Various celebs popped up, and most of them were boring, but there were some incredible 15-second spots for Hefty Bags starring Jonathan Winters. These were weirdly funny, like Winters, but most of all they extolled the marvels and obvious virtues of plastic bags.
They were all good! And they kept the place clean and sanitary. This philosophy caught on too well, to the point that we're now having a spot of trouble keeping the planet clean.
Another fave little chuckle: in an ad for Bounty paper towels, a woman's trying to get some ketchup to come out of the traditional glass bottle, and it sprays all over the place. "Ohhhhh! I wish someone would invent ketchup that goes where you want it
to."
Well, dear, hm, yah, maybe, just maybe they've done that, but at what cost? Billions of plastic ketchup bottles sitting for centuries in landfills.
But a small price to pay for hitting that hot dog bang-on.
Posted by Margaret Gunning at 3:50 PM 1 comment: