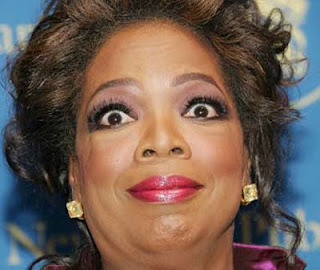 Is it my imagination, or does Oprah regularly decide to Change her Life by slavishly following a new guru, then replacing him/her once she gets tired of them and the bloom is off?

I just remember people like Sarah Ban Breathnach (who?), a lifestyle coach who used to come on regularly (but, unlike the male gurus, didn't get her own show). I wonder if she's still around, coasting on all that former glory, or languishing in remainder bins next to John Bradshaw.

OK, so this time Oprah tells us she has Found the Secret to weight loss and "food issues". And this time, boy, she really means it! I mean, really really really. It's all in this book by Geneen Roth, a formerly fat self-help/bestseller writer who has revealed an astounding fact: overeating, and food/weight problems in general, are often connected to larger emotional and spiritual issues.

Never having heard it before, Oprah was all over this idea like a mess of mashed potatoes with sausage gravy. In fact, during her "interview" with Geneen Roth yesterday, she monologued for 15 or 20 minutes about her own food problems, while Roth sat there nodding and saying "yes. . . yes. . . yes. . . ", her face arranged in what she hoped was a compassionate expression.

Food is tied to emotional issues? Ack! Oprah isn't the only one drooling over this thing, which is selling wildly, much as Women who Run with the Wolves did about a decade ago. (Take another look at that one and see if if it doesn't embarrass you.) Someone has been paying well-known self-help authors to salivate all over this book, or they wouldn't be praising a rival like this:

"Geneen Roth does it again! Women Food and God is absolutely mesmerizing. And loaded with insights which can change your life." - Dr. Christiane Northrup, author of The Wisdom of Menopause

"This is a hugely important work, a life-changer, one that will free untold women from the tyranny of fear and hopelessness around their bodies." - Anne Lamott, professional confessor/so-called counsellor/recovering sitdown comedienne.

OK, so obviously I don't feel very good about this book. Actually, it's not the book, and it's not even Oprah telling us the book has led her to "epiphany after epiphany" about making the connection between eating and emotional stress.

It's the fact that we've heard it all before, ad nauseam. All the elements get scrambled around, and the face of the author (usually compassionate and spiritual - and by the way, none of them are fat) changes with the seasons. Oprah leads the parade, beating her vast drum and insisting that this book, this author is the one who represents the one true religion about fat.

I feel sorry for Oprah, I really do. I think she is a sad woman who lost touch with herself long ago, and is now trapped in a kind of bizarre media godhood (goddess-hood?). What she says, goes. My prediction is that she will soon enter politics, and if a B-movie actor or a peanut farmer can make it to the Presidency, so can she.

I've been rather guiltily reading another best-seller, the Kitty Kelley tell-all bio, Oprah. It's not particularly charitable, but at the same time it's believable: the Big O has become a media behemoth, her ambition fuelled by a desperate attempt to outrun her traumatized past.

Much has been made of the fact that O has never had therapy, insisting that public confession is enough to heal her wounds. Her Kirstie-Alley-esque weight-bounces are beside the fact. But then again. . . Why this thundering response to a book that seems so self-evident? The Oprah who used to preach sermons when she was three (oh, maybe five) has stepped up to the pulpit again, insisting that THIS TIME we have found the answer. Not by dieting, not by agonizing or weighing, not even by joining Jenny Craig (like a lot of her "successful" guests). But by becoming spiritually aware. By realizing that we need to embrace the things we hate and fear the most.

OK: I have a few things that are hard to embrace.

Environmental meltdown. Oil spills. Random, vicious violence. All those little school children hacked to death in China. Drugs. Waste. The capricious, often horrendous turns of fate that can derail a human being for life. Cancer. Suffering. Pain of all kinds.
Global warming? You get the idea.

Even the things that lurk in my own psyche (jealousy, lust, anger, violent mood swings, loneliness, despair) are pretty gol-dern hard to embrace. I can't really see how embracing them will help. But then, I don't have a book on the bestseller list.

I predict that within one year, or maybe two, Oprah's miraculous weight loss under the Roth banner will have bounced again. And she will once again be fishing for people who insist they have discovered The Secret.

Speaking of, wasn't there a book by exactly that name that Oprah touted not so long ago? Its main premise was that you can get anything you want - anything - just by wanting it badly enough. A woman wrote in to Oprah claming that she had cured her breast cancer this way (prompting the producers to send her a frantic note).

Then came the news headline: this particular guru, James Ray (no relation to James Earl Ray) had been performing endurance tests on his disciples, including an extremely hot sweat-lodge that caught fire, killing several people.

The answer? I'm not even sure I know the question yet.
Posted by Margaret Gunning at 8:05 AM 2 comments: