It's my blog, and I can tell cat stories if I want to! 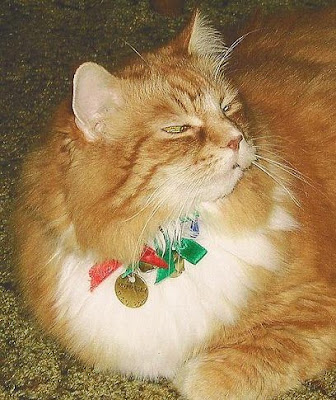 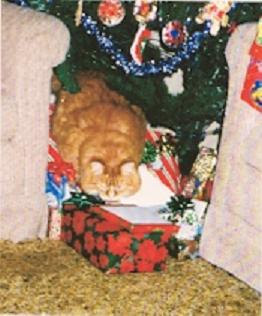 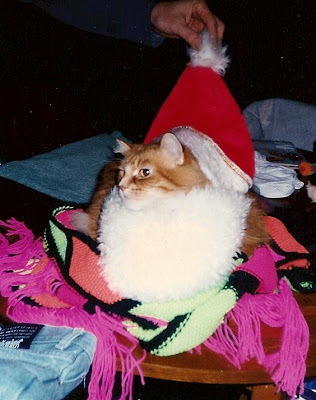 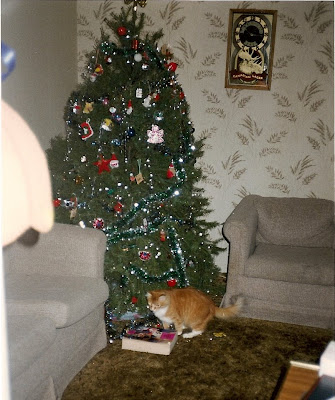 At this festive time of year, when our brains all turn to mush, it's nice to reflect on Christmases past. Isn't it?

We had a cat for 17 years. A cat who dominated the household in more ways than one. His furballs were life-threatening hazards, and his continual meowing for forbidden tuna or ham could grind down a human nervous system to the point of collapse.

Murphy was such a fuzzy little cuteball when we first took him home. But there was something ominous about him: his paws were huge, with big tufts of white fur growing out of the fat pink pads. Along with the tufts at his eartips, this made him look a little like a lynx. Soon he grew into those paws, then morphed (Murphed?) into one of those big sedentary housecats that look like permanent home installations.

But this is a seasonal story: Murphy's First Christmas, a sentimental tale laced with unexpected violence.

When he was only about 8 months old, we brought a fresh Christmas tree into the house (the last time we ever did it), and Murphy just went wacky. This thing wasn't supposed to be inside the house. It smelled pungent and outdoorsy, and it had bugs and other things in it. This tripped off something in his primitive little triangular cat brain.

He would sniff at it delicately, and the fur would rise on his back like some ludicrous orange Mohawk. But we thought he'd get to like it, or at least get used to it.

I'm not sure who witnessed this first-hand (or did any of us? It was a long time ago.) Anyway, at some point the 8-month-old lynxy-cat gathered himself up, waggling his behind for a huge pounce, then sprang into the air and grabbed hold of the tree about 1/4 of the way down. It didn't just bend: it collapsed completely, sending ornaments (including heirloom glass ones) flying all over the room. Worse, the big thingie of water that the tree was sitting in tipped over, saturating the rug. The cat wouldn't let go right away. He was stapled on. Finally, with a feral snarl, he popped off and ran around and around the house with his tail kinked up. Then he disappeared under a bed somewhere and didn't come out for half a day.

Uhhh, it was a mess, and only funny in retrospect. Kind of like his savage chasing down of a neighbor's black cat in our back yard, tearing through the bushes until the intruder leaped over the fence. At which point Murphy would put on the brakes, sit down and begin to groom himself like nothing had happened.

In spite of his flashes of savagery (including leaping 3 feet in the air and catching a dragonfly in his mouth), he didn't look like much of a hunter. He was fat. FAT fat. At his fattest, he weighed about 22 pounds, though I swear to God we didn't feed him much. (The vet thought we were lying). He was only sick once, when he nearly died of liver disease and had to have surgery. He came home like an empty sack of fur, but, as cats will, he dramatically rose from his own ashes when he realized we were going to feed him straight tuna until he recovered.

There's one other funny Murphy story, except that it's kind of macabre. As he passed the 17-year mark, he began to dwindle down, to become more clingy, to eat less. He didn't see well or hear well, and even walking was hit-or-miss. Toilet habits all came undone. We knew it was only a matter of time.

One evening, he began to act very strangely. He was staggering like he was drunk. Bill and I looked at each other. "He can't even hold his head up," Bill said.

It was plain the end was near, but it was far too late to take him in to the vet's. We tried to get him settled for the night, though he stubbornly kept trying to go upstairs.

Bill gets up very early, but I don't. For some reason on that particular morning, I did get up early, and noticed Bill making his lunch. I asked, "How's Murphy?", and he gave me a weepy thumbs down.

"Yes. It just looked as if he was sleeping."

"Yeah. Except he was stiff."

We burst into guilty laughter. Then we had to find a suitable cardboard box for a stiff dead cat. When we carried him in to the vet's office where he had been a client for his entire life, the vet, a jaunty fellow who never seemed to be in a bad mood, beamed at us and exclaimed, "Oh! Is this Murphy?"

We were barely able to restrain ourselves until we paid the cremation charge and got out the door, then doubled over.
&&&&&&&&&&&&&&&&&&&&&&&&&&&&&&&&&&&
POST SCRIPT. I think I may have told these stories in a previous post. Can't remember. But don't we always repeat the same shit every Christmas, It's a Wonderful Life and all that?
Posted by Margaret Gunning at 9:18 AM